TPP vs. RCEP: America and China Battle for Control of Pacific Trade 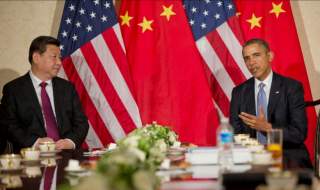 Within hours of President Obama’s announcement of the Trans-Pacific Partnership agreement on Monday, the landmark deal looked like it had already run into trouble in the U.S. Congress. The influential Nelson Report suggested the pact might be “DOA”—dead on arrival. The Senate and the House get an up-or-down vote on “the most ambitious trade pact in a generation,” and opponents were lining up early to criticize its terms.

The issue for America is not, as some think, TPP versus no TPP. The issue is whether the Asia-Pacific region follows Washington’s vision of trade or Beijing’s. As President Obama noted in his statement on Monday, “When more than ninety-five percent of our potential customers live outside our borders, we can’t let countries like China write the rules of the global economy.”

And whoever writes those rules also sets the template for trade agreements elsewhere. The Trans-Pacific Partnership, therefore, is more than just about the Pacific as it could end up as the model for future deals. And as important, geopolitical influence will undoubtedly follow trade in East Asia, as it already has in recent years.

And the pact’s membership is not closed. As Joshua Meltzer of the Brookings Institution notes, the TPP is “an open platform.” Already, the Philippines, South Korea, Thailand and Taiwan have expressed interest in joining.

India for the moment is outside the TPP tent, but the missing giant that everyone talks about is, of course, China. The comprehensive free-trade pact—the agreement will reduce or eliminate tariffs in nearly 18,000 categories of goods—is often viewed as part of Washington’s effort to contain Beijing, but it’s more accurate to say China contained itself. Beijing, after all, had been invited to become part of the initial group negotiating the deal but declined. Later, Chinese officials “put out feelers,” as Obama noted in June, but then it was much too late to join the discussions which were then in their eighth year.

The truth is that China’s leaders know their country has to remain outside the TPP because they cannot sign onto the “high standards” that are incorporated into the structure of the pact. Even if China could somehow meet labor, food safety and environmental rules, it would have to adhere to restrictions on the business activities of state enterprises, which would mean a fundamental change in the Chinese economic model and permit wider internet access, which would strike at the heart of the Communist Party’s quasi-monopoly on information.

Furthermore, China would have to further open its services sector. At the moment, Beijing cannot even agree to allow investment in a few protected areas, which has stalled agreement on the long-awaited Bilateral Investment Treaty with the U.S.

Liberalization would be good for China: a bonanza awaits Beijing should it decide to make the reforms necessary for TPP inclusion. In a 2014 study, Peter Petri of Brandeis University, Michael Plummer of John Hopkins and Fan Zhai of China Investment Corp. estimate China, if it were to join TPP, could reap income gains of $809 billion by 2025. If it fails to do so, however, it might lose over $46 billion by that year.

This should not be a mystery to Chinese leaders. Their country reaped large gains after it joined the World Trade Organization in December 2001, due mostly to the reforms required by its accession agreement. The big story is that today, despite the obvious benefits of being a signatory to the Trans-Pacific Partnership agreement, there is no longer a consensus in Beijing to accept liberalizing change.

In fact, there is a consensus to reject it. Many people say Chinese President Xi Jinping is trying to reform China, but that is misleading. It’s true he’s responsible for the issuance of an impressive restructuring plan in November 2013 at the Communist Party’s Third Plenum, but since then there has been little implementation.

Instead, Xi has been leading China back to a 1950s-inspired system of increased state involvement. Among other things, he has effectively been shutting his country’s market off to foreign companies with highly discriminatory prosecutions, he has been increasing state-directed investment, he has authorized a partial renationalization of enterprises and he has recombined already large state businesses back into formal monopolies. On top of this, Xi is pushing a number of national security laws and regulations that will effectively prevent foreign companies from doing business with state enterprises.

His reaction to the stock market slide has been to outlaw many forms of selling, his remedy for the outflow of capital has been to impose restrictions on legitimate fund transfers, and his solution to the currency crisis he created has been direct and unprecedented intervention in both domestic and foreign markets.

Xi Jinping, in short, has moved China even further away from a domestic economy that is compatible with a rules-based, open trading regime that is at the core of the Trans-Pacific Partnership.

China’s version of global trade is found in the far less rigorous Regional Comprehensive Economic Partnership, which would include nations with about 30% of global GDP but exclude the U.S. In addition to China, the proposed pact would include the 10 member states of the Association of Southeast Asian Nations, Australia, India, Japan, New Zealand and South Korea. RCEP, as the Chinese-backed free-trade agreement is called, “will not achieve a level of ambition or comprehensiveness to provide a real alternative to the TPP,” as Meltzer, the Brookings scholar, tells us, but it will nonetheless form the center of East Asia’s trade regime if the Trans-Pacific Partnership does not come into existence.

What else is at stake? On Monday, Japanese Prime Minister Shinzo Abe called the TPP “a far-sighted policy for all participating countries that share the same values and are trying to build a free and fair economic zone.” China, as it tries to defend its outmoded system, challenges both those values and the principles of economic freedom and fairness.

That set of challenges has geopolitical implications. Defense Secretary Ashton Carter in April said the TPP was worth an aircraft carrier.

Beijing would rather face one more American flattop than an American-led trade grouping. With their peculiar view of the world, Chinese leaders are now seeking to use trade clout to enforce their China-centric—and narrow—vision. For example, they obviously do not subscribe to the concept of a global commons. On the contrary, they are working to exclude others from their country’s periphery, especially the international waters off their shores, the Yellow Sea, the East China Sea, and the South China Sea. A staggering $5.3 trillion of commerce crosses on and over that last body of water each year.

One vision will eventually prevail, Beijing’s closed one or the open system embodied in the Trans-Pacific Partnership. Congress, as it considers TPP, has a once-in-a-generation opportunity to affirm the principles underpinning the post-war order, which has for decades ensured peace and stability in Asia and elsewhere.