A Trade War with China Is Not in America’s Interest 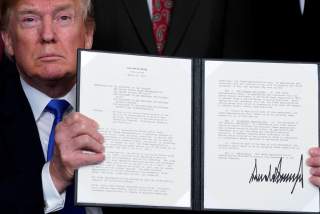 A trade war with China would inflict far more damage on the American economy than could be recouped from tariffs and other protectionist levies.

That’s the problem with the Trump administration’s unilateral action, taken under Section 301 of the Trade Act of 1974, to levy punitive tariffs punitive tariffs on up to $50 billion of goods from China. Already that decision has prompted a retaliatory response from Beijing that targets 128 American products ranging from soybeans, wine, and various fruits to steel pipes and ethanol. These Chinese taxes on American exports, and higher prices from U.S. taxes on imports, could have wide-reaching negative impacts for the U.S. economy.

Beijing has long used coercive tactics to force American companies to transfer intellectual property (IPR) worth billions into Chinese hands. But countering those abuses with tariffs and sanctions on Chinese imports is not the way to go. In addition to penalizing American consumers, such actions also violate America’s commitments to the World Trade Organization.

My Heritage colleague Riley Walters recommends that the administration and Congress avoid heavy-handed trade restrictions and instead take vigorous steps to protect IPR while staying true to core American values. He urges the U.S. government to pursue complaints about lack of access to China’s market, including the filing of additional WTO cases, thereby allowing U.S. companies to remain on the ground in China and take advantage of the growth potential of China’s economy.

Another colleague, trade economist Tori Whiting, questions whether the Office of the United States Trade Representative conducted a full economic cost-benefit analysis of tariffs on imports from China under Section 301. Did USTR present President Trump with comprehensive information about the impact of those tariffs before he made the decision to levy them? Did the president have a complete picture of the many potentially negative consequences the tariffs would create for American workers?

Whiting cites a letter from dozens of U.S. business groups, warning the president of a “chain reaction of negative consequences” arising from tariffs. Among those consequences: reduced U.S. exports; higher costs for American businesses and consumers (especially for electronics, apparel and other consumer products); and reduced manufacturing competitiveness, due to artificially higher costs of imported intermediate goods. Meanwhile, the business groups cautioned, the fundamental challenges posed by unfair and discriminatory Chinese trade practices would remain unaddressed.

Dr. David Kreutzer, Heritage’s senior research fellow for labor markets and trade, praises the Trump administration’s record for cutting regulations and taxes. Yet, he notes, the 301 tariffs announced this week (and earlier tariffs levied by the administration on steel, aluminum, solar panels and washing machines) actually amount to new taxes and an increased regulatory burden on companies to comply with the new trade restrictions. The end result of this wealth transfer “from the politically impotent to the politically powerful,” Kreutzer warns, will be a weaker American economy.

Finally, and perhaps most importantly, is the impact of the Trump administration’s protectionist policies on American economic freedom. Over the last two decades The Heritage Foundation’s annual Index of Economic Freedom has consistently demonstrated that economically freer countries—those such as the United States that have opened their societies to new ideas, products and innovations—have largely achieved high levels of social progress.

Centrally-planned economies, such as China’s economy, do not produce the most positive social outcomes. If China wishes to achieve real social progress, it will have to expand economic freedom—and that means lower barriers to market entry and allowing its citizens and companies greater freedom to engage with the world with less government intrusion.

The performances of the two countries in the Index speak for themselves. America ranks eighteenth freest among the 180 countries measured in the 2018 Index, while China remains way down the list in 110th place. In the long run, China will remain economically repressed unless it shifts its economic policies. And economic freedom in America will suffer if Washington embraces the new protectionism.

James M. Roberts is Research Fellow for Economic Freedom and Growth in the Center for International Trade and Economics, of the Shelby and Cullum Davis Institute for National Security and Foreign Policy at The Heritage Foundation.