The Trade War Is Justified 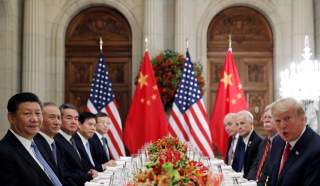 The raging U.S.-China trade war has inspired much commentary on America’s China policy. The conventional narrative among the foreign-policy establishment is that the United States has engaged with China because for too long, Washington has mistakenly believed that trade would weaken the Chinese Communist government and bring greater political freedoms to China.

Increasingly, one could walk away from such discussions not knowing that two decades ago, U.S. support for China’s entry into the World Trade Organization (WTO), which drastically expanded Washington-Beijing bilateral trading relationship, had anything to do trade and economics.

Certainly, China has disappointed Washington both politically and economically, and has emerged as America’s most potent strategic rival. Yet devising solutions to China’s challenge requires that policymakers not fall into amnesia. As such, a walk down memory lane is a useful exercise.

Today, a broad consensus has emerged on both the left and right that China simply has not become the responsible stakeholder in the international system that then-Deputy Secretary of State Robert Zoellick exhorted it to be in 2005. “Closed politics cannot be a permanent feature of Chinese society,” Zoellick said, summing up many U.S. policymakers hopes. “It is simply not sustainable—as economic growth continues, better-off Chinese will want a greater say in their future, and pressure builds for political reform.”

The Trump administration, for one, believes that these assumptions have turned out to be false. In its National Security Strategy (NSS) of 2018, the administration spelled out its frustrations. “For decades,” the NSS said, “U.S. policy was rooted in the belief that support for China’s rise and for its integration into the post-war international order would liberalize China.” Instead, today’s stronger and richer China wants to “shape a world antithetical to U.S. values and interests. [It] seeks to displace the United States in the Indo-Pacific region, expand the reaches of its state-driven economic model, and reorder the region in its favor.”

While this is all true, American hopes for Chinese political liberalization were not Chinese promises. The Chinese Communist Party embraced reforms necessary for modernization and economic growth, but it had never promised to relinquish political power if China got richer.

Washington should not be surprised. Prior to supporting China’s entry into the WTO, Washington engaged in a prolonged and raucous policy debate about whether this was wise.

The U.S.-China Economic and Security Review Commission, a bipartisan congressional entity established after the United States gave the nod to China’s accession, summarized the opposition in its first report to Congress in 2002: “[M]any leading experts are convinced that certain aspects of our policy of engagement [with China] have been a mistake. They argue that [China] face enormous economic and social problems, that its leaders are intractably antidemocratic, that they are hostile to the U.S. and its prominent role in Asia, and that we are strengthening a country that could challenge us economically, politically, and militarily.”

“[I]f China becomes rich but not free,” the report continued, “the United States may face a wealthy, powerful nation that could be hostile toward our democratic values, to us, and in direction competition with us for influence in Asia and beyond.”

Today, more and more policymakers are coming to the conclusion that that is exactly what has happened. Yet they seem to have forgotten that the central rationale for America to trade with China was the benefits of trade itself.

While successive presidential administrations—until the current one—did harbor hopes for a freer China, they were also convinced that trading with China would (and did) benefit America’s commercial interests, boost its economy, and usher in more economic freedom in China.

When pushing for Congress to approve of the U.S.-China trade agreement that paved the way for China’s accession to the WTO, then-President Bill Clinton said ramping up trade with China would advance America’s economic interests. “Economically, this agreement is the equivalent of a one-way street. It requires China to open its markets—with a fifth of the world’s population, potentially the biggest markets in the world—to both our products and services in unprecedented new ways.”

“For the first time,” Clinton promised, “our companies will be able to sell and distribute products in China made by workers here in America without being forced to relocate manufacturing to China, sell through the Chinese government, or transfer valuable technology—for the first time. We’ll be able to export products without exporting jobs.”

Alas, not all of those promises panned out. China did cut tariffs, but it has brazenly stolen U.S. intellectual property and forced American companies to transfer technology in exchange for market access. The U.S. Trade Representative estimates that theft of American IP by China costs the U.S. economy between $225 billion and $600 billion annually. Furthermore, millions of manufacturing jobs have been lost due to China’s economic rise.

The Trump administration is right to hold China accountable for its illicit trading behavior.

It would, however, be disingenuous to pretend that no trade benefits have resulted from the U.S.-China relationship. According to the Congressional Research Service, in 2018, China was America’s “largest U.S. merchandise trading partner (total trade at $660 billion), third-largest export market ($120 billion), and largest source of imports ($540 billion).” China is also America’s largest foreign creditor.

Experts have pointed out that trading with China has resulted in increased U.S. exports, domestic job creation, and cheaper consumer goods for Americans. There is also high profitability for U.S. companies operating in China, along with a vast expansion of the private sector in China.

As experts lament that China has not become freer or more responsible, the one person who has not lost sight of the fact that America’s decision to trade with China was at least in part about trade is President Donald Trump. He has noisily and seemingly happily waged a trade war against China because he believes it has “raped” the United States with its trade policies. He has expressed little to no interest in whether China has liberalized in the past two decades or whether it will become a more responsible stakeholder in the world.

If the president gets a trade deal with China, then he will have little interest in the misplaced assumptions of the Washington foreign-policy establishment hopes and dreams for China from the past twenty years.

The question for that establishment is what will they do then? Will they take some time to reflect on how they got things so wrong on China? Will they recognize that there are concrete benefits in the Sino-American trade relationship and that the pursuit of economic freedom can be viewed independently as a moral and material good rather than as a mere means of attaining political freedom?

Washington’s policymakers will need to weigh these interests and benefits against other drawbacks to devise better policies. That would be a lot better than deluding themselves on past mistakes and successes.

Ying Ma is the author of “Chinese Girl in the Ghetto,” which was released in audiobook in 2018. During the 2016 election, she served as the deputy director of the Committee for American Sovereignty, a pro-Trump super PAC, and the deputy policy director and deputy communications director of the Ben Carson presidential campaign. Follow her on Twitter @GZtoGhetto.