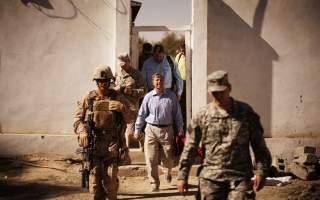 Old myths never die. So it is with the fable that neoconservatives and liberal interventionists alike keep telling: that President Bush left Iraq in pretty good shape in 2008 before President Obama’s withdrawal of U.S. troops in 2011 created a strategic opening for Iran today.

Take the Wall Street Journal’s recent editorial. The Obama administration, we are told, is primarily responsible for Iran’s military surge in Iraq. After all, the withdrawal of U.S. troops in 2011 helped destroy the sectarian peace that Washington had brokered following the surge in 2007. And the failure to deploy U.S. ground troops or rally a coalition of surrounding Sunni states to fight the Islamic State created security vacuums for Tehran to exploit.

Never mind that the U.S. troops left Iraq according to the very timetable President Bush himself had negotiated with Iraqi prime minister Nouri al-Maliki in 2008. Never mind the hatred and rivalries that are so much a part of Iraqi religious and tribal animosities were bound to erupt in the absence of a strong unitary state.

The point here is that the Journal, like most supporters of the decision to invade Iraq twelve years ago, still can’t acknowledge the taproot of today’s disaster: the toppling of Sunni rule that led to the Shia ascendancy in Baghdad.

Go back to those heady days in the lead up to Operation Iraqi Freedom. The hawks—from Christopher Hitchens, Paul Berman and the Washington Post editorial page on the left to William Kristol, Robert Kagan and the Journal editorial page on the right—had confidently predicted that the “liberation” of the Iraqi people from a brutal dictatorship would lead to a flourishing democracy and viable state.

But the unintended consequences of the war were not just the dear costs in blood, treasure and prestige for the United States. Nor were they the hundreds of thousands of deaths of Iraqi civilians. They were what amounted to a strategic victory for the Islamic Republic of Iran.

Tehran’s presence in the Shia south, moreover, was felt well before the withdrawal of U.S. forces. Recall that General Qasem Soleimani, the commander of the Revolutionary Guards’ Quds Brigade, spearheaded Iran’s political and military involvement in Iraq a decade ago. Recall, too, al-Maliki’s debt to Iran in helping secure his presidency in 2006.

By toppling a Sunni regime and bringing democracy to Iraq, the U.S.-led coalition brought to an end the sectarian imbalance that had been in place for generations. The Baathists, like the Hashemites, British and Ottomans ­before them, had kept in place minority rule, giving Sunni Arabs a disproportionate share of power and resources while brutally suppressing Shia and Kurds.

In his award-winning 2006 book, The Shia Revival, Vali Nasr observed:

The Shia still fear Sunni rule, and Sunnis rue their loss of power and dream of climbing back to the top... Each has a different vision of the past and a different dream for the future. There are still scores to settle, decades of them.

To say again: the invasion in 2003 meant that the majority Shia became the new winners in post-Saddam Iraq; and the minority Sunnis the new losers. The former turned to their Shia brethren in Tehran for support; the latter turned to a Sunni insurgency that has morphed into a plethora of Sunni jihadists, including the Islamic State.

Now the chickens are coming home to roost. Sectarianism remains ascendant. The Iraqi state as the world has known it since the collapse of the Ottoman Empire nearly a century ago is coming apart. Portraits of Iran’s late Ayatollah Ruhollah Khomeini and his successor Ayatollah Ali Khamenei litter central Baghdad. And the only group capable of liberating Sunni strongholds, such as Tikrit and Mosul, from Sunni jihadists are the Iranian-backed Shia militias.

One senior Bush administration official who never bought the neoconservative myths was Christopher Hill, a former ambassador to Iraq. In Outpost: Life on the Frontlines of American Diplomacy, Hill argues:

The failure of neoconservatives and their fellow travellers to explain what they were trying to accomplish in Iraq remains one of the most disgraceful performances by a foreign policy class in America. It has been a failure to acknowledge mistakes, and a shameful effort to shift the blame, in the case of Iraq, to nameless intelligence analysts, as if they were responsible for the full-court pressure on President Bush to convince him to go to war. They quickly attacked Obama, and like architects who blame the builder, they never tire of offering bad advice then attack the implementers for not following their plans to the letter.

. . . they bear much responsibility for reducing America’s own discourse on foreign policy to little more than a barroom brawl. They have much to answer for. Perhaps, for starters, they could observe a period of silence while the rest of us try to deal with the practical realities of a difficult global structure.

According to Hill, “a majority-ruled Iraq, which necessarily involves Shia leadership” was never going to become “an inspiration to the Sunni-dominated Arab Middle East.” Nor was it likely to shun a close relationship with Shia Iran.

Just don’t tell the fairy-tale writers at the Journal.

Tom Switzer is a research associate at the University of Sydney’s United States Studies Centre and host of Between the Lines on the Australian Broadcasting Corporation.