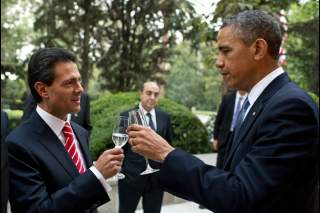 The global economy is struggling to find growth stories. China is slowing, Europe rebounds in fits and starts, and commodity-exporting economies are increasingly feeling the pressure as prices relentlessly fall. However, after a decade or more of being stuck in the middle-income trap, Mexico is poised to break out—and the Trans-Pacific Partnership could be its long-sought-after catalyst.

Mexico reached “middle-income” status long ago, and GDP per capita growth proceeded to stall out. Mexico is the poster child for this concept of fast, above-average growth followed by stagnation. As Pritchett and Summers point out, a common misconception of the middle-income trap is that somehow, at a magic level of development, growth becomes harder to find. Instead, the slowing of growth is a regression to the mean—fast growth portends future slow growth.

Mexico is in need of a catalyst, and not only does the TPP open new markets for Mexican exports, but it potentially provides the administration of Peña Nieto with the necessary cover to enact politically difficult changes to labor markets and state-owned enterprises.

In joining the TPP, Arturo Sarukhán, then ambassador to the United States, stated it was a chance to renegotiate the North American Free Trade Agreement (NAFTA) without reopening the actual agreement. The TPP has not been without its setbacks, including the most recent delay of the agreement, but renegotiating NAFTA would be far more difficult politically and otherwise. And this points to something deeper in the mentality of the Mexican negotiators. The strengthening of economic ties with the United States may be the most important aspect of the TPP agreement for Mexico.

With 70 percent of its exports headed to its northern neighbor, part of Mexico’s need to join the TPP is to defend its share of the U.S. export market. The Mexican economy is heavily reliant on the United States for trade, and, before entering the TPP negotiations, was vulnerable to having its privileged trade status with the United States eroded. After all, many of the Asian economies party to the agreement compete directly with Mexico for manufacturing exports and employment.

Furthermore, as the U.S. dollar has strengthened, many emerging markets are suffering from investment outflows and current account issues. Mexico is not immune to this syndrome. But the side-effects could be mitigated through continued progress in economic reforms. A particularly good example of this is India, which has seen significant investment inflows following the election of Modi (and Rajan at the central bank). Mexico could see long-tailed and persistent flows, given its long-term promise.

The TPP could go a long way in driving these shifts. A cheap Peso and low transportation costs to the United States make Mexico a viable option for outsourced U.S. manufacturing. An often-overlooked aspect of Mexico is that a more open Mexico would allow U.S. businesses to be more competitive on a global scale. As the Euro and Yen have deteriorated against the U.S. dollar, the ability of U.S. exporters to compete is increasingly challenged. But with the Peso and proximity, Mexico may provide a viable solution to the weakening competitiveness of U.S. firms. Investment from U.S. multinationals looking for a competitive advantage in an increasingly more cutthroat global environment may drive investment to Mexico. Cheaper transport costs and a weak currency make Mexican exports drastically more competitive in the near term, and may even allow for more direct competition with Chinese exports.

Obstacles to Mexico’s resurgence remain, and poised does not mean a resurgence is imminent. Politics are messy, and entrenched interests are unlikely to stand aside. An ongoing saga of drug cartels and their corruptive political influence is a discouragement to long-term investment regardless of the promises made by politicians. Along with a rising dollar and current account pressure, these could derail—at least temporarily—the reemergence of the Mexican economy.

For Mexico, the TPP is not a story of merely maintaining its share of trade with the United States. The intriguing storyline is Mexico’s ability to deepen its position in global supply chains, and manufacturing gives it a unique ability to gain share in a global economy with few real growth areas. Not to mention, its currency is weakening dramatically against the dollar without internal stimulus measures. Meanwhile, its largest trading partner is slowly recovering from a deep recession, and should, theoretically, demand more imports. With a cheap Peso, low shipping costs and cheaper labor than its NAFTA (and soon-to-be TPP) neighbor, Mexico may be ready to break out of its slumber and finally grow out of its middle-income slump.