A Transatlantic Strategy to Check China’s Belt and Road Initiative 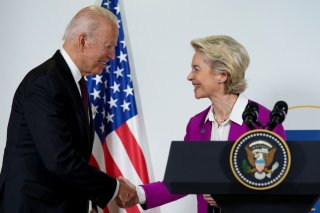 Eight years after the announcement of the Belt and Road Initiative (BRI)—conceived first as One Belt, One Road—the European Union (EU) has a good plan to counter it and become a stronger geopolitical actor in an era of strategic competition. While European policymakers seem to have awakened to Chinese economic and geopolitical designs, several European capitals are still struggling to find the correct balance between the core principles of economic openness and security concerns related to a bigger Chinese footprint in Europe. In a seismic diplomatic shift, the EU Commission now views China as an “economic competitor” in the pursuit of technological leadership, and as a “systemic rival” promoting alternative models of governance.

Since 2013, most Chinese projects in Eurasia have been incorporated into the BRI, the brainchild of President Xi Jinping a foreign policy narrative that exports the “China Dream” that was cemented into the Chinese Communist Party’s constitution during the Nineteenth Party Congress. Today, the BRI includes more than 130 countries and international organizations, accounting for 40 percent of global GDP and more than 60 percent of the world’s population. Emulating the ancient Silk Road, BRI spells out the new Chinese international vision, aiming to place China as a leading power on the world stage, with a greater ability to shape global rules, norms, and institutions. China seeks to accomplish these goals by building infrastructure and networks, while rallying diplomatic and political benefits to Beijing.

In line with this vision, Beijing is expanding Chinese outreach in the global economy, reducing its technological dependence on the West—in line with its “Made in China 2025”—and maintaining a favorable external influence while addressing domestic challenges.

The BRI is an economic and geopolitical necessity for Beijing. It is needed to unlock the potential for new sources of growth and export markets for China’s excess industrial capacities in its struggling industries (construction, steel, and cement), to diversify China’s supply routes, to support internalizing Chinese companies, and, finally, to advance innovation.

Despite Beijing’s significant investment to strengthen the BRI’s narrative power—focusing on the mantra of a “win-win” strategy, promising to advance global development, and presenting China as a benevolent rising power—BRI has become controversial and caused a backlash in several countries. The BRI’s large infrastructure projects present considerable risks from debt sustainability to governance, environment, and social risks, exacerbated by the lack of transparency and openness of the platform, and the weak governance issues in several of the participating countries. Even before Covid-19, the World Bank estimated that nearly one-third of the initiative’s partner nations were at high risk of debt distress.

There are justifiable concerns about the lack of transparency in the resources that have been allocated to the BRI since 2013. Estimates are wide-ranging: from $4 to $8 trillion announced by the Chinese, to $800 billion by the Global Investment Tracker of the American Enterprise Institute, down to $575 billion estimated by the World Bank. Two-thirds of Chinese spending (mainly loans) on completed projects has gone into the energy sector and transport, and 60 percent of the Chinese-funded projects go to Chinese companies. These facts bolster the claims of Chinese internalization—and, when the BRI was announced, Beijing incorporated projects that had been underway for decades under the new BRI umbrella.

Initially seen as an opportunity for European economic recovery after the 2008-09 Eurozone crisis, the EU took a cautious approach towards the BRI. However, it soon became clear that the BRI’s promised global development created challenges for the EU’s economic norms, standards, and efforts to further its liberalization.

In fact, as the EU was trying to understand Chinese engagement in Europe, Beijing was carefully targeting countries in Central-East and South Europe by signing bilateral agreements. Today, seventeen EU countries are official BRI members, including eleven of them that are part of the 16+1 Initiative with Eastern Europe and Western Balkans. For Beijing, membership is a victory. It is noteworthy that Italy, a G7 member and a large EU economy, is part of the BRI, even as countries like Austria, another country that was keen to join the project in 2017, has since backed away due to new security and economic developments in Europe.

Although Europe has traditionally been slow to react to an increasingly assertive China, in September 2018 the E.U. Commission published its Connecting Europe and Euro-Asia strategy. The document was an attempt to formulate the European vision on connectivity and infrastructure development based on Western economic and institutional norms and principles. The strategy set forth the conditions for European cooperation and was seen as a blueprint to support European values and standards on “connecting Europe and Asia.” But despite bold ambitions, the proposal was not backed by euros.

This is why the Global Gateway, the new EU strategy, is good news; It is evidently intended to counter the BRI in light of growing concerns over China’s assertive foreign and economic initiatives. The Global Gateway was introduced by Ursula von der Leyen, the president of the EU Commission, as a much-needed step outwards for the EU in investing strategically worldwide. The Global Gateway is a massive investment platform of sustainable and quality projects in infrastructure and skills, in line with the green and digital transition that plans to mobilize $340 billion between 2021-2027, with $150 billion of financing for guaranteed investment for infrastructure, $20 billion in grant funding from the EU budget, and another $160 billion of planned investment from European financial and developmentally-focused financial institutions.

In geo-economic terms, the Global Gateway will help the EU compete in the global economy. In the last thirty years, the European economy has grown by 2.5 times, while the Chinese economy has grown by almost forty times. In 1990, China’s economy represented 4 percent of global GDP (based on purchasing power parity), and, in 2021, is now 18 percent of the global economy. Meanwhile, the EU share in the global economy has shrunk to 15 percent down from 25 percent in 1990, according to IMF data. As a result of the industrial off-shoring and transfer of the global value chains and new technologies, China has become not only the largest exporter of goods in the global economy, accounting for 18 percent of the share of world exports, but it has also created some dangerous strategic dependencies on Chinese goods for Western countries, as seen during the Covid-19 pandemic. These dynamics will have important and wide-reaching ramifications for Europe’s prosperity, from trade to security.

There is a need to better assess and understand risks and opportunities emerging from the BRI. The EU should not only build a solid assessment of the BRI, but also establish a common European and transatlantic position. If left unchecked, the BRI could challenge EU and transatlantic cohesion. Some European economies might welcome Chinese investment as a source of financial capital, infrastructure development, and market opportunities. This concern might bring diverging views inside the EU due to diverging interests relative to the strengths and needs of European national economies. Therefore, assessing the risks that these investments entail could be challenging. To be clear, the BRI is not simply about infrastructure projects and financial repercussions, it is about norms, values, and standards and the future of the rules-based international order.

To counterbalance the BRI, the transatlantic community needs not only to better market what is already doing, but to also develop a new strategy that offers targeted countries greater opportunities. The G7 leaders committed at the last summit to develop a massive development infrastructure plan focused on “values, high-standards, and transparency” to narrow the existing $40 trillion infrastructure gap in the developing world by 2035. The Build Back Better World (B3W) initiative led by the United States serves as a catalyst to stimulate public-private partnership funding in line with climate and health security, digitalization, and equality.

B3W builds on the U.S. Blue Dot Network, a collaboration that aims to build a global network through lending-based financing to build roads, bridges, airports, ports, and power plants in developing countries. To achieve the global development goals, the World Bank estimates that around $1.5 trillion per year should be invested in infrastructure. This is why it should be based on a coordinated plan. Different partners will certainly have different geographic and economic orientations, but the sum of the coordinated initiatives will make it possible to cover low- and middle-income countries across the world and increase their impact and reach.

The EU and the United States should do a better job at communicating their existing development programs in a coherent narrative to compete with China. It’s not only about new resources, but about using the existing ones more strategically and in accordance with a sound transatlantic strategy. Take the Global Gateway as an example. The $340 billion is mainly a mixture of existing commitments (grants, loan guarantees) of the EU that need to be streamlined under a single and recognizable brand. The West needs a comprehensive transatlantic plan to entice private investment and capitalize on financial resources from both sides of the Atlantic while working closely with multilateral development banks and international financial institutions. To persuade private investors to put capital into high-risk infrastructure projects in the developing world, we need a visionary plan of bankable and coordinated projects, based on private-public transatlantic coordination.