Transforming India from a Balancing to a Leading Power 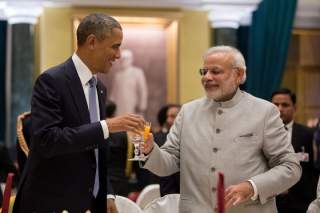 Although India’s economic story has been the subject of much discussion in the United States in the past decade, its foreign policy has not received similar attention. This has something to do with the consensus in Washington about India’s hesitancy in the exercise of realpolitik.

Last month, however, India’s newly appointed foreign secretary and leading strategist Subrahmanyam Jaishankar delivered an attention getter. In a major speech, Jaishankar emphasized that India was intent on playing the role of a “leading” instead a “balancing” power in Asia. This statement comes as a significant shift to the prevailing perceptions concerning India’s reluctance to actualize its role as a great power.

Until recently, India was seen as a power that could serve as a counterweight to China and help the United States in balancing China’s rise. However, Jaishankar’s statement suggests that India’s role could be far more strategic.

Post-independent India has always viewed itself as one of the world’s five major centers of civilization and a key manager of the global order. In fact, Indian Prime Minister Jawaharlal Nehru’s nonalignment policy during the Cold War was just such an attempt. It is another matter that nonalignment failed to live up to its promise due to the weaknesses of Indian power.

It is also a continuation of the more bold and assertive foreign policy line inaugurated by Atal Behari Vajpayee, Modi’s predecessor by a decade. Vajpayee literally implemented the “big bang” approach by formally claiming nuclear status for India and grabbing America’s strategic attention. Modi’s goals are more ambitious. He seeks to fulfill the promise of India’s potential.

For India to attain its potential, it needs a stable relationship with the world’s largest economies, mainly the United States and China. But all the Asian powers including the United States are increasingly troubled by China’s militarism and penchant for coercive diplomacy. Indian leaders, like their U.S. counterparts, share a common interest in ensuring that Beijing plays by the rules of the liberal institutional order the United States helped build in the post-World War II-era.

Although the United States and China are each other’s largest trading partners, they also compete with each other in the military and geopolitical realms. In the case of India and China, their relationship is marked by old border conflicts, competing desires to seek recognition at the global level, and sometimes shared economic interests. The Indian and Chinese economic relationship has burgeoned to nearly $70-80 billion annually and China is now poised to undertake major infrastructure investments in India.

In light of the complex economic interdependence between India and China, U.S. policymakers face a major challenge in assuaging concerns in New Delhi that the Obama administration’s “pivot” to Asia is something more than containment 2.0 and will not provoke a needless confrontation with Beijing.

Since India is committed to a policy of “strategic autonomy,” which is almost akin to the Jeffersonian doctrine of avoiding formal alliance entanglements, the best strategy for the United States to meet both challenges would be to adopt an indirect strategy of empowering India.

The United States could do this by providing India enhanced means to “command” the commons in the Indian Ocean region. By commons we mean the sea, air, space and cyber domains. America’s ability to dominate these spaces is the foundation of U.S. military power projection capabilities worldwide. By maintaining military superiority in each of these spheres, Washington is able to deter and defeat adversaries by restricting their ability to operate in any part of the world and in any of these domains.

There are three main areas where the United States could help itself by assisting India in improving its capabilities to dominate the commons in the Indian Ocean region. They are: carrier aviation, space surveillance, and cyber.

Carrier aviation is central to sea control where India already enjoys a leg up on the Chinese navy. Space surveillance is the key to controlling communications, surveillance, and navigation. It is increasingly critical to the revolution in military affairs. Finally, the United States could help India augment its cyber warfare capabilities to match Chinese advances in the last decade. Empowering India in augmenting its capabilities will add credence to America’s Asia rebalance strategy because as the world’s largest democracy, India is its natural ally based on common values and regional interests.

There is a growing recognition among policymakers and analysts that American primacy in the “command of commons” is being increasingly challenged by China. Finding key partners to address this concern should be one of Washington’s top priorities. Deepening cooperation between India and the United States in securing the commons will be a key step in not only shaping global security but also in taking the partnership with India to the next level.