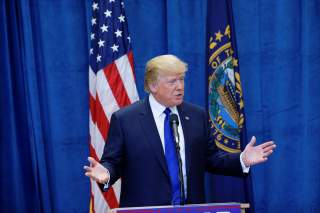 President Trump has signed a revised executive order temporarily suspending travel from certain terror-infested countries and pausing refugee resettlement. It has been modified to avoid being put on hold by judges, as the original was, and will go into effect on March 16.

The new version of the order changes several aspects of the original. Iraq has been removed from the list of countries whose citizens are barred for ninety days, leaving Iran, Sudan, Somalia, Syria, Yemen and Libya. The order explicitly exempts people from these countries who are green-card holders or who had a visa before January 27 (the date of the original order). Refugee resettlement is paused for 120 days, as in the original, but the indefinite pause in Syrian refugee admissions has been removed. (The reduction in FY 2017 admissions from Obama’s target of 110,000 to 50,000 remains in the revised order.) And the original order’s instruction to give preference in refugee admissions to persecuted religious minorities has been removed.

More important than the specifics of the two executive orders is the underlying principle. Congress has given the president blanket authority to prevent the entry of any foreign citizen; here’s the relevant statute, 8 U.S.C. § 1182 (f):

(f) Suspension of Entry or Imposition of Restrictions by President

The law doesn’t say “some aliens” or “certain classes of aliens approved by the judiciary” but “any aliens” or “any class of aliens.” As the attorney general said during the Monday press conference announcing the revised order, “This executive order, just as the first executive order, is a lawful and proper exercise of presidential authority.” It is telling that the highest court to rule on the original order, a panel of the Ninth Circuit Court of Appeals, did not even mention the statutory basis of the order, let alone explain why it thought the statute didn’t apply.

The Supreme Court has repeatedly upheld the plenary power of the political branches of government over immigration. As it ruled in one case, “Whatever the procedure authorized by Congress is, it is due process as far as an alien denied entry is concerned.” The Bill of Rights does not apply to foreigners abroad.

The advisability of such exclusions is a separate question; barring the admission of any foreigner who identifies as a Muslim would be bad policy. (The Oxford comma thing, on the other hand, is tempting.) But the proper forum for such a debate is the media and Congress, not the courts.

The underlying worldview of the challenges to the executive order was made clear by libertarian legal scholar Ilya Somin: “It is highly questionable whether the original meaning [of the Constitution] gives the federal government any general power to restrict immigration at all, much less one so sweeping that it overrides individual rights that restrict every other type of government action.” In other words, the people, through their elected representatives, may not restrict the arrival of foreigners, and if they try, the courts must stop them.

Since the judges who put the original order on hold were not ruling based on the law but rather on their policy preferences, this revised order will likely also be halted in court. It is important that the Trump administration fully litigate the issue and, if necessary, appeal the decisions to the Supreme Court, preferably after Neil Gorsuch is confirmed and seated. A precedent that judges may veto decisions by the elected branches of government on who is permitted to enter our territory would represent one of the greatest judicial power-grabs in American history. Control over who may enter a country is a fundamental attribute of sovereignty, and to the extent the people are stripped of that authority by unelected judges, the people are no longer sovereign. Self-government itself is at stake.

So, after all the fuss, will the revised order actually improve the nation’s security? Probably, a little. The ninety-day ban on entry from the six terrorism-afflicted countries is designed to give Homeland Security and other agencies some breathing room while they conduct a worldwide review of terrorist-screening procedures. The six countries listed have been the source of some, but certainly not most, of the foreign-born terrorists in the United States. But they represent the hardest cases for screening; they are either state sponsors of terror or have no functional government that can provide information needed for proper vetting (or both, in the case of Syria). The order also allows for the attorney general or the secretaries of state or homeland security to recommend other countries be added to the list.

The 120-day refugee pause, likewise, will be modestly helpful, giving the relevant agencies the space to develop and implement new screening procedures. Refugee resettlement is only one of many routes that bring terrorists to our shores, but the fact that there are other routes is no reason to neglect this one. The claims that prospective refugees are the most thoroughly vetted foreigners allowed to come here are less persuasive when you consider that they, almost by definition, come from countries where the information needed for security vetting is nonexistent.

Perhaps more important, in the long run, than either of these temporary pauses is a provision that was not challenged. The president instructs the DHS secretary to expedite the development and implementation of a biometric entry-exit tracking system for foreign visitors. Since 9/11, our system for checking foreign visitors in when they arrive has improved, but we do a poor job at checking them out. And if you don’t know who has left, you can’t know which visitors remained illegally after their time expired. This matters for both security reasons and for general immigration enforcement because the majority of roughly one thousand illegal aliens who move here each day are visa overstayers, not border jumpers.

The new executive order doesn’t establish a new framework for immigration security; its main effect is merely to slow some of the flow for a few months to allow the development of such a framework. As such, the melodrama surrounding it may be hard to explain. But when you understand that it’s the president’s very authority to keep foreigners out of the country that’s being opposed, the melodrama makes more sense.

Mark Krikorian is executive director of the Center for Immigration Studies.