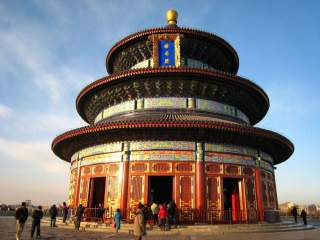 THE THOUSANDS of terra-cotta warriors from the third-century-BC Qin Dynasty, first unearthed in the mid-1970s, constitute one of the wonders of the world. I stared down into the vast clay pit where these life-sized soldiers, no two of them exactly alike, stand in a state of freeze-frame marching. They are all headed east. For Qin, though in the heart of today’s China, had been the westernmost of the Warring States. Thus, to the east lay all of Qin’s enemies. Beyond Qin, in the opposite direction westward, the agricultural cradle that has always defined Chinese civilization begins to give way to the emptier deserts of Central Asia.

A short drive from the site of the terra-cotta warriors in Shaanxi Province brought me to the Great Mosque of Xian, an eclectic confection of Arabic script underneath a traditional, upturned Chinese roof decorated with peacock-blue Persian tiles. The minaret here is easily mistaken for a pagoda. The result makes for an exquisite aesthetic, mixing the Middle East and the Far East, made even more precious by the dust. The Han-related Hui people, who maintain this mosque, account for the easternmost tentacle of Islam on the main body of the Asian mainland: the medieval Silk Road begins and ends right here—in what is, to repeat, the heart of the current Chinese state. For China’s political borders now encompass much more than the agricultural core of historic Han China.

Next up was Dunhuang, almost nine hundred miles to the northwest of Xian. Twenty minutes after takeoff, the intricate checkerwork of cereal cultivation began to thin out—a rumor of what would soon become a bleached and bony wasteland, the mountaintops like protruding vertebrae. Politically I was still deep inside China; demographically and ethnically less so, though geographically I had already crossed into Central Asia—into the southwest corner of the Gobi Desert, to be precise. By the time the plane landed the terrain had been reduced to a sheet of sandpaper, almost absent of topographical features.

Dunhuang was founded in middle antiquity as a military outpost of Han China, in the drive to establish and maintain protectorates in the desert and steppe lands to the west of the agricultural cradle. Buddhism, which took root during this period in what is now Pakistan’s northwest frontier, would become central to the Silk Road as the belief system of merchants and traders. There are hundreds of caves, their walls covered in medieval Buddhist frescoes, in the friable cliffsides around Dunhuang. In their lace-like delicacy, the tea-rose and mint-green colors of these frescoes seemed washed by milk. The paintings bear the artistic influences of not only Tang China but also Tibet, India and Sassanian Iran. For Dunhuang was a Silk Road nexus.

Just an hour beyond Dunhuang, hard lava-red hills suddenly give way to a horrifying ashy emptiness. This is the Yangguan Pass, where the protection of imperial China officially came to a halt. I thought of what the eighth-century Tang poet Wang Wei wrote of this very place:

Let us empty another cup of wine.

For, once West of Yangguan Pass, there will be no more friends.

But now I do continue west, yet once again, still well within the borders of the twenty-first-century Chinese state.

In Urumqi, beyond stacks of half-finished apartment blocks, I saw the towering, snow-mantled curtain of the Tien Shan (“Mountains of Heaven”) emanating terror and death. I shivered just looking at these gelid mountains. Twenty-one years before, on a previous visit, I found Urumqi a somnolent city of under a million when I arrived on a ramshackle train from Kazakhstan and left on a ramshackle bus for the Chinese border with Kyrgyzstan. No longer. Today Urumqi, the capital of China’s westernmost Xinjiang Province, has a population of 3.8 million. It is bursting with traffic jams on webworks of new highways and overpasses, with gleaming skyscrapers all around. The city is a testimony to Beijing’s attempt to dominate its Central Asian minority areas by smothering them with development, even as the Chinese build urban nodes for a postmodern Silk Road of long-distance highways, railways and energy pipelines linking China with the former Soviet republics nearby. For it isn’t only the Tien Shan that manifests the reality of Central Asia deep inside China: it is also the signs in Arabic script, evidence of the Turkic Uighur language spoken by more than a third of Urumqi’s inhabitants, a language strikingly similar to Turkish proper. (There are, too, signs in the Russian alphabet, indicating the presence of Kazakh, Uzbek and other Muslim minorities.) When one adds these ethnic Turkic areas to Tibet, you have a third of China’s land area. China is a prison house of nations, albeit to a lesser extent than the former Soviet Union.

And yet, whether it is the new highways, the high-speed rail trains that swept by my bus here in Chinese Central Asia, the unending new wind farms on the steppe or the ceaseless new apartment blocks—or even the very number of terra-cotta warriors themselves—China has always manifested an ambition of jaw-dropping, epic proportions. The sheer scale of it is impressive and frightening, both in antiquity and now. The fissiparous possibilities of China’s geography and ethnic makeup appear more than matched by the unifying force of this ambition.

My journey ends in Kashgar, adjacent to the borders of Kyrgyzstan, Afghanistan, Tajikistan and Pakistan. Eighty percent of the Kashgar region’s population of 4.5 million are Muslim Uighur Turks. The signature event here is the Sunday livestock market, where throngs of Uighur men in wispy beards and flat brocaded caps furiously bargain amid packed masses of sheep, lambs, horses, donkeys, cattle and furry Bactrian camels. The entire scene is veiled by a greasy film of dust, so that your memory of it is in black-and-white rather than color. But as authentic as it might appear to a first-time visitor, the livestock market in 2015 actually represents a more regulated, sanitized version of what I had experienced in 1994. Then, instead of Chinese-built trucks bringing the animals to market, there had been a chaos of donkey carts; and instead of a vast, rectangular space outside town set aside for the weekly event as exists now, the livestock market in the 1990s had been integrated into the bustling, equally chaotic traditional bazaar of Kashgar, with animals jostling against muddy stalls of brass and copper ware, all making for a deafening panorama of visual splendor reminiscent of earlier centuries.

But over twenty-one years, the ability of the Chinese state to extend its reach into the minority desert hinterlands has advanced so much that Kashgar today is a place of new, regimented apartment blocks, with paved streets and a grid pattern, while the animals are kept far from town. It is modernism, deliberately imposed by the Chinese authorities, that is diluting Turkic Uighur culture here. Kashgar is becoming a city of light industry—plastics and electronics—with the workers often imported from the Han core far to the east and housed in these new apartment blocks. The Uighur population fights back by copying mass culture imported from Turkey—the music and dances in the upscale Uighur restaurants are sometimes right out of Turkish television.

Whereas the medieval Great Mosque of Xian exudes an elegant confluence of civilizations—Chinese, Arab and Persian—here, deeper along the Silk Road in the twenty-first century, there is evidence of a crude clash. One day I witnessed hundreds of Uighur men with their beards and embroidered hats emerge from the fifteenth-century Id Kah Mosque in the center of Kashgar, only to face a well-organized group of Chinese who were engaged in loud line dancing to music from the movie Rush Hour. Their festivities were timed to coincide with afternoon Muslim prayers. Thus was mass global culture employed as an affront to a very traditional one.

MY ENTIRE trip constituted evidence of a postmodern geopolitical drama. The late Harvard China scholar John King Fairbank once said that China’s sense of itself is based on the cultural difference that exists between this surrounding belt of desert and the sown of China proper—in other words, between the pastoral and the arable. China’s ethnic geography reflects, in the words of Fairbanks and his Boston University colleague Merle Goldman, this “core-periphery” dynamic, with the core being the arable central plain of inner Han China, and the periphery being these pastoral frontier uplands heavily populated by minorities. To the early Chinese, agriculture meant civilization itself: that is, the Middle Kingdom, Zhongguo, which owed nothing to these surrounding peoples of the desert and steppe. From this worldview followed the kind of cultural certainty that China shared with Western Christendom.

The fact that the Chinese state today includes both desert and sown reflects the culmination of a long and thus far triumphant historical process, which, in turn, provides the geographical basis for Chinese power. Indeed, the reason why China is now developing a great naval presence in the South and East China Seas is because China, finally, in modern times, has the ability to do so, a luxury afforded by its erstwhile conquest of the desert and steppe-land periphery going counterclockwise from Manchuria to Inner Mongolia to Xinjiang to Tibet, thus protecting the arable cradle of Han culture from hostile incursions. Secure and dominant on land, Beijing can now go to sea.