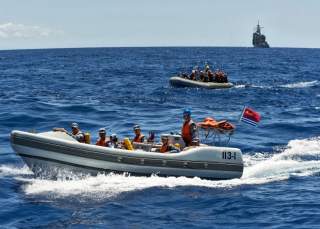 The Arbitration Tribunal at the Hague regarding the UN Convention on the Law of the Sea (UNCLOS) has just made a big splash with its landmark ruling in PCA Case No. 2013-19—the South China Sea Arbitration (The Republic of the Philippines v. The People’s Republic of China).

“The Philippines welcomes the issuance today . . . on the arbitration proceedings initiated by the Philippines with regard to the South China Sea,” Foreign Affairs Secretary Perfecto Yasay rightly told the press this morning.

His welcoming is rippling across the Asia-Pacific and around the world: this is a great victory for Manila, Washington and all other parties committed to international law—and for the peaceful, open global system that they rightly support.

The Tribunal’s full-length “award” document is a five-hundred-page doorstop, readily digestible by only the most determined of legal experts. Many will be struck by the fact that the Tribunal found Beijing to have violated no fewer than fourteen UNCLOS provisions, six International Regulations for Preventing Collisions at Sea (COLREGS) rules and one general rule of international law.

Here are the related principal findings:

• Key wording: “The Tribunal concluded that there was no legal basis for China to claim historic rights to resources within the sea areas falling within the ‘nine-dash line.’”

• Significance: Of critical legal importance, (in applying the 121(3) rule concerning islands and rocks) the tribunal has ruled that the largest feature, Taiwan-occupied and China-claimed Itu Aba, is a “rock” and hence not entitled to an EEZ or continental shelf. There are therefore no maritime boundary delimitation issues to deal with here, scuttling China’s vehement protests that there are. In fact, there is not much question about boundaries at all, only baseline issues for low-tide elevations (LTEs) within territorial seas of some features.

• Key wording: “Having found that certain areas are within the exclusive economic zone of the Philippines, the Tribunal found that China had violated the Philippines’ sovereign rights in its exclusive economic zone by (a) interfering with Philippine fishing and petroleum exploration, (b) constructing artificial islands and (c) failing to prevent Chinese fishermen from fishing in the zone. The Tribunal also held that fishermen from the Philippines (like those from China) had traditional fishing rights at Scarborough Shoal and that China had interfered with these rights in restricting access. The Tribunal further held that Chinese law enforcement vessels had unlawfully created a serious risk of collision when they physically obstructed Philippine vessels.”

• Significance: All countries have their own sovereign rights, and China must honor its constant claims not to interfere with them.

• Key wording: “The Tribunal . . . found that China had caused severe harm to the coral reef environment and violated its obligation to preserve and protect fragile ecosystems and the habitat of depleted, threatened, or endangered species. The Tribunal also found that Chinese authorities were aware that Chinese fishermen have harvested endangered sea turtles, coral, and giant clams on a substantial scale in the South China Sea (using methods that inflict severe damage on the coral reef environment) and had not fulfilled their obligations to stop such activities.”

• Significance: Perhaps China’s well-documented devastation of reefs and other fragile natural treasures will finally galvanize foreign environmental organizations, which have long been strangely silent on this subject, to speak out.

5. China’s industrial-scale land reclamation and feature augmentation violates obligations during dispute resolution proceedings and does not confer any additional maritime legal rights to the features themselves.

• Key wording: “The Tribunal found . . . that China’s recent large-scale land reclamation and construction of artificial islands was incompatible with the obligations on a State during dispute resolution proceedings, insofar as China has inflicted irreparable harm to the marine environment, built a large artificial island in the Philippines’ exclusive economic zone, and destroyed evidence of the natural condition of features in the South China Sea that formed part of the Parties’ dispute.”

China doesn’t have to like the Tribunal’s ruling, but—having ratified UNCLOS—it is legally bound to respect it in practice.

Any failure to do so will tarnish Beijing’s reputation badly and sharply increase the already-growing costs it faces in the court of public opinion. It will do so by stoking broader fears that as it becomes increasingly powerful China will:

• Implicitly or explicitly threaten the use of force to resolve disputes

• Attempt to change precipitously—or else run roughshod over—important international norms that preserve peace across Asia and underwrite the global system on which mutual prosperity depends.

Rep. J. Randy Forbes, chairman of the House Armed Services Seapower and Projection Forces Subcommittee and cochairman of the Congressional China Caucus, summed this up cogently in a press release this morning:

“Today is China’s moment to show, once and for all, the reality of its claim to be a ‘responsible stakeholder’ in the international community. Failure to fully respect the ruling of the arbitration panel would not only expose China’s belief in a ‘might makes right’ philosophy for all the world to see—it would also profoundly fray the post-1945 international order that Beijing has been chipping away at for nearly a decade. The United States must stand steadfastly on the side of international law and the peaceful resolution of disputes, and hold China to account for its behavior following this ruling.”

Meanwhile, all parties concerned must remain vigilant prevent China from destabilizing a vital yet vulnerable region that remains haunted by history and, worse still, grabbing with coercion or force what it could not—and now clearly cannot—obtain legally.

In particular, the United States and its regional partners need to be prepared for China to utilize a tailored tool that all too few people understand, or even recognize.

For years now, China has been surreptitiously pushing territorial claims against weaker neighbors using its Maritime Militia or “Little Blue Men,” roughly equivalent at sea to Putin’s “Little Green Men” on land. This Maritime Militia, the world’s largest, is China’s Third Sea Force, after the world’s second-largest blue-water navy and largest blue-water coast guard. The “Chinese fishermen” and fishing vessels under military-control within this irregular sea force include precisely the ones that China has used to interfere with Philippine fishermen’s “traditional fishing rights,” including “at Scarborough Shoal”—violations that the tribunal has roundly and soundly condemned.

Now the Third Sea Force offers a tempting tool for Beijing to disrupt U.S. Freedom of Navigation Operations in the South China Sea, which Beijing bitterly opposes for emboldening its neighbors. It can also be used to punish the Philippines for initiating the legal case, and to deter any other neighbors (like Vietnam) which might consider follow-on submissions.

China’s Third Sea Force has already played a key role in a wide range of Chinese incidents and skirmishes with foreign maritime forces throughout the South China Sea. These include China’s:

1. 1974 seizure of the western portion of the Paracel Islands from Vietnam

4. 2012 seizure of Scarborough Shoal from the Philippines

Yet, China’s Maritime Militia has not yet been mentioned in any public U.S. reports or in any public statements by Washington-based U.S. officials. In particular, the utter failure of the Pentagon’s 2016 China report to mention the Maritime Militia in any way whatsoever was a major missed opportunity. If the U.S. government (with all its resources and capabilities) has not yet begun to address this challenge openly and proactively, how can it expect its Asian partners to do so? And how can it expect Beijing to be deterred from using its Third Sea Force in new, nonlegal ways?

As storm clouds gather over the South China Sea, strong, effective U.S. leadership is needed to address China’s Third Sea Force and its possible use in forthcoming Chinese nonlegal activities to further its outstanding sovereignty claims. To that end—as part of a much broader set of communications, preparations and activities including engagement in robust Freedom of Navigation operations soon to support key aspects of the tribunal’s ruling— here’s what the United States needs to do.

1. China’s Maritime Militia is a military force—often in disguise.

2. China’s Maritime Militia forces do not deserve civilian protections in the event of conflict.

3. Uncovering the truth about China’s Maritime Militia is the best way to deter it.

And engage in four actions:

1. “Call out” China’s Maritime Militia in public and in conversations with PRC interlocutors.

3. Make it clear that any elements that ignore repeated warnings by U.S. vessels to desist from disruptive activities will be treated as military-controlled and dealt with accordingly to ensure self-defense and unobstructed mission accomplishment.

4. Impose consequences for any use of Maritime Militia against U.S. vessels.

By engaging in proactive measures to deter Beijing from using its Third Sea Force in ways prohibited by international maritime law, Washington can help ensure that the rules-based order that the UN Tribunal just upheld remains resilient in practice. The award for doing so effectively will be priceless: an open, prosperous South China Sea that all are welcome to use legally without favor or fear.