Triple Threat: America, China and Russia on the Path to Conflict? 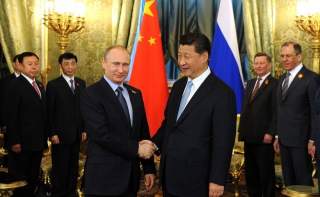 The United Nations is intended to be the world’s hub for cooperation and conflict resolution based on diplomacy and international law. So it’s a good thing when world leaders gather for the annual debate of the UN General Assembly and engage in direct, substantive discussions on the global and regional challenges that matter most. Unfortunately, the message this year from the three biggest powers—the United States, Russia, and China—was that dialogue and diplomacy have failed to keep up with an emerging new confrontational spirit.

The showdown between Presidents Obama and Putin was widely anticipated before the two leaders made their appearances on the dais in New York, barely more than an hour apart. In fact, the White House and the Kremlin had already agreed to stage a brief summit meeting between the presidents on the sidelines of the General Assembly to address the rapidly deteriorating crisis in Syria. Yet it is now clear that no amount of advance preparation and even substantial direct contact between the two presidents was sufficient to prevent the war of words from signaling what many are already calling the onset of a new Cold War.

Whatever one chooses to label this confrontation, it is rising to a level where it cannot simply be dismissed, diminished, or explained away by those who imagine that the world has somehow graduated from the era of geopolitical rivalries among great powers to a more enlightened, liberal order. Quite the contrary. The current conflict could prove to be as dangerous as the U.S.-Soviet confrontation that shaped the last century, and it will undoubtedly be far more complex. That is above all because of the massively increased power and yet still ambiguous intentions of a third key actor: China.

Taking the podium ahead of his Russian and Chinese counterparts, President Obama spoke of American power and leadership founded on values which he insists are universally shared. The United States, he argued, is the wealthiest and most powerful country on Earth precisely because of its commitment to human freedom and basic human rights. For other nations to enjoy a better life, they must first of all embrace and practice these values, rejecting any narrative that justifies limits on human rights in the name of cultural or civilizational identity.

It was no surprise that President Putin responded with a sharp critique of what he called America’s abuse of power. Putin slammed not only Americans’ penchant for preaching to others about the superiority of their values, but railed against the destruction wrought by U.S. violations of the very international rules it purports to defend. According to Putin, reckless U.S. interventions in the name of removing and replacing foreign governments have destroyed societies, brought untold suffering, and most recently unleashed the threat of ISIS, which in turn triggered the global refugee crisis.

What is perhaps more troubling than the obvious clash between the U.S. and Russian leaders—underscored by the entanglement of both sides’ military forces in Syria—is the apparent indifference and ambiguity of the response from China, the third vital great power in the new global strategic triangle.

Rather than endorse or reject the strong statements from Putin and Obama, President Xi simply repeated platitudes about the importance of basic international rules, and how China’s rise will entail harmonious cooperation with other states, large and small. Xi offers such cold comfort to a distressed international community at the same time that he has proposed what is effectively a U.S.-China condominium, which he calls “a new model for big power relations,” and has put forward a concept for Chinese-led economic integration from Europe to East Asia, dubbed “One Belt One Road.” Thus, while China assures the world that it will play by the rules, and does not seek any sphere of influence or territorial aggrandizement, it is busily expanding its own economic footprint globally and apparently developing geopolitical ambitions to match.

History suggests there are three basic paths forward for the current configuration of great power relations and global challenges. The U.S., China and Russia could find some degree of mutual accommodation in their shared interests in preserving free global trade, travel, and cooperation against global threats such as terrorism, climate change, and pandemic disease. Alternatively, the barriers of distrust could remain so high among all three that each pursues its national interests and purported values in isolation from the others, deepening the current global disorder and likely exacerbating a host of regional and global crises.

Finally, the “New Cold War” Cassandras could turn out to be right. However, the defining geopolitical rivalry of the 21st century will inevitably engage not only Washington and Moscow, but Beijing as well. Judging by the three leaders’ disjointed UN discourse, some combination of global disorder and new dividing lines seems most likely, at least until mounting challenges and crises force these juggernauts to seek a more cooperative path.

Matthew Rojansky is Director of the Kennan Institute at the Wilson Center in Washington DC.