Troubled Waters: Will a Strong Dollar Torpedo the Global Economy? 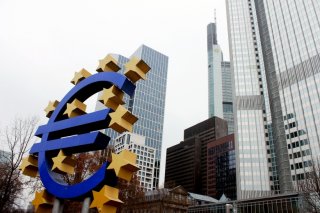 The Plaza Accord was a truly coordinated effort by the G5 economic powers to spur economic growth. Finance ministers met, agreed on a course of action, and executed it. Although the goal was explicit, it was also vague—to devalue the dollar. Now, central banks are coordinating their policy decisions again. But instead of summits and meetings between finance ministers, central banks have a new method to conduct their policy coordination—transparency. Policy transparency from the Federal Reserve allows other central banks to anticipate their actions—and respond accordingly. This is the Yellen Accord—and it may just save Europe.

The Yellen Accord is a much subtler construct, but it appears to be at least as successful as its predecessor. This time, to spur economic growth, the major Central Banks are forcing a revaluation of the Dollar—whether the Fed likes it or not. The consequences, both near and far, should not be discounted. The long-term depreciation of the dollar has ended. And this decision is not being made by the Federal Reserve or the Treasury.

The Eurozone economy needs to avoid a triple dip recession, and the U.S. economy has pulled itself out of a recession. By tightening monetary policy ever so slightly—eliminating bond purchases (QE) and intimating that there will be interest-rate increases (though not immediately or quickly), Chair Yellen is doing precisely what should be done by a relatively strong economy. The European Central Bank (ECB) is taking a reasonable course of action as well by launching a bond-buying program.

By explicitly stating their policy intentions and direction, the Fed tacitly allows the ECB and the Bank of Japan (BoJ) to time their decisions optimally around the Fed’s and achieve their mandates.

The Eurozone needs this type of intervention, but the United States also needs to be able to survive it. A dramatically weaker euro and stronger dollar could cause problems for the U.S. economy down the road. Without the Fed’s relative policy tightness, Draghi’s stimulus program would not have been as successful at weakening the euro. The Fed and U.S. monetary policy are part of the current ECB stimulus package. A deviation from the current path of tightening by the Fed threatens to knock the Draghi stimulus—and therefore a European recovery—off-course.

On its own, the ECB probably does not have the policy firepower it needs to spark the desired outcome in the Eurozone. Luckily for the ECB, the Yellen Accord transparency provides opportunities to achieve outcomes that would not be possible for Central Banks without it. The alteration of the global central banking toward transparency has fundamentally changed the policy options available to central banks. Fed policy may not aim to accomplish objectives beyond its border, but it is certainly facilitating them.

Yellen and the Fed essentially allowed for the euro and yen to rebalance in a similar fashion to previously coordinated efforts. To a degree, forward guidance and transparency are simpler methods of coordinating policy actions between central banks—for better or worse. The necessity of credibility makes it far more difficult for a central bank to break from a stated path. When the Fed has guided markets toward a certain policy stance or outcome, any surprise deviations damage the credibility of the institution. And lack of credibility is something to be feared by a monetary authority.

Policy coordination is largely mechanical in nature—selling or buying currencies and raising or lowering interest rates. But transparency of policy movements and changes eliminates the need to overtly coordinate and articulate. Transparency removes the pain point of coordination, but it could also lead to cheating and “overshooting”—such as what happened in India in 1995. In other words, piggybacking on the Fed’s policy shift works until someone begins to take advantage of the situation beyond the reasonable. (This is why—in the era of transparency—it is all the more crucial to keep the central bank separate from the central government.)

This policy is unlikely to produce all benefits and no costs. The Plaza Accord was not beneficial to all parties involved, and took a considerable toll on some. The mission of devaluing the U.S. dollar was successful, but the Plaza Accord was painful for the yen and the Japanese economy. The yen rose dramatically as the Accord was implemented, prompting stimulus measures to offset the appreciation, which fostered an asset bubble, which burst, necessitating a decade of recovery.

Now the Yellen Accord is taking its toll on the dollar. The revaluation appears to have been orderly thus far, but there may still be pain to come, as the world economy grapples with something it has not seen in a long time—a strong and strengthening dollar.

Coordinating policy had been out of vogue for a quarter century. But central banks have quietly brought it back. The Fed and its global counterparts have entered a new era of central banking. One in which a loose form of policy coordination is the new normal and the ability of central banks to address—as well as cause—economic problems is amplified.

For now, it means the BoJ and ECB are magnifying the movements of the Fed. This may be the reason Yellen took a step back from full forward guidance at the latest Fed meeting, and retreated to the familiar territory of data dependency—a subtle warning to be careful with the dollar. She is well aware of the risks of this policy; someone could take the Yellen Accord for granted and (over)shoot the global economy in the foot.