A True Afghanistan Counterinsurgency Is Trump's Only Hope 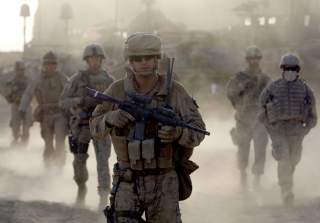 Last night, Donald Trump became the third consecutive U.S. president to commit to a counterinsurgency strategy in Afghanistan. He did not do so willingly; indeed, like President George W. Bush, Donald Trump had campaigned explicitly on the idea of abandoning nation-building campaigns like those conducted by his predecessor. But there are only three options when your enemy chooses to fight you as an insurgent: quit, conduct a scorched-earth campaign that kills everyone and destroys everything, or commit to counterinsurgency.

We cannot afford to quit. In the best two lines of his speech, President Trump laid out U.S. interests in Afghanistan and Pakistan as well as is possible: “We must stop the resurgence of safe havens that enable terrorists to threaten America. And we must prevent nuclear weapons and materials from coming into the hands of terrorists and being used against us or anywhere in the world.”

Leaving Afghanistan would quickly result in the fall of Kabul to the Taliban, and the resumption of a safe haven for terror in Afghanistan, which cost us dearly on September 11, 2001. The United States cannot follow the Roman method of making a desert and calling it peace in Afghanistan and Pakistan. And so Trump, like Bush and Obama before him, chose a counterinsurgency strategy, not as his first choice, but as the least bad option available.

Counterinsurgency is a political, diplomatic, economic, military and informational effort to defeat an insurgency like the one conducted by the Taliban, with Pakistani support, against the Afghan government. It is, as a U.S. Special Forces officer fighting in Iraq told me more than a decade ago, “the graduate level of war,” far more difficult than conventional tank wars like the one he and I fought in Iraq in 1991, during Operation Desert Storm. In conventional war, diplomacy and politics take a bit of a breather, while the military destroys an easily identifiable uniformed enemy on a field of battle, and progress is measured by territory won or lost. These wars take months or years.

In a counterinsurgency campaign, one goal is to kill or capture terrorists, as the president proclaimed. But the primary objective is to build a local government that earns the support of its people by meeting their needs. The first purpose of a government is to take care of its people, so earning the support of the locals demands an Afghan army and police forces that can protect the Afghan people against the Taliban. The most visible sign of President Trump’s counterinsurgency strategy in Afghanistan will be the several thousand combat advisers that Secretary of Defense James Mattis will commit there over the next several months.

This strategy has been tried before, and it will work given enough strategic patience and sufficient resources. America’s exceptionally talented and committed all-volunteer force makes possible an open-ended commitment to this strategy, and President Trump avoided repeating President Obama’s mistake of telegraphing a time-limited American commitment to counterinsurgency. The sixteen-year war in Afghanistan, America’s longest, may only be half over—if we’re lucky. These wars take decades to win.

However, military forces are only part of the resources necessary to conduct a successful counterinsurgency campaign. When fighting Al Qaeda in Iraq (AQI) in Anbar Province in 2004, I was hobbled by a lack of diplomatic expertise; we soldiers conducted diplomacy because there were not enough State Department officers to go around. The situation is far worse today. President Trump’s budget cuts the State Department by more than 30 percent, and seven months into his administration, we have no assistant secretary of state for Political-Military Affairs and no Trump-appointed ambassadors to Afghanistan or Pakistan. In 2013, when Secretary of Defense Mattis was still wearing the uniform of a Marine general, he told members of Congress, “If you don’t fund the State Department fully, then I need to buy more ammunition.” Mattis is now a key member of an administration that is gutting our State Department at a time when it is sending more soldiers and marines in harm’s way. More of them will come home draped in American flags than necessary, because they lack the diplomatic and political support they will need to build a stronger Afghan government and military.

Finally, President Trump claims that he “studied Afghanistan in great detail and from every conceivable angle.” This is, of course, untrue; one of the easily conceivable angles from which he could have studied Afghanistan is from the ground, in Kabul and on the country’s mountainous border with Pakistan. I urge him to go to Afghanistan immediately—this week—to meet with his commanders and diplomats in Afghanistan and Pakistan. He will find brave Americans committed to his strategy, and determined to keep Americans safe, by conducting counterinsurgency in Afghanistan under the third president to order them to do so.

John A. Nagl is the ninth headmaster of the Haverford School outside Philadelphia. A retired Army officer who fought in both wars in Iraq, he helped write The U.S. Army/Marine Corps Counterinsurgency Field Manual and is the author of Learning to Eat Soup with a Knife: Counterinsurgency Lessons from Malaya and Vietnam.