Trump’s Battle Over the Wall is Intensifying 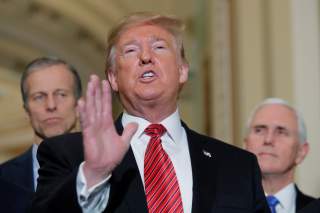 “My administration has presented Congress with a detailed proposal to secure the border, and stop the criminal gangs, drug smugglers, and human traffickers. It’s a tremendous problem,” said President Donald Trump as he spoke to the nation last night, his first address from the Oval Office. After meeting with Republican legislators on Capitol Hill today, Trump said the GOP is “totally unified.” Senate Majority Leader Mitch McConnell stated, “We’re all behind the president.”

This afternoon a meeting between Trump and congressional leaders collapsed after Democrats continued to rebuff his demands for funds for a wall. Trump tweeted, “I asked what is going to happen in 30 days if I quickly open things up, are you going to approve Border Security which includes a Wall or Steel Barrier? Nancy said, NO. I said bye-bye, nothing else works!”

The current shutdown of the federal government has lasted eighteen full days and is likely to become the longest shutdown in U.S. history (surpassing the twenty-one-day shutdown of 1995-1996). The shutdown has occurred due to an inability of the administration and Congress to agree on funding for President Trump’s border wall.

A fixture of his presidential campaign and in rallies since then, Trump’s promise of a “big beautiful wall” on the southern border to combat illegal alien crossings has drawn distinct lines through the capital. Hardline Republicans see the wall as non-negotiable, while the wall has become the bête noire of Democratic politicians.

On the advice of Republican congressional leaders, President Trump demurred on wall funding for his first two years in favor of more traditional Republican planks such as tax reform. But after the November midterms and the Democratic capture of the House, the administration has double-downed on a last-ditch effort to receive allocations for some kind of physical barrier before it becomes a dead-letter in front of a Democratic majority.

However, he may not be able to speak for them for much longer. As the shutdown continues on, there are increasing cracks in the Senate GOP dam.

In a statement to TNI, Senator Lisa Murkowski of Alaska said the government shutdown should end, even without funding for a border wall:

“I continue to stress that there is no good reason for a shutdown. The reality is thousands of furloughed federal employees and contractors have no paycheck in sight, small businesses and local economies that rely on them are suffering, and there is no reason they should be held hostage to a political dispute. It’s important that we continue the debate on how we address border security and address the President’s top priorities, but it’s possible to provide for security and to address the humanitarian crisis on our border, while still doing our jobs to keep the government fully functional. We as appropriators have done good work on the funding bills not yet enacted, and so I will be actively working with the Majority Leader to finding a solution to fund the government and end this partial government shutdown.”

Murkowski is not the only Republican dissenter. In an interview with Meet the Press on January 6, Senator Susan Collins of Maine enunciated the same position. “I’ve never thought that shutdowns are an appropriate means of trying to achieve any kind of solution,” she said. The senator continued, “Well I've always thought that the debate over what the physical barriers should be constructed of was rather bizarre. We do need to strengthen our border security…we need to look at more than just the physical barrier. We need to look at more border patrol agents, technology, and other means as well.”

While Senators Murkowski and Collins believe that debates over border security and what physical form it’ll take can be deferred, it’s unlikely to take place during this next term in a divided Congress.

In an op-ed for The Hill, Senator Thom Tillis of North Carolina has continued to seek a compromise on immigration. His plan as envisioned would see increased funding for border security and amnesty for DACA recipients. But he makes it clear that he’s not prepared to stand for a “wall” as promised by the president: “When it comes to securing our borders, it’s important to note that the real solution is not going to be a big, literal physical wall, but rather an all-the-above, all-hands-on deck approach: more funding for personnel, more funding for technology and more funding for infrastructure, including physical barriers and steel fences.”

Sens. Joni Ernst, Cory Gardner and Shelley Moore Capito are also starting to air grievances about the duration of the shutdown. All are all up for re-election in 2020. Wherever they stand on the wall or on the shutdown, the most pressing question is whether they would be willing to vote with the Democratic Senate minority and against President Trump. For now, the battle over the wall isn’t going away but intensifying.