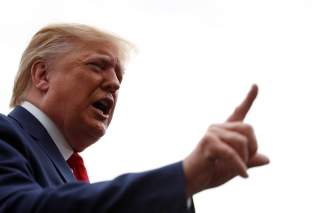 At the White House on Friday, President Donald Trump declared that Democrats are “trying to make us look as bad as possible.” He’s right. But it isn’t Democrats who are his principal problem. It’s whether Republicans will continue to stand behind him or defect.

There are several troubling developments for Trump on this front. Sen. Lindsey Graham has introduced a resolution that demands more transparency in the House impeachment inquiry. Trump wants the resolution as a public sign that Republicans have his back. But the resolution may be proving the reverse. Graham had to soften the language of the resolution from condemning the House’s actions to pleading for transparency to attract fifty co-sponsors.

Another difficulty that Trump confronts is that he is increasingly unable to command loyalty from within his administration. The forthcoming publication of a tell-all book by Anonymous, who is apparently a senior official in the administration, is indicative of Trump’s difficulties in identifying and hiring officials who are not only conversant with his views, but also share them. Trump himself offered a kind of confession in this regard when he stated at the White House on Friday, “Here's the thing. I don't have teams; everyone's talking about teams. I'm the team. I did nothing wrong."

But he does have a team. One member of it, Tim Morrison, a senior staffer on the National Security Council, is preparing to ignore the White House’s directive against cooperating with the inquiry. He seems intent on testifying and may well corroborate William B. Taylor Jr.’s statements. According to Politico, Morrison “would be the first currently serving White House official to testify. He’s also the first official believed to be on a July 25 phone call between President Donald Trump and Ukrainian President Volodymyr Zelensky during which Trump pressed his counterpart to investigate former vice president Joe Biden.”

Then there are the former officials who have targeted Trump. As Matthew Walther noted in The Week, “the truth is that Trump's most dangerous enemies today are not anonymous career officials but the people he has fired or forced to resign.” Trump’s former top Russia adviser Fiona Hill kicked off the testimony on the Hill about Trump’s Ukraine machinations. But her testimony would pale in significance next to Trump’s former national security adviser John Bolton, who is clearly seeking to avenge his ouster in September.  Bolton is in talks with House Committee officials about testifying to the impeachment inquiry. Bolton’s testimony could be deeply injurious to Trump, not only for what he says but also for the fact that he cannot be plausibly painted as either a left-wing radical or a member of the deep state, as White House Press Secretary Stephanie Grisham depicted Taylor. “He’s as big a hawk as you’re going to find,” House Intelligence Committee member Peter Welch (D-VT) has noted. “And according to the news report, he was shocked and appalled at the run-around of the official channels for a private foreign policy run by Giuliani. So that makes what he has to say of interest to me.”

One Republican who is demonstrating his fealty to Trump is Attorney General William P. Barr. Barr struck out in trying to obtain damaging information on American intelligence agencies from the Italian government, but he has promoted the investigation led by U.S. Attorney John Durham of the FBI and CIA into a criminal one. Democrats are alleging that Trump and Barr are engaging in their own witch-hunt. Reps. Jerrold Nadler and Adam Schiff averred, “If the Department of Justice may be used as a tool of political retribution, or to help the President with a political narrative for the next election, the rule of law will suffer new and irreparable damage.” But Trump champions are hoping that the investigation will indeed unearth evidence of a nefarious attempt to blacken Trump’s name and sabotage his candidacy for the presidency in 2016 by leading intelligence officials, including James Comey who headed the FBI until Trump fired him on May 9, 2017. Then there is Inspector General Michael Horowitz's Foreign Intelligence Surveillance report, which he told Congress is "nearing completion."

But even as Barr moves forward, congressional Democrats are rapidly upping the pressure on Trump. Friday saw House committees issue subpoenas to State Department official T. Ulrich Brechbuhl and Office and Management and Budget officials Russell Vought and Michael Duffey. At the same time, Rudy Giuliani’s troubles continue to mount as the Justice Department expands its investigation of him and his two business associates, who paid him $500,000 last year for work he performed on behalf of a company called Fraud Guarantee. On Friday, Trump stood by Giuliani, declaring, “he’s been a great crime fighter.”