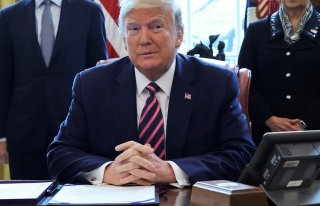 A global power with global interests and responsibilities, the United States now finds itself battling a global pandemic, in the midst of great power competition. That’s a big agenda.

Today, Americans obsess on one key issue–how and when to get America open for business. Still, now that the curving is bending, Washington’s attention will soon turn to our role as a global leader–if only because rebooting the U.S. economy depends, in part, on jumpstarting and revitalizing trade, investment, production, logistical and innovation partnerships with key friends, partners, and allies.

It is time for President Donald Trump’s Marshall Plan–and Trump’s plan could be even more consequential. Marshall saved part of Europe. Trump can save the whole free world.

A Time for Choosing

How to get American society up and running generates as many debates and opinions as to how to battle the pandemic. The president has assembled an advisory council and issued guidelines to help tackle the problem. An independent, non-partisan national commission advising the administration is also looking at the challenge, but from an even broader perspective. The commission is pulling together a five-phase plan, the last phase will establish “U.S. leadership in leading the free world in economic recovery”–a clear recognition that America’s recovery can’t be accomplished solely within the confines of our borders.

Just like responding to the virus, however, we can’t wait and see if the worst-case scenario happens. Let’s stack the odds for success. That’s where partner nations come in.

The free world plays into our recovery in a number of ways.

Partner nations are critical links in our supply chain. For instance, the production lines in the U.S. automotive, telecom and aerospace industries rely heavily on parts from Mexico and Canada. The Orbia mine in San Luis Potosi provides fluorite, an essential ingredient for 80 percent of the world’s asthma inhalers including most of those in the United States. Right now, that mine is shut down. We have sealed an important economic pact in the U.S.-Canada-Mexico Free Trade Agreement, but that’s no help if our economies aren’t ready to trade.

The free world can’t be free if it isn’t strong. Over the last three years, Trump has gotten NATO members to commit to hundreds-of-billions of dollars in new defense spending to strengthen and update the alliance. But our allies won’t be able to meet those obligations if their economies collapse.

America is better off doing business with its friends. Concern about the United States’ overreliance on trade with and supply chains based in China is certainly justified. We all recognize the value of turning to profitable, resilient, responsible, and efficacious trade, production and investment partners. There are strong free-market solutions to achieve that goal. But our friends can’t partner with us if their citizens are unemployed and producing nothing.

To achieve these goals, the vision of U.S. economic recovery must extend to our friends.

Shadow of the Marshall Plan

Without question the most impactful and successful international economic recovery effort in our history was the plan proposed by Secretary of State George C. Marshall after World War II. It helped countries in Western Europe reboot their economies in time to help stave off Soviet pressure to extend the Kremlin’s influence west, beyond the Iron Curtain.

There is much misunderstanding over what the plan actually accomplished. It didn’t just shovel boatloads of aid into foreign capitals. Most of the money went to buy goods from the United States. U.S. assistance was a concrete demonstration of our commitment to Europe, and it provided timely liquidity. But financial aid covered only a small fraction of the total cost of rebuilding. Moreover, the investments were made in partnership. We didn’t tell Europeans what to do nor did we just hand over cash and hope for the best. The reality is, with a little help from us, the European nations rebuilt themselves.

The genius of the Marshall Plan was that, rather than just throw money at the problem, it focused on making specific, critical investments.

Because of its success, the Marshall Plan is often trotted out as a blueprint for every crisis of destruction, like rebuilding Iraq after the Gulf War. It doesn’t work that way. The conditions are never the same, and that has never been truer than in these times. We don’t have massive rubble and starving hordes of displaced people. We have countries that want to get back to work. We need a recovery plan for our times.

Yes, like the Marshall Plan, it must be responsible. We aren’t talking about pallets of traditional foreign aid. Even in normal times, traditional assistance has a spotty record when it comes to delivering better outcomes, improving governance, and advancing America’s interests. Further, the United States has already added trillions to our national debt; adding trillions more won’t help.

Rather, the international component of the U.S. recovery program ought to focus on investment, partnerships, innovation, facilitating trade, promoting economic freedom and boosting free-market economies.

The goals are simple: reboot the U.S. economy as quickly as possible; strengthen our free world partners; and, put the United States and its friends and allies in a stronger competitive position in an era of great-power competition.

The effort ought to start with our most critical strategic partnerships and work down from there.

#1. U.S.-Canada-Mexico. This trade bloc counts for twelve million American jobs. With twenty-six million people out of work in this country, it is vitally important to make sure every one of those jobs comes back online. In particular, it is vital the United States help Mexico beat the coronavirus and strengthen bilateral cooperation now.

#2. The Transatlantic Community. Europe is America’s indispensable strategic partner. It is also home for some of our most important trade, military and diplomatic partners—and I’m not talking about just the more influential nations like Germany. Smaller countries from the former Soviet states in Eastern Europe make outsized contributions and are valuable strategic partners. Europe, like the United States, has been battered by the virus. We need each other.

#3. The Indo-Pacific. The United States has long been an Asian power. To sustain that status, we must partner with like-minded nations in the region like the “Quad-plus” grouping–Japan, South Korea, India, Vietnam, Australia, and New Zealand, as well as Taiwan–all of which are banding together to coordinate efforts against the coronavirus.

#4. Greater Middle East. Peace and stability in this region are a critical U.S. interest. The coronavirus can only make problems worse in this already troubled part of the world. Washington has to worry about that. We need to partner with like-minded nations interested in the future prosperity of the region.

#5.  Contested Space. Parts of the world, like much of Africa, are weighted under the threat of everything from the coronavirus to poor governance, environmental challenges, lack of economic freedom, transnational terrorism, and the destabilizing activities of Beijing. They can become better partners for the United States, but only if these perplexing problems are addressed.

Any U.S. Economic Recovery Partnership is going to have to be tailored for the unique conditions of each region, much like the Marshall Plan was designed to address the needs of postwar Western Europe. These plans, however, ought to include common elements.

Dealing with the public health threat of coronavirus everywhere, just like in the United States, is a prerequisite for economic recovery.  The United States is already an unsung global leader in this effort, from sharing ventilators with Mexico to providing emergency assistance for Greenland and much, much more. This leadership remains vital.

#1. Invest. The United States ought to be looking for opportunities to invest and encourage private sector investment that will advance strategic objectives, promote growth, and bring a return on commercial investments. The U.S.-supported Blue Dot Network offers a good framework for identifying the right opportunities for development finance. One great example of the kinds of strategic investments the United States should look for is the Three Seas Initiative, a cooperative effort to build infrastructure in Central Europe that would yield important strategic and economic benefits to all parties involved.

#2. Enable. Here, for example, the United States should act to restore and expand trade and investment flows.  One way to jump-start this process would be to eliminate tariffs on intermediate goods (i.e. those goods used by manufacturers to produce other goods).  The United Stats should also aggressively pursue mutually beneficial trade deals such as a US-UK agreement and a digital trade treaty with the European Union.