Trump’s Nightmare: Not Impeachment but Losing His Business Empire 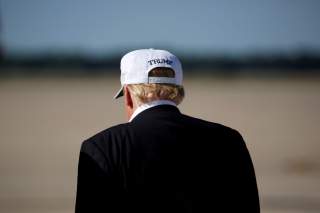 Robert W. Merry recently wrote on August 23 in The National Interest that, "History Shows Impeaching Trump Will Not Be Easy." This may be true even if the Democrats pull a rabbit out of a hat and secure control of both the Senate and the House. That will be quite a feat since polls show they are likely to win the House but not the Senate and this is a consensus among those who track electoral politics. Whatever the circumstances, historically it is difficult to impeach a President—e.g., Bill Clinton—or punish a high-profile politician like John Edwards for wrongdoing. The constitutional and structural barriers aside, Merry observes that the country is deeply divided on this matter and barring new explosive revelations regarding Trump's impeachable behavior, he will remain in office until 2020. The nation, of course, will suffer since the anger, disunity, and friction that will prevail throughout this period will make it well nigh impossible for the government to address a host of critical problems, foreign and domestic.

Revelations last week that Trump's former lawyer, Michael Cohen has claimed the president is a co-conspirator in misusing campaign funds and promises to provide additional information about Trump's criminal behavior suggests a lot more bad news is in the works. The conviction of Paul Manafort clearly has unsettled the president and so has the news that two of his closest allies and business associates, Daniel Pecker, the CEO of the National Inquirer, and Allen Weisselberg, the financial director of the Trump Organization, have been granted immunity for unnamed crimes by authorities who no doubt have their sights set on Trump. And this dismal picture does not include what Robert Mueller may find in his investigation and incriminating evidence from as yet unidentified sources. Perhaps the biggest concern of Trump's West Wing entourage is the storm of tweets that will be forthcoming, many of which will place him in grave legal jeopardy. Nonetheless, in spite of such revelations, Merry is right, it is unlikely that Trump will be impeached, and most prominent observers from a broad spectrum of political affiliations are of the same opinion.

But there is a problem here. Even if the Democrats only take the House, they will control all the committees that conceivably have the right to conduct hearings on a range of matters regarding Trump—intelligence, armed services, foreign affairs, taxation and the like. In addition, they will have a speaker of the House—Pelosi or someone else—that will provide the authority and resources well-nigh unlimited in scope to conduct hearings, name witnesses and issue subpoenas. Some will focus on matters that preoccupy Mueller such as a conspiracy with Russia, obstruction of justice and the misuse of executive power for personal economic gain, but they will be secondary to the primary thrust of the House's campaign: to force Trump from office. This will be done by offering Trump a deal he can't refuse—resign or face the prospect that your business empire will be destroyed and members of your family will face prison terms. For instance, reports that Jared Kushner and his wife Ivanka Trump have exploited their government positions to advance their business interests have been cited but up to now have been ignored by legal authorities. Then too, at some point in time, perhaps after Trump leaves the White House, protections that he enjoyed as president will expire, and he will face an alarming prospect: an address change from Trump Towers, Mid-Town Manhattan to Rikers Island, New York's East River.

One does not have to look hard to identify a plethora of activities on Trump’s part that have been deemed criminal. Paul Waldman lists a number of them; Trump University; his various casino ventures that went bankrupt; his deals with contractors and decision to hire foreign workers and finally also his connections to mafia figures involved with his New York buildings and construction.

And this is only part of the list, other possible areas of interest involve his taxes. Looking at all of these dodgy matters consider the multitude of contractors, drywall companies, construction engineers, financial institutions and former partners who have had unpleasant dealings with Trump, but for a multitude of reasons did not sue him for damages. Weekly House committee hearings will encourage them to do so, and in those cases where state law is involved, Trump's pardoning powers will be nullified. Also, keep in mind there are legions of rogue, but talented lawyers, like Michael Avenatti who are keen to make their name—even pro-bono—to secure national attention as they represent individuals and firms burned by the Trump Organization. He has shown them the way to fame, and with a shift in power on the Hill, attorneys like him will have an expanded field of fire that they will cover with legal assaults on a president in extreme difficulty.

As of now with Trump in retreat and facing a phalanx of other awful revelations for the rest of his term, he will encounter a blood-thirsty scrum of business enemies who are out for revenge. Authorities in several states will join the chorus of legal enemies. Unlike the recent past, Trump is vulnerable, and his prospects are likely to get worse, not better. Furthermore, his base might stay loyal, but when he considers comrades in the GOP with whom he can share a foxhole, he may find the pool minuscule at best. Last week Trump was lashed by Attorney-General Jeff Sessions' remarks that he will conduct the Justice Department's work without bowing before the White House. The Republican Campaign Committee also has encouraged GOP candidates to separate themselves from the White House if necessary, and Fox News business reporter Neil Cavuto roasted the president for warning that if he were impeached the economy would collapse. Cavuto said, "You are so darned focused on promoting a financial boom that you've failed to see that you're the one creating the moral bust." Something genuinely significant is afoot among some of the president's most important supporters, and it does not bode well for him going forward. Will principled conservatives that have remained silent speak out and make public concerns about the Trump presidency that they make in private? From recent developments, we may be approaching that inflection point.

As reports from the White House indicate, Trump has found that being president is not all that he hoped it would be. Furthermore, Trump is a man in his seventies who may eventually decide he should make a deal with the Democrats. After all, he is faced with the prospect of returning to the good life of opulence and unfettered TV, or else facing unrelenting efforts on the part of emboldened enemies intent on punishing him in a variety of ways, including prison. What is more, it appears that in spite of character flaws biblical in magnitude, he is a loving father and as he faces his maker, he can take pleasure in leaving to his children a prosperous world-famous business enterprise or what remains of it. Moreover, if he tries to fight it out, he is likely to face a brutal prospect—one or more of his children will be found guilty of crimes that means significant jail time for them.

For a deal maker of his prominence, there is only one answer to the question: “will he embrace resistance or surrender and hope to retain part of his business—his life’s work—and freedom for his children?”

Dick Krickus is distinguished professor emeritus at the University of Mary Washington and has held the H. L. Oppenheimer Chair of Warfighting Strategy at the U.S. Marine Corps University. His forthcoming book is America’s Tragic Crusade in the Middle East and the Trump Malignancy.