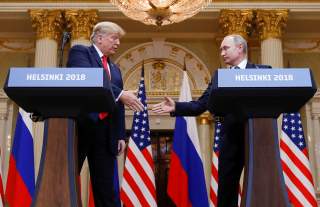 But Vladimir Putin has in the past bragged about making the most of a weak hand, asserting Russian influence around the world beyond what the country’s intrinsic might would predict. In Trump, Putin has found an American counterpart whose limited focus and inward-looking policies have the United States relinquishing its influence in various parts of the world.  In this process of withdrawal, Trump has occasionally welcomed Russia stepping in as a replacement for U.S. involvement in order to speed up the process, but Trump has for the most part simply not concerned himself with the aftermath of American withdrawal.

As Trump nears the end of his first term in office, however, his goal of pulling back American engagements has proved difficult in practice. In the Middle East, for example, Trump has actually committed more troops to the region to defend Saudi Arabia and otherwise counter Iran, employed threats to maintain the presence of U.S. troops in Iraq after fallout over the killing of Iran’s Maj. Gen. Qassim Suleimani on Iraqi soil, and reengaged with NATO as part of the evolving American Middle East strategy.  With the killing of General Soleimani, moreover, Trump has shown a newfound willingness to use American military might as opposed to merely threatening the use of force. This new assertiveness of the Trump administration may provide a check to Russian expansion in the Middle East and more generally give Moscow concern that America would oppose more aggressive Russian expansion in the future.

To truly check Russian ambition, however, the Trump administration or a successor government would have to refocus attention on perceiving Russia as a threat meriting specific strategies and action. Should a Trump presidency remain indifferent to large swaths of the world, or a new American administration get distracted by threats such as China, Iran, North Korea or the continuing War on Terror and fail to stand up to Moscow when necessary, Russia can continue to accumulate easy victories around the world. Without renewed vigilance on the part of the United States, Putin may move his country closer to being the great power it has long pretended to be, undermining American interests and democratic values in the process.

Dr. Christopher Rhodes is a lecturer in Social Sciences at Boston University, where he teaches courses on Western civilization, as well as Identity Politics in the United States. His most recent academic publication "Evangelical Violence: Western Christianity and the Use of Force Against the Third World" (2019) was published in the journal Third World Quarterly and appears in the edited volume Violence and the Third World in International Relations (Routledge 2019). He regularly contributes to UnHerd.com (articles include "How Africa is Converting China" and "Give This Man a Nobel Peace Price," republished as "Who is Abiy Ahmed?" after its subject was awarded the prize) and has been a featured guest on the China in Africa podcast.