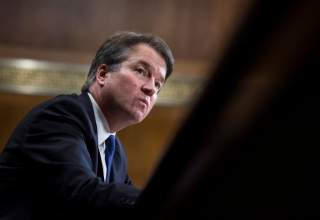 There are no boundaries left to cross. That was clear when Brett Kavanaugh had to go on national TV with his wife to explain when and how he lost his virginity.

And there are no secrets left anymore, at least no big ones. What some had privately concluded about the kind of society progressives really want has been exposed for all to see by the Democrats’ effort to destroy someone who appears to be a decent man and skilled jurist.

I should have known the great revealing would have come from the Senate Judiciary Committee. It had to be in that acrimonious body, because the nexus of progressivism has to be the courts. This became particularly true after the Cold War ended—after the unmistakable failure of socialism and societies that were ordered by political correctness above all else. If progressives couldn’t convince their fellow citizens to vote for the social reordering that they sought, then they could only rely on the courts.

What Sen. Lindsey Graham disdainfully said to committee Democrats on Thursday—“Boy, you all want power!”—is now evident to all. Their efforts with Kavanaugh were never about whether a presidential nominee was qualified to do a job and was free of personal conduct risks that could have impeded his work—what the framers of the Constitution presumably intended when giving the Senate the sole power to consent to nominees.

Instead, Democrats turned the initial round of hearings on Kavanaugh into a frenzy of unruly behavior and disruptions. Germany’s short-lived Weimar legislature between the wars had more orderly and democratic proceedings.

And then came the big lies. We will never know for certain if Christine Blasey Ford was sexually assaulted in 1982, and if so, by whom. On Thursday, she came across as someone who believes she had been assaulted. Certainly her handlers and lawyers had prepared her well. While she seemed less credible than Anita Hill, the professor who accused court-nominee Clarence Thomas in 1991, Ford also came across as less obviously political.

But this worked only so well, especially up against Republicans’ brilliant move to recruit Rachel Miller, the sympathetic but no-nonsense sex-crimes prosecutor from Arizona, to ask questions of Ford. Senators can learn from Miller’s method of asking clear questions with minimal preface, and letting the answers sink a witness on their own.

That Ford failed to implicate Kavanaugh, lacking even the most abstract circumstantial or direct evidence of his involvement, is made clearer still by the pathetic closing play by Democrats who asked that the FBI investigate Kavanaugh further. Considering the FBI, White House Counsel, and Congress have delved so deep into Kavanaugh’s background that we have all seen his high school appointment books, this request is frivolous and weak. It’s an obvious trick for more time to gather additional claims against Kavanaugh since the latest ones aren’t working.

Many independents are likely aghast as well. How many of them think it’s fair to have to prove your innocence against evidence-free claims nearly four decades in the past that spring from the blue? Apparently you can lead an honest, respectable life, raise a beautiful family, rise to the top of your profession, pass repeated background checks, advise a president, and be made a federal judge—and yet be treated as a presumed drunken rapist by a committee of people who are among the last in America who should be casting morality stones at others.

Too much has been made clear. I’ve called Donald Trump the Great Revealer, exposing as he has so often that which is sanctimonious and phony in Washington and our broader culture. This episode proves the point further. Derangement over Trump and the power he won in 2016, which obviously includes choosing Supreme Court nominees like any other president, has caused Judiciary Committee Democrats to show the world what goes on in their minds, and the Orwellian way they would run this country if they had the power. This worked for them better when it was an insiders game, known only to a small portion of the population. Now it is the big story of 2018.

All Senate Republicans must do is stick together and confirm Kavanaugh, who deserves the job. They and Trump have fought well for a worthy cause and are on the brink of winning.

Image: Judge Brett Kavanaugh testifies during the Senate Judiciary Committee hearing on his nomination be an associate justice of the Supreme Court of the United States, on Capitol Hill in Washington, DC, U.S., September 27, 2018. Tom Williams/Pool via REUTERS