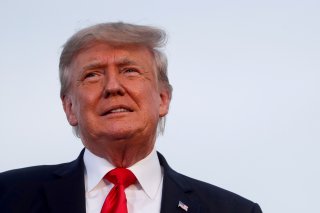 “He praised dictators” is an oft-repeated criticism of President Donald Trump. He sure did. In the service of America’s national interest, so did all other American presidents. One should rather worry when presidents overemphasize global democracy promotion. Or if they praise the wrong dictators.

To win America’s independence, George Washington formed an alliance with the absolute monarch of France who was such a bad ruler that he was deposed by his people and decapitated. To win World War II, Franklin D. Roosevelt allied himself with Joseph Stalin, a Communist dictator who killed tens of millions of his people. During the Cold War, President Richard Nixon visited Beijing and made common cause against the Soviet Union with Mao Zedong, another communist dictator, who killed even more tens of millions than Stalin. One can fairly assume that there was lots of praising in these diplomatic dealings, sincere or not.

And it didn’t stop with World War II. There is always praising when U.S. presidents receive visits at the White House or when they visit foreign capitals. John F. Kennedy warmly received Chung Hee Park, the authoritarian president of South Korea. Jimmy Carter visited the brutal Shah of Iran, Mohammad Reza Pahlavi, whose people later forced him into exile. Reagan received Ferdinand Marcos, the corrupt dictator of the Philippines, and joked when asked how Marcos had become so wealthy on a government salary, that Marcos was an astute investor.

None of these leaders were democratically elected or contenders for humanitarian awards, but their countries and their goodwill were important to the United States. These all took place during the Cold War when the United States needed the support of those ruling strategically important countries and were willing allies as we faced off against a far more dangerous Soviet Union.

On the other hand, after the Cold War and in a benign international environment, President Barack Obama visited Raoul Castro, the Communist dictator of then strategically insignificant Cuba, and achieved nothing for the United States. Even harder to understand is why Barack Obama brought his wife and daughters on the trip and did the wave with Raoul Castro at a baseball game.

Promoting democracy abroad as a goal in itself, rather than as a tool to achieve policy objectives, has always been a sensitive issue. In 1979, Georgetown professor Jeane Kirkpatrick, later Reagan’s ambassador to the UN, published her seminal essay Dictatorships and Double Standards. She decried Washington’s practice of demanding democratic reforms from dictators supporting the United States while being less insistent with Communist rulers who opposed the United States. She argued that it was not in the interests of the United States to demand rapid liberalization in countries without democratic traditions if the result is the replacement of a pro-U.S. dictator with an anti-U.S. dictator. The United States should still encourage progress towards democracy, she wrote, but through a long and gradual process.

History has proven her right. Carter withdrew his support for the Shah of Iran and encouraged him to leave his country. The Shah’s regime was succeeded by a fanatically anti-American theocracy. Egypt’s president Hosni Mubarak was toppled after Obama withdrew U.S. support from him, only to be replaced by Islamist president Mohamed Morsi, no friend of the United States, who led a brutal and unpopular regime. Morsi was in turn toppled in a 2013 military coup by Gen. Abdel Fattah el-Sisi, no democrat either, but a friend of the United States.

Russia’s Vladimir Putin has been quick to exploit our tendency to withdraw support from imperfect allies. At a press conference shortly after he ordered his military to support the dictator of Syria because he was a Russian ally, he observed that the problem with U.S. policymakers is that they think that if they topple an imperfect friend, he will be replaced by “one of the four liberals they met at a library. The world doesn’t work that way,” he said. Also, he asked, “How did that work for them in Libya?”

This brings us to President Joe Biden’s policy of global democracy promotion and today’s great power confrontation with China and Russia. In this contest, the United States will need lots of allies and some of them will be imperfect democrats and even dictators. Democracy promotion should never be abandoned but must be implemented in a nuanced way. Will Biden criticize the democratic shortcomings of India and the Philippines and thereby alienate these two critical partners in countering China? How about Poland and Turkey, exceptionally important countries in checking Russia? The democratic credentials of Egypt and Saudi Arabia are worse still, yet they are indispensable partners in opposing Iran, the world’s largest state sponsor of terrorism.

Winston Churchill offered a memorable remark on these matters. England was facing Nazi Germany alone and was in desperate need of allies. The Soviet Union became England’s ally only after Adolf Hitler invaded it. Churchill hated communism but was happy to get Stalin as an ally and praised him in public. And he was prepared to go much further: “If Hitler invaded hell I would make at least a favorable reference to the devil in the House of Commons,” he said.

David A. Keene is a member of the board of the Center for the National Interest and a former Chairman of the American Conservative Union.

Dan Negrea held leadership positions in the Department of State’s Policy Planning Staff and Economic Bureau during the Trump Administration.