Is the Trump Administration Confused on China? 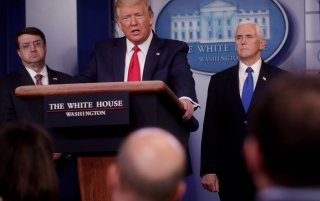 In recent days, President Trump has foreshadowed what’s hopefully coming: as the coronavirus crisis that has cut short 100,000 American lives ends, it will be time to turn to assessment and recrimination, including punishing China, which allowed the virus to spread. He could go even further and treat China’s government as the enemy it is.

Last week, Trump said of the virus: “It came from China. We are not happy about it. We just signed a trade deal, the ink wasn’t dry and all of the sudden this floated in. We are not going to take it lightly.”

Referencing a German idea of demanding reparations from Beijing, Trump said, “We are talking about a lot more money than Germany’s talking about. We haven’t determined the final amount yet. It’s very substantial.”

Like much of America, Trump is edging toward a reluctant conclusion that we are in a new cold war because of China, and that this conflict calls for the free world to confront Beijing and put pressure on the ruling Communist Party.

Why then did the White House just issue a stinker of a report to Congress proclaiming, “We do not seek to contain China’s development, nor do we wish to disengage from the Chinese people”? The document also declares, “Competition need not lead to confrontation or conflict,” and “…we welcome cooperation where our interests align.”

Where exactly do our interests align with a country that just got 100,000 Americans killed, steals our technology, wages cyberwar against us, and which is in the midst of one of the most threatening military buildups in modern history?

Another gem from the report: “United States policies are not premised on an attempt to change [China’s] domestic governance model…” In other words, fear not Xi Jinping, we won’t even talk about how foreign aggression stems inherently and congenitally from China’s communist government or our desire maybe to cause problems for the regime that lords over 1.4 billion people without their consent. One wonders what would have happened if Ronald Reagan had taken this approach with the Soviet Union instead of calling it an “evil empire” whose ideology would be consigned to “the ash heap of history.” Maybe there would still exist a USSR about which bureaucrats could write mealy-mouthed reports.

Elsewhere in the document one finds globalist paeans to a “free and open rules-based order.” Pray tell, how does one contact this “rules-based order” when China crushes its next set of victims? Such a postmodern construct simply doesn’t exist in reality. If our own national security types don’t believe in the concept of a free world led by America resisting critically threatening governments like China’s, who will?

The sad thing is, the administration’s own policies, actions, and statements about China are much better than this, and the report itself has some good points, especially deeper in the text. On trade, it notes, “The list of Beijing’s commitments to cease its predatory economic practices is littered with broken and empty promises.” More broadly, it observes, “…the United States now acknowledges and accepts the relationship with [China] as the [Communist Party] has always framed it internally: one of great power competition.”

But therein lies the biggest rub of all: this convoluted, contradictory document leads to more questions about our China policy than it answers. Considering the report was the work of many agencies, it serves to demonstrate just how dysfunctional and even useless vast swaths of our national security bureaucracy really are.

The report shows that less than a year from the beginning of what is likely to be a second Trump term, the administration still struggles to manage policy and personnel. It is often unable to translate presidential sentiment and views into coherent policy that impacts the real world and then communicate that policy persuasively.

It is another reminder that the administration is staffed with precious few individuals who understand or care what the president seems to want. Personnel lapses have nearly ended Trump’s presidency several times. They led to the prolonged Mueller investigation, the impeachment, and the need to rely on economy-flattening bureaucrats like Anthony Fauci during the current crisis.

Will policy and personnel management improve, perhaps with nudging from a Congress that is increasingly furious with the Chinese government? A movie quote comes to mind from “Dr. Zhivago,” when in response to communist rabble singing a Bolshevik anthem, the movie’s villain sardonically remarks, “No doubt they’ll sing in tune after the revolution.”

Few administrations improve in their second term. But hopefully, Trump can defy the odds, reach the logical conclusion that we should seek the nonviolent end of the Chinese Communist Party, purge those in our national security bureaucracy unable to pursue this policy with aplomb, move American power from Europe and the Atlantic to the Pacific, and speak in plain terms to our citizens about the strategy and tactics we’ll need to beat China.

That is the report they need.