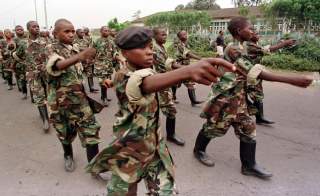 In what is becoming a yearly disappointment, the Trump administration again missed a key opportunity to encourage foreign governments to stop recruiting and using child soldiers. Late last month when President Donald Trump released his determinations with respect to the Child Soldiers Prevention Act (CSPA) of 2008, he declared that it is in the national interest of the United States to provide U.S. military assistance to seven countries known to recruit/use—or support the recruitment/use of—children in armed conflict. In so doing, the Trump administration chose to overlook notable human-rights concerns and undermine U.S. efforts to prevent the use of child soldiers.

Ten years ago, Congress passed the CSPA with the goal of leveraging U.S. arms transfers and military assistance to dissuade foreign governments from recruiting and using children in their national militaries or government-sponsored armed groups. The CSPA requires the secretary of state to identify countries that recruit and use child soldiers. Once listed, those governments are prohibited from receiving seven specific categories of U.S. military assistance provided by the Departments of State and Defense. These programs are often the most coveted by foreign governments and include: direct commercial sales, excess defense articles, foreign military financing, foreign military sales, international military and education training assistance (IMET), peacekeeping operations assistance (PKO) and Section 1206 assistance.

In June 2018, the State Department identified eleven countries as violators under the CSPA: Burma (Myanmar), the Democratic Republic of Congo (DRC), Iran, Iraq, Mali, Niger, Nigeria, Somalia, South Sudan, Syria and Yemen. While under the law these countries are technically prohibited from receiving U.S. military assistance in fiscal year (FY) 2019, the president can waive the CSPA’s prohibitions and allow these identified governments to remain eligible to receive U.S. weapons and military assistance.

In its release of the presidential waivers last week, the Trump administration announced that it was waiving CSPA prohibitions for seven of the eleven governments identified on the State Department’s child soldiers list, thereby allowing all the military assistance requested by the U.S. government to Iraq, Mali, Niger, Nigeria, Somalia, South Sudan and Yemen to proceed, despite their records of using or supporting the use of child soldiers. Yemen, however, is currently not slated to receive any CSPA-relevant military assistance in FY 19.

The only government facing any consequences from its continued use and recruitment of child soldiers is the DRC. The DRC had been slated to receive funds through IMET and PKO, but it is now ineligible to receive this assistance because it did not receive a waiver from the Trump administration. That means that DRC will miss out on $375,000 in IMET and more than $2 million in PKO assistance due to their continued use of child soldiers.

One government out of eleven. Or, put another way, an implementation rate of less than 10 percent for a law that the U.S. government has traditionally held up as a key instrument for combating human trafficking in the form of child soldiers. Governments choosing to abuse their most vulnerable populations can continue to do so without being held accountable. The Trump administration continues to send the wrong message and fails to emphasize that abuse of children will not be tolerated. Instead, the Trump administration is actively ignoring the plight of affected children around the world and demonstrating that its assurances to protect children ring hollow. The CSPA’s drafters intended the waivers to be used judiciously to address national-security needs. However, the Trump administration is instead using the waivers to continue arming perpetual violators of the law. Children exploited by parties to armed conflict deserve better.

Rachel Stohl is managing director at the Stimson Center and Shannon Dick is research associate with the Conventional Defense Program.