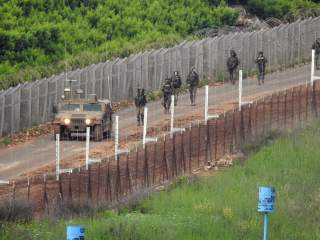 Taking all of this under consideration, it is clear that the Trump administration’s mission of mediating between Israel and Lebanon so as to demarcate their maritime and land borders and pacify their tinderbox border is no small feat. Yet, in a painstaking and persistent manner, the administration, led by Secretary of State Mike Pompeo and Satterfield, has used the right dose of diplomacy, statecraft, and at times, pressure to bring the two antagonists to agree on an initial set of measures to address their longstanding grievances.

Satterfield, in a space of two weeks in May, was able to bring the two countries to tentatively agree to meet and hold negotiations at the unifil headquarters in Naqoura in south Lebanon. Reportedly, Lebanon and Israel are close to establishing a framework for negotiations under UN auspices. Lebanon’s demands and Israel’s objections to hold the negotiations under the auspices of the UN were met by having the United States act as an overseer. So as to avoid the public appearance of speaking to the enemy, the two sides are sending military officers to hold the negotiations. Similarly, Israel apparently sent a “positive” message with Satterfield to Lebanon: it will reconsider the demand that negotiations should be limited to six months instead of there being no limit at all.

Satterfield was apparently able to ensure from Lebanese president Michel Aoun, a political ally of Hezbollah, a promise of his country’s “unified position” regarding linking the demarcation of both the maritime and land borders. In contrast to Hezbollah’s loud and bellicose rhetoric, President Aoun has reportedly stressed to Satterfield that, although Hezbollah is viewed as a legitimate resistance movement with popular support and representation in the government, demarcation of both the land and maritime borders with Israel is imperative to peace in the region. American and Israeli authorities have been concerned about Hezbollah taking a divergent stance regarding the talks. To be sure, reports from the president’s office indicate that Hezbollah’s view of maintaining the peace along the borders with Israel is at the heart of its tacit endorsement of the president’s “unified position.” Hezbollah’s main concern has been about Washington using its mediation of the border disputes as a condition to degrade the deterrence of Hezbollah’s missiles.

Evidently, Satterfield, along with members of his team, showed President Aoun, Speaker of the House Nabih Berri, Prime Minister Saad Hariri and Army Commander General Joseph Aoun pictures of the missiles and their respective locations. But the U.S. delegation did not make a link between the issue of the missiles and that of border demarcation. Hezbollah’s leader Hassan Nasrallah, in a recent fiery speech on Jerusalem Day (Also known as Quds Day, an event inaugurated by Iran’s Ayatollah Ruhollah Khomeini in 1979 to express solidarity with Palestinians and opposition to Zionism), admitted that Hezbollah does not have factories to develop precision missiles, but asserted that the “Americans have no business with this. It is our right to have weapons to defend our countries.”

Notwithstanding Hezbollah’s rhetoric, Lebanon would like to resolve its maritime border dispute with Israel in order to access nearby oil and gas resources. Beirut is already set to start drilling in December, with a later date in the disputed block with Israel. The country could certainly use the economic boost: Lebanon’s government is burdened with a heavy international debt estimated at more than $85 billion, comprising over 150 percent of its gdp. And its income from the tourism sector, a major component of the economy, is virtually in doubt, given the ongoing crisis in Syria and the heightening tensions between the United States and Saudi Arabia on one side and Iran and Hezbollah on the other. Meanwhile, many Lebanese across the communal divide have been deeply affected by the country’s weak economy and severe power shortages. No less significant is Hezbollah and its Shia partisans’ need for this potential new energy revenue. After all, the Hezbollah’s military wing has been fighting a costly war in Syria, while at home, U.S. sanctions have significantly reduced the organization’s revenue stream. Conversely, Israeli energy minister Yuval Steinitz’s office released a statement emphasizing that the talks could be “for the good of both countries’ interests in developing natural gas reserves and oil.”

IT BEHOOVES the Trump administration to separate this current Lebanon-Israel negotiation from the separate but also ongoing Israeli-Palestinian “deal of the century.” Lebanese parties and groups across the political divide are worried that the Trump administration is seeking to put pressure on Lebanon to bring it on board with its proposed Israeli-Palestinian deal, namely via the suggestion that Palestinian refugees in Lebanon should be granted Lebanese citizenship. This central concern is intensified by the presence of approximately one million Syrian refugees and thousands of their Lebanese-born children whose repatriation to their homeland is not certain. The Shia, Christian and Druze communities will refuse any attempt to formally settle and/or nationalize Palestinian or Syrian refugees, since most of them are Sunnis. Doing so would result in the collapse of Lebanon’s delicate religious balance, and with it, its communal peace.

The United States has deftly capitalized on the rising tension in the region, the threat of war, and the delicate existing economic and political dynamics to pursue quietly a channel of diplomacy with Israel and Lebanon. During Satterfield’s recent July shuttle diplomacy though, a couple of problems have surfaced that have left both sides frustrated over the delay in launching the talks. According to Lebanese and Israeli reports, whereas Lebanon would like to have parallel land and maritime border talks, Israel will not sign off on a written commitment to simultaneously pursue these. Israel, for its part, would like the talks to focus solely on the maritime border. This is partly because Jerusalem worries that, since the UN regards them as part of the Golan Heights tri-border dispute, including the Shebaa Farms in the negotiations would add a complicating Syrian dimension to the talks. Moreover, whereas Beirut insists that the UN should sponsor the talks with U.S. mediation, Jerusalem has asserted the preeminent role of the United States in mediating the talks, partly because Israel is not a signatory of the UN Convention for the Law of the Sea. Nevertheless, despite this frustration and these impediments, both capitals believe that it is in their interest to reach a compromise and launch the talks.

If the two countries were to reach an agreement on the demarcation of their borders, that would by itself be a significant foreign policy achievement, reducing the threat of a devastating war to a minimum. Pending the final framework and unfolding of the negotiations, an agreement over the disputed maritime borders could either promote a parallel agreement over the more complicated land borders or provide a critical incentive to keep the border quiet. This is extremely important for a region that is, according to an Arabic saying, “standing on the palm of Afrit (a malevolent supernatural being).”

Robert G. Rabil is professor of political science at Florida Atlantic University (FAU). He is the author of numerous books, most recently White Heart (2018). The views expressed in this article do not necessarily reflect those of FAU.