Trump Airs Nationalism and Globalism Gripes at the UN 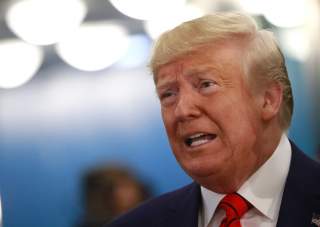 At the United Nations General Assembly in New York today, the heavyweights of world politics announced ambitious nationalist agendas. World government seemed to be out, while national sovereignty was in. But the devil was in the details, as President Donald Trump hedged with appeals to the international order and human rights.

Trump laid out a vision of a future that “does not belong to globalists” and the “permanent political class,” but to “wise leaders” who “always put the good of their own people and their own country first” and “honor the differences that make each country special and unique.”

“The free world must embrace its national foundations. It must not attempt to erase or replace them,” Trump said. “If you want freedom, take pride in your country. If you want democracy, hold on to your sovereignty. And if you want peace, love your nation.”

“The essential divide that runs all around the world and throughout history is once again thrown into stark reality,” he warned. “It is the divide between those whose thirst for control deludes them into thinking they are destined to rule over others, and those people and nations who want only to rule themselves.”

Other world leaders were similarly defiant.

Denouncing the international response to massive fires in the Amazon basin, Brazilian president Jair Bolsonaro opened the General Assembly with a complaint that other countries “even called into question that which we hold as a most sacred value, our sovereignty.”

In a speech defending “multilateralism” on climate change, Macron indirected rebuked Bolsonaro, who has feuded with the French leader. He referred to the effect the Amazon has on countries outside of Brazil, before refusing “to go into more detail there.”

Turkish president Recep Tayyip Erdoğan opened his speech with a favorite line: “the world is greater than five,” which refers to the five permanent members of the UN Security Council. He went on to demand Turkey’s right to pursue nuclear weapons, reiterating comments that have frightened other world powers.

Trump directly named a few of the ways that the “faceless bureaucracy operates in secret, and weakens democratic rule."

At home, “a small number of social media platforms are acquiring immense power over what we can see and over what we are allowed to say.” Abroad, the Arms Trade Treaty threatens Americans’ “right to self-defense,” while unnamed actors are asserting a “global right to taxpayer-funded abortion on demand, right up until the moment of delivery.”

Trump used the ongoing trade war with China to attack the belief that globalization is an automatic force for good.

“In 2001, China was admitted to the World Trade Organization. Our leaders then argued that this decision would compel China to liberalize its economy,” he said. “Two decades later, this theory has been tested and proven completely wrong.”

“The world fully expects the Chinese government will honor its treaty made with the British and registered with the United Nations, in which China commits to protect Hong Kong's freedom, legal system, and democratic way of life,” he continued, referring to ongoing protests against the central government in the semi-autonomous city-state. “How China chooses to handle the situation will say a great deal about its role in the world in the future.”

When he turned to migration, Trump similarly blended nationalism with appeals to international cooperation and the use of U.S. power.

Attacking “open-border activists, who cloak themselves in the rhetoric of social justice” as a “growing cottage industry of radical activists and NGOs that promote human smuggling,” he denounced irregular migration as “unfair, unsafe, and unsustainable for everyone involved.”

He bragged about corralling together an international alliance to seal off the U.S. border, including his efforts to strong-arm Mexico into deploying troops on its border with Guatemala.

Trump also brought up the success of diplomacy in North Korea, pairing it with a rebuke of past U.S. interventions overseas: “America's goal is not to go with these endless wars, wars that never end.”

But on Afghanistan, Venezuela, and Iran, Trump’s speech echoed longstanding neoconservative policy more closely than his own “America First” line.

“Unfortunately, the Taliban has chosen to continue their savage attacks,” he said, apparently reversing his stated intention to withdraw from Afghanistan. “We will continue to work with our coalition of Afghan partners to stamp out terrorism and we will never stop working to make peace a reality.”

“We await the day when democracy will be restored, when Venezuela will be free, and when liberty will prevail in this hemisphere,” Trump said. “The dictator [Nicolas] Maduro is a Cuban puppet, protected by Cuban bodyguards, hiding from his own people while Cuba plunders Venezuela’s oil wealth to sustain its own corrupt, communist rule.”

“Since I last spoke in this hall, the United States and our partners have built a historic coalition of fifty-five countries that recognize the legitimate government in Venezuela,” Trump elaborated. The United States recognizes Juan Guaidó as the leader of Venezuela.

Venezuelan delegate Daniela Rodríguez, who represents Maduro’s government, was seen reading a book about Latin American independence leader Simón Bolívar during the speech. “This is the book that I read while @realDonaldTrump profaned the [UNGA] with his xenophobic and imperialist discourse,” she later stated on Twitter.

Even more vehemently than he spoke on issues in America’s backyard, Trump invoked a threat halfway across the world: “One of the greatest security threats facing peace-loving nations today is the repressive regime in Iran. The regime's record of death and destruction is well-known to us all.”

Trump’s complaints included Iran’s ballistic missile program, its military intervention in Syria, its support for armed groups in Yemen, and its anti-Israel rhetoric. He also accused the Iranian government of “squandering the nation's wealth and future in a fanatical quest for nuclear weapons and the means to deliver them.”

After years of accusations that it was pursuing nuclear weapons, Iran agreed in 2015 to give up its enriched uranium stockpile and submit its nuclear program to international inspections. Trump, however, violated the deal in 2018 by reimposing economic sanctions in a “maximum pressure” campaign.

According to Trump’s speech, “terrible” deal had “very little time remaining, did not allow inspection of important sites, and it did not cover ballistic missiles.”

Since the maximum pressure campaign began, Iran has brought back its stockpile of enriched uranium. After a summer of tensions in the Persian Gulf, oil facilities in Saudi Arabia were blown up last week. France, Germany, Britain, and the United States blame Iran for the attack, which it denies carrying out.

The attack apparently torpedoed efforts to bring the United States and Iran back to the table by Macron, who had proposed a $15 billion line of credit for Iran. Macron’s efforts and the firing of the hawkish U.S. National Security Advisor John Bolton had sparked speculation that Trump and Rouhani were going to meet at the General Assembly.

But in his speech, Trump thundered that “no responsible government should subsidize Iran's bloodlust. As long as Iran’s menacing behavior continues, sanctions will not be lifted. They will be tightened.”

Despite the setback, Macron attempted to keep the door to diplomacy as open.

“The time has come for negotiations to resume,” he said, calling for talks between Iran, the signatories to the nuclear deal, and other powers in the Middle East. “We have a risk of a serious conflict based on miscalculations.”

“I do not believe in miracles. It takes courage to pursue peace,” Macron continued. “Courage means not simply provocations or reprisals.”

U.S. authorities had delayed the visas of Iranian diplomats and restricted their movement to a few city blocks. That didn’t prevent them from conducting sideline diplomacy, including a photographed handshake between Rouhani and Macron.

Netanyahu, a longstanding opponent of the nuclear deal, was scheduled to speak at the United Nations, but dropped out after an electoral defeat forced him into a political slug-fight to keep the prime ministership.

Rouhani’s absence was harder to explain. The Iranian president had earlier announced that he was set to unveil a regional peace plan at the meeting. But he was not on the speakers’ lineup released the previous night.

Iran’s mission to the United Nations did not respond to a request for comment prior to the publication of this story.