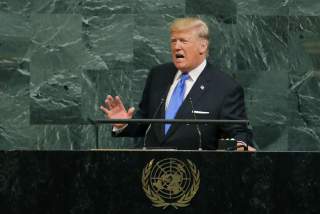 When Donald Trump addressed the United Nations General Assembly on Tuesday, he reserved some of his toughest language for Venezuela. His rhetoric prompted Bloomberg’s Eli Lake to conclude, “Trump went full neocon for Venezuela. Its leader, Nicolas Maduro, is a dictator ‘stealing power from his own people.’ Whereas Trump was vague about what his plan was for North Korea and Iran, for Venezuela he came very close to calling for regime change.”

But for others, including allies of the president, going full bore against Nicolas Maduro’s regime could be a distraction. They’re urging caution. Former White House official Sebastian Gorka, who helps run the new “MAGA [Make America Great Again] Coalition,” called Venezuela “not vital,” in comments to me. And Gorka, who has criticized neoconservatism, told Newsweek Thursday that former White House Chief Strategist Steve Bannon helped write the address, and that it was a “classic MAGA” speech (the White House denies this claim), not an announcement of conversion to Bush-era policies. On Venezuela, Gorka stopped well short of calling for regime change, but told me that the United States does still “have a role in calling out the regime and making their dictatorship struggle.”

Some in the Pentagon think the status quo will essentially continue. In the immediate future, outright intervention—explicitly arming the rebels, or sending in U.S. forces, etc—is “hilariously implausible,” an advisor to the U.S. Navy told me. “It’s not like Grenada in 1982 where Americans are directly threatened. Or Panama in ‘89. I think that the U.S will be content to wait it out.” However, the advisor conceded the president's unpredictability: “But I’m not 100 percent sure.”

The night before his UN address, Trump dined in New York with Michel Temer, Juan Manuel Santos, Mauricio Macri and Juan Carlos Varela, the presidents of neighboring Brazil, Colombia, Argentina and Panama. The group is notably far more right-leaning than it would have been just a few years ago; Temer replaced Dilma Rousseff in Brazil, and Macri ousted the Kirchner dynasty in Argentina. And the group obviously has a keen interest in the stability of Venezuela, once Latin America’s richest country; its outright collapse would become their problem.

Refugee camps are cropping up in Colombia, notes Eric Farnsworth, the Washington director of Council of the Americas and a former Clinton administration official. It’s “unheard of” in the region, he tells me. To get a sense of how far Venezuela has fallen, Farnsworth points out that for much of the latter-half of the last century, the Concord jet flew direct from Paris to Caracas.

A former senior Trump administration White House official explains that figures such as Sen. Marco Rubio have been privately urging a tougher line on Maduro since the inauguration. Rubio is spearheading an unofficial anti-Cuban caucus in Congress. For Rubio and other legislators, the Maduro issue is inextricably linked with the Castro issue. They see the Chavista Venezuelan regime as still very much “a Cuban project,” says Farnsworth.

“I’m grateful to the president and the administration for their strong commitment to the cause of human rights and democracy in Venezuela. I know from talking with the president it’s a personal priority for him and something he cares about,” Rubio told me.

But no senior figure in Washington, apart from President Trump, who said in August “I’m not gonna rule out a military option,” has openly speculated that the United States could invade the country. Instead, the responsible next steps are “clear,” says Farnsworth, if the United States wants to pursue them: more sanctions, a demand of the immediate release of all political prisoners and calling for the Venezuelan borders to be opened to let in international aid.

And it will likely stay that way—decidedly shy of a Washington-led pursuit of “regime change”—for two reasons, says Farnsworth. First, the opposition is divided, with no one clear figure for Washington to rally around. “There’s no Nelson Mandela, in the Venezuelan context. There’s no Aung Suu Kyi, although maybe she’s not the best example these days.” Figures such as Leopoldo Lopez, under house arrest, Henrique Capriles, the governor of the state of Miranda, and Julio Borges, the divisive head of the national legislature and former TV star, have yet to ascend to that level, says Farnsworth. And second, other countries in the region may have veered right, but they continue to harbor great trepidation about violating Venezuela’s sovereignty by ousting its government, even if it increasingly can’t feed its own people.