Trump and Biden Spar at Debate but No Knockout Blows 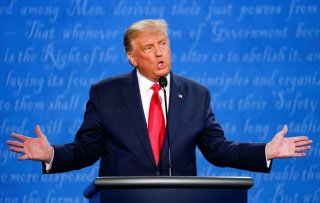 Now that 47 million Americans have already voted, the impact of the third debate may be muted. Neither Donald Trump nor Joe Biden landed any serious blows against each other. For Biden, that constitutes a victory. For Trump, it represents a draw. If the polls are accurate, Trump needed more than that.

Unlike his performance during the first debate, Trump was on his best behavior, or what represents it. He showed that when the chips are down, he is corrigible. He mostly refrained from speaking over Biden and complimented NBC moderator Kristen Welker. Trump defended himself on the pandemic and sought to depict Biden as the kind of Washington politician who had repeatedly failed the country. While Trump blamed the virus on China, he was unable to explain how he would defeat the virus, other than to claim that a vaccine was just around the corner, an argument he has made more than once during the past year. Biden kept pounding away at the over 200,000 deaths on Trump’s watch and suggested that they would soon reach 400,000.

Trump was at his most aggressive in attacking Biden about his ne’er-do-well son Hunter, who embarked upon some foreign escapades to pad his bankroll. Trump tried to depict Biden as a corrupt politician, a veritable Napoleon of crime, but Biden returned fire by pointing to Trump’s own lavish stays at his hotels and clubs, not to mention a secret bank account in China. Biden defended himself and his son by declaring, “nothing was unethical”—which is different from saying that it was fine. He concluded, “It’s not about his family or my family, it’s about your family. If you’re a middle-class family, you’re hurting bad right now.”

What was most revealing about this exchange was that it pretty much represented the extent of the clash over foreign policy. There was no mention of Afghanistan. There was no talk about NATO’s future. There was no discussion of arms-control with Russia or of enhancing American influence in Asia.

Yes, the candidates sparred over Korea. Biden even tried to outflank Trump on the right by suggesting that he had gone soft on North Korea and that he, Biden, would toughen up policy toward Pyongyang. Trump, he suggested, had become infatuated with Kim Jong-un. But Biden’s answer was stale and rehearsed. The notion that America can only meet with North Korea if it pledges to forswear nuclear weapons is counter-productive. It will never happen. Biden should have said he would explore every diplomatic avenue to bring about peace rather than returning to the formulas of yesteryear.

On race and other issues, the debate really came down to a matter of self-definition. They tussled over the 1994 crime bill that Biden originally supported. Trump lurched left, depicting Biden as too tough on “super predators.” But this battle, too, had somewhat of an ancient embers being raked over feel to it. It was the broader themes that mattered. Biden declared, “You know his character; you know my character. You know our reputations for honor and telling the truth.” Trump, by contrast, emphasized that he was a can-do guy: “Success will bring us together.”

Will it? The extent to which America is divided was symbolized by the refusal of the candidates even to acknowledge each other at the conclusion of the debate. It simply ended and the wives of the respective candidates walked onstage to congratulate them. Whether the debate will have much of an effect on the race itself is questionable. Trump firmed up his support among Republicans, while Biden did nothing to damage his current lead. Trump, who has all-but been promising an October surprise, needs to produce one soon.