Trump and Putin To Meet In Paris Next Month 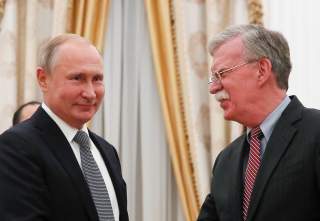 The struggle is on, as always, for President Donald Trump’s mind.

National Security Advisor John Bolton announced Tuesday in Russia that President Trump will meet with Russian president Vladimir Putin in France in November. It will be the first meeting between Trump and Putin since the July Helsinki summit, which was widely lambasted in the Washington establishment but defended by some who advocate a more restrained approach in foreign policy.

Bolton appeared to offer the Kremlin little on Tuesday when it came to the INF Treaty, but did confirm the Trump meeting in France at the time of the one-hundred-year World War I armistice celebrations.

“As far as I can remember, the U.S. seal depicts an eagle on one side holding thirteen arrows,” Putin explained to Bolton, in an exchange that is going viral. “And on the other side, an olive branch with thirteen olives. Here’s the question, ‘Did your eagle already eat all the olives and only the arrows are left?’”

“Hopefully I’ll have some answers for you,” Bolton said in response. “But I didn’t bring any more olives.” Putin replied: “That’s what I thought.”

Bolton on Tuesday reiterated that the United States intends to withdraw from the INF denuclearization treaty between Washington and Moscow.

Bolton says the Russians are in violation of the treaty, even if they won’t admit it.

“So, having an arms-control agreement that limits us on a global basis leaves many of our friends and allies around the world, and potentially deployed American forces, at considerable risk,” Bolton told the Wall Street Journal earlier this week before leaving for Russia.

“And I think that’s something Russia should be concerned about from its own perspective, sharing, as it does, a border with China,” Bolton said, selling the benefits for both sides if the agreement comes to an end.

Sen. Rand Paul, who has staged a political comeback since the 2016 election—vaulting into President Trump’s inner circle—defended Trump at the time of Helsinki. Bolton was mum on the political handicapping of the event, but the hawkish national security advisor has a history of espousing a hardline on Putin’s Russia; on this trip he laid a wreath at a memorial marking the spot of the 2015 assassination of Russian opposition politician Boris Nemtsov.

For his part, Paul said in July that the president should be “lauded” for engaging with America’s adversaries. “Engagement is vital to our national security and peace around the world,” Paul said in a tweet, alluding to a story in the National Interest. Paul, who once said he would block Bolton’s potential nomination for Secretary of State in the Senate, kept up his knife-fight with the national security advisor this week.

“This is why John Bolton shouldn’t be allowed anywhere near US foreign policy,” Paul tweeted Saturday, on the news of the prospective pullout from the INF Treaty. Trump has never been wary of members of his cabinet—or shadow cabinet—infighting, whether publicly or privately. “This would undo decades of bipartisan arms control dating from Reagan,” Paul said. “We shouldn’t do it. We should seek to fix any problems with this treaty and move forward.”

“For Bolton it’s part of his quest to prove his sovereignist worldview correct. He’s a legal theorist, not a strategist, and knows very little about foreign policy outside of international law,” said liberal international relations expert Thomas Wright of the Brookings Institution earlier this week.

The Paul-Bolton battle is emblematic of the broader war over Republican foreign policy in the Trump era: will Trump’s nationalism be manifest more in Boltonian offensive realism or Paulite restraint?

Both political actors—the maverick Kentucky senator and the uber-hawk bureaucrat—seem to think the ball is still in the air.

“Trump has little latitude,” retired U.S. Army Col. Douglas Macgregor told me Tuesday on the INF Treaty fight. “Russian weapons, though likely designed for potential use against the Chinese or Japanese, do violate the agreement.”

But a Department of Defense source informs that the gambit on Trump’s end could be to renegotiate the deal—one of Trump's favorite tactics—and rope the Chinese in.

“However, nothing substantive on our side will change for at least six months unless the Trump-Putin summit produces a new arrangement,” said Macgregor, who’s been considered for national security advisor before. But he’s relatively optimistic: “It might!”

That’s the potential concern for some hawkish elements, who find Paul, Macgregor, and possibly Trump’s tact to be comprehensive and worrisome.

Paul’s broader efforts reportedly include attempting to lift some sanctions on Moscow in the Senate. Eli Lake wrote on Tuesday: “Now Paul is enlisting U.S. Ambassador Jon Huntsman Jr. to help convince his American colleagues of the virtues of U.S.-Russian cooperation. The unusual request is part of Paul’s larger campaign to smooth the way for a possible rapprochement between Trump and Putin.” November 11 will loom increasingly large in speculation about where Trump is headed.