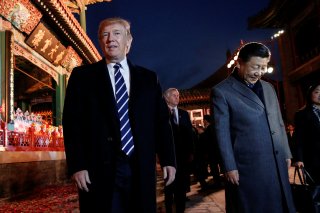 President Trump’s ongoing trip to Asia has focused international attention on the region’s evolving power dynamics. Given the president’s withdrawal from the Trans-Pacific Partnership, Trump’s seeming ambivalence on attending the East Asia Summit, and his transactional approach to dealing with allies and partners, a familiar narrative has reemerged that the United States is abdicating regional leadership. China’s concurrent efforts to fill the perceived void through bold economic statecraft and a global charm offensive, not to mention President Xi’s consolidation of power, have intensified this sentiment. To help allay such concerns, the Trump administration should build on its ongoing efforts in the region by bringing in another critical set of partners—those in Europe. Stronger transatlantic coordination and cooperation in Asia could support U.S. efforts and, indeed, help influence China’s rise in constructive ways.

Europe is incredibly important to Asia, and vice versa. From an economic standpoint, the twenty-eight countries of the European Union constitute China’s largest trading partner and ASEAN’s third-largest. Europe is also the top destination for Chinese foreign-direct investment. Moreover, the Belt and Road Initiative—Xi’s signature foreign-policy undertaking—aims to connect the English Channel to the East China Sea, with China at the center. At the same time, many European states and firms justifiably have concerns about Chinese trade-and-investment practices that contravene international rules, such as steel dumping and holding market access hostage in order to compel technology transfers to Chinese firms. In this regard, they have common cause with the United States and a number of Asian powers.

Asia and Europe are also featuring more prominently in each side’s security calculations. While Europe continues to prioritize its backyard (Russia, the Mediterranean and the Middle East), Asia is far more than an afterthought even though 40 percent of European trade transits through the South China Sea. Because Europe has the world’s largest exclusive economic zone (EEZ), Europeans have a direct and substantial interest in preserving international law and peaceful dispute resolution through those waterways. Of more immediate concern, European capitals could soon find themselves within range of North Korean nuclear-tipped missiles. Given these dynamics, efforts are intensifying to increase security cooperation across Eurasia, including between the United Kingdom and Japan. Washington should applaud, encourage and facilitate Europe playing a more active role in Asia’s security.

Europe also can and should bear a greater share of diplomatic responsibility in advocating for universal values in Asia. Now more than ever, Asian champions of human rights and political and civil liberties will rely on diplomatic and financial support from Europe to project their voices in their region. European and Asian democracies will have to give each other strength to lead global efforts to defend human rights and fundamental freedoms, including at the United Nations and in other multilateral forums.

Asia is at an inflection point, with a rapidly rising China increasingly demonstrating its ambition to reassume its historic role as the region’s central actor. As China gains in material power and confidence, its sensitivity to external pushback is waning. This increases the importance of like-minded partners in Europe, the United States, and Asia coordinating to set clear boundaries on what is acceptable Chinese economic and strategic statecraft.

How can the United States and Europe do this in practice? At the most basic level, they need to increase prioritization on policy coordination on Asia. Managing China’s rise should be a standard agenda item at U.S. high-level engagements with European powers, including the G7 and U.S.-EU summits. Transatlantic leaders need to overcome the old maxim that “the urgent crowds out the important” and begin focusing on one of the defining strategic challenges of our time: ensuring that China’s rise undergirds—and does not undermine—the rules-based international order that both sides of the Atlantic have worked so hard to create and sustain. To support such efforts, policy communities in the United States and Europe should forge closer working ties to break down stovepipes and align assumptions. America’s Asia hands must learn how to maneuver through the admittedly complex EU system, both to advance common interests in the Asia-Pacific region and to avoid the kinds of coordination breakdowns that occurred during the formation of the Asian Infrastructure Investment Bank. Holding regular, sub-ministerial dialogues on Asia policy between the United States and leading European powers could help avert missteps, build shared understanding, and, over time, yield greater commonality of approach to the region.

Communication is crucial, but the United States and Europe must also turn words into action. The 2012 U.S.-EU ministerial joint statement on the Asia-Pacific region should be fleshed out and translated into a concrete action plan. In particular, the United States and Europe should better coordinate their economic and security assistance to ASEAN countries to avoid overlap of effort and resources. They should strengthen coordination and accountability measures inside and outside of multilateral forums, such as the World Trade Organization, to push back against unfair Chinese trade and investment practices. In the military realm, European countries with sufficient naval capacity should join (and the United States should solicit them for) presence and freedom of navigation operations in the South China Sea to reinforce the universal applicability of these principles. The United States and its Asian allies should also expand, as appropriate, European nations’ participation in key multilateral military exercises in the Indo-Pacific region, as well as contributions that European nations make to maritime capacity-building in Southeast Asia.

As the architects and guardians of the postwar, rules-based international order, the United States and Europe share a strong interest in ensuring that the current system evolves and adapts to the growing role of great and growing powers like China and India. The potential alternative—a breakdown in the postwar order and a return to spheres of influence, mercantilist economic competition, and great-power conflict—would expose U.S. and European vital interests to significant risks. Transatlantic cooperation is essential to ensuring that the global rules-based order continues to prevail in the wider Asia-Pacific region, that shared U.S. and European strategic interests are protected, and that peace and prosperity endure in Asia, the twenty-first century’s geopolitical and economic center of gravity.

Alex Pascal served as director for strategic planning on the National Security Council (NSC) staff at the White House and as Senior Policy Advisor to the U.S. Ambassador to the United Nations. Ryan Hass served as NSC Director for China, Taiwan, and Mongolia at the White House, and is currently a Rubenstein Fellow in the Foreign Policy Program at the Brookings Institution.