Trump and Bannon’s 'Pivot to Asia'? 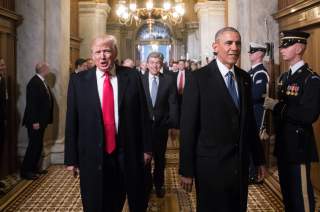 For all that has been made of the contrasts between President Donald Trump and former President Barack Obama, there are a number of similarities. For one, both were outsider presidents who inherited a remarkably similar portfolio in their first year: proliferation threats in North Korea and Iran, a flagging healthcare system, a somewhat undefined desire to end America’s permawar in the Middle East, and near-unprecedented partisan division and national unease about the U.S. economic future.  History will judge whether the fact that Trump has inherited a strikingly similar slate of challenges speaks poorly of Obama, or rather, attests to the long-term nature or even outright implacability of the challenges at hand.

But with President Trump’s National Security Strategy (set to be unveiled publicly from Washington Monday afternoon), a document dominated by discussion of East Asia—along with former White House Chief Strategist Steve Bannon’s machinations in Japan over the weekend—another similarity has emerged: is this the Trump administration’s “pivot to Asia”?

“No,” emphatically, insist some Trump allies, including former White House national security aide Sebastian Gorka, Bannon’s former lieutenant. “Incorrect to describe as a pivot,” Gorka told me by email Sunday. “It's not about a pivot. Or about Asia. It's about the Comprehensive Threat China poses,” he wrote.

Indeed, and to be sure, there are substantial differences between Trump and his predecessor.

A source close to Bannon told me Sunday the upcoming speech and the Strategy are “huge wins for 'the nationalist wing' of the White House.” The document “reads like a Peter Navarro ‘Powerpoint’!!!”

The reference is to Peter Navarro, the director of the White House National Trade Council. He is perhaps the administration’s eminent China hawk—but, like many aides, he was thought to be on the outs in recent months, symbolized perhaps most poignantly by his move from a White House office to a more humble station in the Executive Office Building.

But the NSS is a sign of a rebound for Navarro. And there can no mistaking that Navarro is a China hawk’s hawk. If you try emailing his old academic email—at the University of California, Irvine—your email provider will adjust the name of the recipient to “ComingChinaWars,” an apparent nod to one of his books.

Other works published by Navarro include titles such as, “Death by China.” The documentary (2012) version’s still-active website has emblazoned at the top: “‘DEATH BY CHINA is right on. This important documentary depicts our problem with China with facts, figures and insight. I urge you to see it.’—Donald Trump’”

The White House sought to relatively downplay how hostile the document is to China on a call with reporters late Sunday afternoon. But there can be no mistaking the rhetoric, which stands in stark contrast with the language of the Obama years: “We’re going to look with open and clear eyes at what competitors are doing, in terms of their investments—looking at reciprocity, or the lack of reciprocity, as well—and the ability of American companies to operate in other countries, as well,” a senior administration official relayed.

The president’s aides noted how important the president thinks the Strategy is: Trump’s team is purportedly delivering the document—legally required of the Executive branch—faster than any administration in recent memory. The White House noted the president’s decision to explain the Strategy in a live address to the American people Monday is also departure from how this has been handled in recent years. Trump cares about this.

Accordingly, if the National Security Strategy represents anything, it marks a potential choice by the president himself: at this juncture, he’s leaning toward getting tough on China, come hell or high water.

Trump was quite anti-China as a private citizen and presidential candidate. But that posture has been complicated by his apparently friendly relationship thus far with Chinese President Xi, and the integral role China must play in any serious North Korean denuclearization effort.

That’s why the Trump strategy has even some China hawks such as Harry J. Kazianis, director of defense studies at the Center for the National Interest, worried. Kazianis says National Security Advisor H. R. McMaster is a changed man—“hardcore anti-China now”—and argues the NSS is potentially misguided. McMaster made the rounds in Washington last week—including a discussion at the British think tank Policy Exchange last Tuesday—previewing the Strategy. It’s “super anti-China,” Kazianis says. “Why would they come out with this now when the Chinese’s help on North Korea? Really bad idea.”

Daniel McCarthy, editor at large at The American Conservative, disagrees. “Speaking in less than delicate terms about China as a competitor at the same time that we want China to pressure North Korea into behaving is sure to upset old foreign-policy hands,” he emails. “But Trump thrives in unpredictable environments, and the predictable course of sweet-talking China and hoping for the best with Pyongyang has always been naive.”

Another explanation, of course, is that President Donald Trump and his inner brass care less about North Korea than they let on. Bannon has urged the U.S. in recent months to direct its attention elsewhere. Containing China is the bigger prize.

Less than a week after Roy Moore’s defeat in Alabama, the NSS and Bannon’s weekend jaunt to Japan are much-needed victories. “We’re going through—for the next ten, or fifteen, or twenty years—the valley of decision,” Bannon told an audience on Saturday at Japan’s CPAC, put on by The American Conservative Union. Said Bannon: “You could argue, up until [Donald Trump] became president of the United States that America was a tributary state to China. We have a $500 billion—or $485 billion—annual trade deficit with China. . . . Essentially, the United States had been turned into Jamestown to China’s Great Britain, and that all the high value-added manufacturing had essentially been taken by China.”

Prime Minister Shinzo Abe’s “closest advisors and all Japanese media were all over it,” a source close to Bannon emails. “Japanese right wing loved the get tough approach.” Indeed, a greatly underrated factor in this administration has been the Trump relationship with the world’s third largest economy. After the shock November 8, 2016, Trump victory, Abe was practically the first world leader waiting in the lobby of Trump Tower in Manhattan. Major outlet the Japan Times ran with the story of Bannon’s Saturday address, giving it prominent placement (which was not ignored by Breitbart News; Bannon even hosted his radio show Sunday from Japan).

It doesn’t just stop at Japan, Bannon and allies close to the president, insist. China must be contained at all costs, and that effort must include “the Quad: USA, Japan, India and Australia.” Secretary of State Rex Tillerson has been proactive in building bridges with the nationalist-conservative government in India.

Not everyone is pleased with these developments. Neoconservative writer David Frum argues in The Atlantic that the McMaster NSS is “a national-security strategy devoid of values.” Indeed, the Trump administration document is a decided shift from the Obama approach. Only four years ago, then-Australian Prime Minister Kevin Rudd opined in Foreign Affairs that the “pivot” was needed to counteract China, decrying it’s “hard-line, realist view of international relations.”

Others are more receptive, however, including many of the intellectuals who originally supported Trump’s election. Julius Krein, editor of American Affairs, says the NSS is “at least an acknowledgement of the problem, which is better than nothing.”