Trump: Be Aware of the Iran Trap 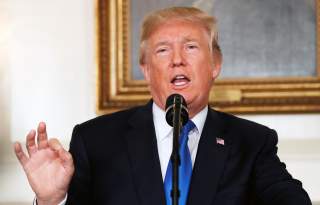 As the Islamic Republic enters its fortieth year in power, the Trump administration needs to pay heed to the perils of hubris in its policy towards Iran. There is no silver bullet for gaining the upper hand with Iran, and American presidents have a poor track record in trying. While the reasons for failure are unique to each president, there has been a pattern of overestimating the utility of using threats of force to influence Iranian behavior, and underestimating Iran’s will and capacity to resist.

Jimmy Carter tried to end the Iran hostage crisis shortly after the Iranian revolution in 1979 with a daring and misguided rescue attempt, leading to a failed mission and a presidential electoral defeat in 1980. Under Ronald Reagan’s watch the Iran-Contra affair cast a pall over what at the time was perceived to be his administration’s overall effective foreign-policy record. Bill Clinton imposed the most severe sanctions on Iran in the hope to extract concessions, only to be left disappointed.

George W. Bush unwittingly handed Iran a strategic gift by invading Iraq and dismantling the Saddam regime in Baghdad, giving Iran an opportunity to project power into Iraq and the broader Arab world. While Barack Obama landed a landmark nuclear deal in 2015 that successfully avoided a military showdown with Iran, it is unclear whether even he, who had a more nuanced view of the Islamic Republic, fundamentally broke the stalemate between the two countries.

For Trump, Less Is More

For Trump, two key factors about present-day Iran should not be overlooked: that the country’s population is exhausted by Tehran’s costly power play in the Middle East, and that Iranian hardliners (in partnership with Russia) can still do much to undermine American interests in the region.

To avoid falling into the same trap as many of his predecessors, Trump needs to compartmentalize his Iran policy much better. He needs to maintain the nuclear deal negotiated by the Obama administration, and dial back the bombastic—and often self-defeating—rhetoric. Failure to change course will only play into the hands of the hardliners in Iran, and move Tehran and Moscow closer together, producing an unfavorable scenario for U.S. interests in the Middle East.

This isn’t to suggest that Trump go soft on Iran. The goal of working with our allies to make Iran’s projection of power into the Arab world costlier for the regime makes sense for the United States.

But given the current environment with Iran, less is more. If Trump just avoids wriggling out of the nuclear deal and tones down the threatening rhetoric, he has the opportunity to be luckier than those who preceded him, possibly nudging Iran, and its patron Russia, towards a more constructive regional role. If, on the other hand, he lives up to his threats and unilaterally renounces the nuclear deal later this year, he will undermine this possibility, and possibly even give the hardliners in Tehran the cover story they need to crush Iranians pushing for positive change.

In a strange twist of fate, Trump, who derided the nuclear pact as the worst deal ever, potentially has more to gain from it than did Obama. First, for the same reasons Trump uses to disavow the deal, he could benefit from it. Trump claims that the deal is too narrow and doesn’t prevent Iran from pursuing its forward-leaning regional agenda.

But the good news seldom discussed publicly by the Trump administration is that the narrowness of the deal also plays to the advantage of the United States. Under the deal, the United States gains both a nuclear limited Iran and full flexibility to resist Iran’s regional agenda, should it choose to do so.

If Washington walks away from the nuclear deal, which was a diplomatic salve by the Obama administration to a looming military crisis, Iran is the one who gains the benefits of flexibility. Under this scenario, Iran would pay no diplomatic price by opposing the United States. Trump would be branded the rogue actor by having walked out of a multilateral diplomatic agreement to which Washington was a signatory.

Second, staying in the nuclear deal leaves open the possibility that Russia could ultimately act as an arbiter and possible restraint on Iran’s regional ambitions, particularly now that Russia’s goal of securing Assad’s hold on power in Syria has been attained. With its goal of tipping the balance towards Assad achieved, Moscow has an interest in stabilizing Syria and cementing its own role as kingmaker in the Middle East. While Russia, like Iran, aspires to push back against what is perceived to be U.S. hegemony in the Middle East, Moscow can’t completely disregard Washington’s interests either. But if the United States breaks the deal, Moscow has an incentive to paint the Americans as having gone rogue, and disregard U.S. concerns about Iran.

Today, the conventional mainstream wisdom in Tehran is that Trump’s bombast and threats about disavowing the nuclear give Moscow all the excuses it needs to work to pit Iran against the West, and particularly the United States. This would only strengthen the position of the hardliners in the Revolutionary Guard and its expeditionary Quds Force.

In short, if the United States is on the outside of the nuclear deal looking in, then Russia is likely to reinforce Iran’s current behavior, joining forces with Tehran as a two-headed revisionist power pushing against U.S. interests in the region. This could lead to greater aggression on the part of Iran, and reduced leverage for the United States.

Third, the hardliners in Iran—who happen to be in control of Iran’s controversial interventions in places such as Syria and Iraq—will have even more reason to move closer to the Russians. Closing ranks with Moscow will give the fanatical voices in the Revolutionary Guards fodder for further intransigence at home and abroad, aimed at undermining U.S. interests.

Fourth, by staying in the deal and dialing back the fiery rhetoric, Trump would also deprive the Iranian regime of the ability to brand the protesters in the recent civil unrest in Iran as lackeys of the United States, a tack normally taken by the hardliners in Tehran. Without U.S. provocation, today’s deep anti-regime sentiment found in Iran might just open up political space for a reprioritization of the regime’s assertive regional agenda and its anti-Americanism.

The Iranian leaders, from the seventy-eight-year-old hardline Supreme Leader Ayatollah Ali Khamenei to the milder President Hassan Rouhani, agree that the regime is at a generational and ideological crossroad. Political and economic circumstances in Iran have changed for the worst, with the mass protests in some one hundred Iranian towns as testimony to this reality. The economic costs of the regime’s regional agenda and its anti-Americanism—borne disproportionately by average Iranians, who desperately want to reconnect to the global system—is seen as unsustainable. The tired jabs at America are starting to ring hollow. And ordinary Iranians want more jobs and less involvement in Syria, Iraq, Lebanon or Yemen.

If Trump betrays the nuclear deal and Nikki Haley, Trump’s U.S. ambassador to the United Nations, continues her threats, this becomes a cover story the Iranian hardliners need to ignore the legitimate grievances of their repressed people.

Last, on the U.S. domestic front, Trump can accept the nuclear deal without incurring any of the political perils of authorship. He can find a way to grudgingly accept being bound by the deal, as presidents often do when they inherit what they believe are unsavory legacy deals from their predecessors, without being branded as being soft on Iran.

This is why the Trump administration’s ongoing haggle with the Europeans about what to do with Iran in the next few weeks—leading up to the May 12 self-imposed Trump deadline—is so important. The Europeans know Trump really has no good Plan B to the 2015 nuclear agreement. And yet they recognize American continued adherence to the deal is needed to solidify the agreement’s prospects. If the United States and the Europeans can agree on supplemental provisions to add to the 2015 nuclear agreement they will have a better shot at gaining Tehran’s attention. But America needs to work constructively with the Europeans on this and abandon its own mulishness. For example, to ask the Europeans to ignore their commercial interests in Iran—as H. R. McMaster did at the Munich Security Conference—will not help forge a new U.S.-European platform on Iran.

Skeptics in Washington of a more nuanced policy towards Iran say the current regime in Tehran is unlikely to moderate, no matter what the United States does. In this line of thinking, Tehran is irredeemable in terms of being responsive to its people and being a constructive stakeholder in what has become a crumbling Middle East regional order. Under this logic, hardball policies have a greater shot at containing Iran than what was seen as the appeasement of the Obama years. While the skeptics have valid points about the difficulty of nudging Iran diplomatically, the risk is higher that Iran will be successful in working against U.S. interests if Trump unilaterally renounces the nuclear deal and continues brandishing threats.