Trump Brings His Agenda to Congress 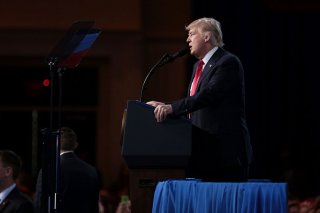 The key word in Donald Trump’s joint address to Congress was “citizens.” The president reiterated what he told conservative activists at CPAC days earlier: “My job is not to represent the world. My job is to represent the United States of America.” This is a president who puts the historic nation-state at the center of all his policies.

He’s not the first to do so, but he is the first in many years. He cited two other Republican presidents in his remarks, both of whom suggest how Trump sees his mission. He invoked Abraham Lincoln on the importance policies that support American industry. And he referenced Dwight Eisenhower as a model of infrastructure investment, for the creation of the interstate highway system. Donald Trump’s economic nationalism is not in the least unexampled, either in American history or the history of the Republican Party.

The president was firm in his demands, even as he conceded to some of the formalities of the joint address to Congress (or, in other years, the State of the Union address). He had given his inaugural address with his suit jacket open and signature red tie hanging low. For his address to Congress, he was dressed sharply, with a blue-and-white striped tie. He delivered his remarks in measured tones, with hardly an ad lib, and eschewed the fiery rhetoric of the inaugural. He did not employ any language quite as shocking to Washington sensibilities as “America First” or “American carnage.”

But if Trump made concessions to establishment expectations in the way he looked and sounded, he did not dilute the substance of his message in the slightest. Not only did he insist he would curtail illegal immigration, but he also called for reforming the legal immigration process to be merit-based, as it is in most other countries. The president not only stayed true to his economic nationalism in his remarks, but he also touted greater government spending on infrastructure, paid family leave and childcare support for working families—themes that earned him applause from Democrats, including Bernie Sanders. As president, no less than as a candidate, Trump is unconstrained by ideological orthodoxy. House Speaker Paul Ryan stood and clapped for the president, but Trump’s Republican Party is profoundly different from the one that Ryan once aspired to lead, even if repealing Obamacare remains an article of faith.

Trump stayed on message with regard to his foreign policy as well. Even as he reassured allies of his support for NATO, he demanded that they pay their fare share to support it and shoulder more of the burden in military operations. He spoke again of destroying ISIS while emphasizing the role of Middle Eastern partners in that project. He highlighted new sanctions he has placed on Iran and called America’s relationship with Israel an “unbreakable” alliance. Yet he also referred to the “approximately $6 trillion” that America has spent in the Middle East that should have been spent at home instead. President Trump did not invoke Ronald Reagan as he did Lincoln and Eisenhower, but his plan to increase the military budget significantly, without proposing to fight new wars of the sort that George W. Bush engaged in, suggests he takes Reagan as a model—a model, that is, of a president whose Pentagon expenditures do not portend greater interventionism.

As he has done before, President Trump alluded to creating safe zones for refugees from war-torn countries, though he gave no details as to how, or where, such zones would be created. Those who suspect that Trump will be drawn into further land wars, whether he wishes to be or not, can point to this objective as one that might require substantial American forces on the ground in the Middle East. Against this interpretation, however, is the obvious priority that Trump places on his domestic agenda. His joint address left no doubt that immigration and trade are exactly as high on his timetable as his campaign led voters to believe.

If Democrats could applaud Trump’s proposals for family leave and child care, they nonetheless heard much else to which they could object. The president made school choice a powerful component of his remarks. And he emphasized the benefits that school choice would provide to African American and Hispanic children. He had a young black woman in attendance, Denisha Merriweather, whom he pointed to as proof of the policy’s success. She escaped from a failing school, improved her grades, and became the first member of her family to attend college, thanks to choice that education reform had afforded her.

Also in attendance was Carryn Owens, widow of Ryan Owens, the Navy SEAL who died in Yemen in the first antiterrorist operation Trump had authorized. Mrs. Owens received an extended ovation in honor of her husband, who became a symbol of Trump’s focus on the military and veterans. Along with the armed services, Trump also praised the men and women of law enforcement. Strength and order are great themes of President Trump’s rhetoric and proposals—along with the idea of honoring and taking care of servicemembers and their families. All presidents salute the military, but Trump incorporates the expected praise into his wider vision of American greatness.

There is a sharp contrast here between the way his critics see him and the role President Trump envisions himself fulfilling. To his opponents, he is simply unfit for office, an entertainer who somehow has been elected to the highest office in the land. He’s temperamentally unsuited to his task, they believe, ideologically authoritarian, and perhaps even psychologically unstable. Yet there is nothing remotely crazy, un-American, or historically unusual about the themes of national interest (in economics as well as foreign affairs) and citizenship that Trump enunciates. By the traditional canons of national strength and integrity, it’s the global liberalism of Trump’s opponents, Republicans as well as Democrats, that is revolutionary and reckless. The records of the last two presidents speak for themselves. And while President Trump faces daunting odds in domestic politics, in looking to Lincoln and Eisenhower—and yes, perhaps Reagan too—he has chosen models of prudence.