Trump Can Learn From Morgenthau's 6 Principles of Political Realism 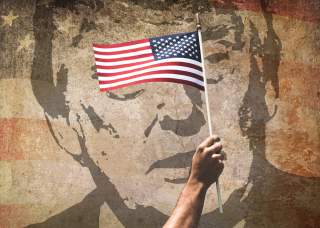 Hans Morgenthau was a leading postwar intellectual of political realism in the international relations discipline and, at times, an outspoken critic of U.S. foreign policy. In his 1949 article, “The Primacy of the National Interest,” Morgenthau criticized the Truman Doctrine for placing universal moral principles (e.g., the promotion of freedom and democracy) above the national interest as the standard for U.S. foreign policy, and in the 1960s he became a vocal opponent of the Vietnam War. Following Morgenthau’s legacy of dissent on U.S. foreign policy, a group of international relations scholars (including prominent realists) in the U.S. academy published a piece in the New York Times in September 2002, warning the U.S. government that war against Iraq would not be in the national interest. While a clear “Trump Doctrine” is yet to materialize, the foreign-policy inclinations of the new administration are detectable from President Trump’s campaign rhetoric and his first weeks in the White House. What might Morgenthau have to say about the administration’s emerging foreign policy?

Many of Morgenthau’s core insights about foreign policy and international politics are captured in his six principles of political realism, found in his seminal work Politics Among Nations. The second, fourth and fifth principles are of particular relevance to the current administration. Morgenthau’s second principle states that “the main signpost that helps political realism to find its way through the landscape of international politics is the concept of interest defined as power.” Morgenthau believed that international politics is fundamentally a struggle for power (understood in terms of the mutual relations of political control between nation-states), and that peace is often tenuous in a world lacking a sovereign authority that can protect the interests and survival of individual states (an insight that has been codified in the neorealist conception of “international anarchy”). As a result, the “national interest” is primarily concerned with the resources (especially military and economic capabilities) and limitations (primarily the balance of power) that determine the national power of the state in international politics.

The fourth principle states that “political realism is aware of the moral significance of political action, but maintains that moral principles cannot be applied to the actions of states in their abstract universal formulation.” Morgenthau did not reject ethical considerations in foreign policy (as is clear from his criticisms of the Vietnam War), but believed that political prudence (i.e., the practical consideration of the consequences of foreign policy) requires that moral principles be “filtered” through the “concrete circumstances” of power politics. Moral ends should be pursued to the extent that they are within the limits of national power and are consistent with national interests. The fifth principle takes this one step further by stating that “political realism refuses to identify the moral aspirations of a particular nation with the moral laws that govern the universe.” Morgenthau cautioned against the dangers of national “exceptionalism,” which can lead to “political folly,” such as the fighting of wars that do nothing to advance or protect the national interest, and can cause unnecessary human suffering through “moral excess.” Thus, “moderation in policies cannot fail to reflect the moderation of moral judgment.”

What wisdom does this offer to the new administration? The first thing that the current administration needs to recognize is how much the international “status quo” favors the United States. The most important structural feature of the contemporary “unipolar” international system is the United States’ preponderance in military and economic capabilities. The United States also benefits politically (and economically) from its leadership position in international institutions (e.g., the United Nations Security Council, the International Monetary Fund, the World Bank and the World Trade Organization) and strategically from its global alliance system, which is the biggest in world history. The political reality of U.S. hegemony in international politics reveals the irony behind President Trump’s campaign slogan “make America great again,” at least from the perspective of U.S. foreign policy. The United States is the world’s only great power and therefore its geopolitical position could hardly be better.

Based on the conception of interest defined in terms of power, the fundamental aim of U.S. foreign policy should be to maintain U.S. hegemony in international politics. Yet, far from seeking to uphold the status quo, the current administration is acting like a revisionist state. Its “America first” rhetoric is not just nonsensical (as if the U.S. government would put its interests second), but that rhetoric actually threatens U.S. national interests by eroding the confidence of America’s allies and giving fodder to its enemies. In a remarkably foolish foreign-policy shift, President Trump has criticized the country’s treaty allies for not paying their “fair share” of collective defense, and has warmed up to one adversary—Russia—that is bent on putting an end to U.S. hegemony.

President Trump criticized the Obama administration for getting outplayed and outsmarted by Russian president Vladimir Putin, and yet he seems to be falling into the same trap as Obama by thinking that he can do better vis-à-vis Russia through diplomatic rapprochement. The problem is to see U.S. foreign-policy challenges with respect to Russia in terms of misunderstandings between political leaders and administrations, rather than the fundamental differences between United States and Russian national interests. Russia seeks to increase its power and sphere of influence while the United States aims to maintain hegemony. If the current administration seeks rapprochement by making concessions to Russia (e.g., by rolling back sanctions), then foreign-policy analysts will soon be writing about another failed “reset.” On China, Trump broke with diplomatic precedent by accepting a phone call from Taiwanese president Tsai Ing-wen, which called into question the United States’ commitment to a “One China” policy. The problem here is for foreign policy to extend beyond power, since the military balance within the first island chain—and specifically in a Taiwan war—is rapidly shifting in China’s favor. While realism suggests that geopolitical rivalry between China and the United States is inevitable, interest as power would suggest that picking a fight with China over Taiwan is not a prudent course for U.S. foreign policy.

The mercurial nature of President Trump’s pronouncements on matters of foreign policy have caused uncertainty and anxiety in the capitals of U.S. allies, from Berlin to Seoul. This uncertainty is a direct threat to U.S. power since the alliance system, which gives it global political influence and military power projection, is based on the credibility of U.S. security guarantees. While the current administration may view the U.S. global alliance system in economic terms (e.g., high overhead costs and too many free riders), the reality is that it is central to the political and military pillars of U.S. hegemony. It is also the key to the containment of potential great-power rivals, Russia and China. So far Russian and Chinese efforts to produce a global counterbalance to the United States by forcefully revising the regional balances of power in Europe and East Asia have catalyzed countervailing efforts to contain them by strengthening the U.S. alliance system.

While diplomacy aimed at increasing the defense expenditures of allies is a prudent course for U.S. foreign policy, this must not take precedent over a strong and credible commitment to the defense of its allies. After all, the United States still outspends the next ten biggest spenders combined, with military expenditures of $597.5 billion in 2016. How much does Latvia’s $350 million (up from $238 million in 2015) really matter? The current administration needs to recognize that the U.S. global alliance system is not based on a narrow ideological commitment to democracy and liberal values; nor should it be reduced to an economic question of burden sharing. The maintenance of the alliance system is central to a foreign policy that aims to maintain the United States’ geopolitical preeminence and contain the emergence of rival great powers in Europe or East Asia, which has been central to U.S. grand strategy since World War II.

On nuclear weapons, President Trump said in a social media post that “the United States must greatly strengthen and expand its nuclear capability until such time as the world comes to its senses regarding nukes,” appearing not to grasp the strategic effects of U.S. nuclear intentions and capabilities on other nuclear states. He declared in a press interview, “Let it be an arms race. We will outmatch them at every pass and outlast them all.” Furthermore, in spectacular ignorance of the nuclear nonproliferation regime—the maintenance of which is a vital U.S. national interest—the president actually suggested that countries such as Japan, South Korea and Saudi Arabia might be better off with their own nuclear weapons. What the administration fails to comprehend is that there are no “winners” when it comes to nuclear weapons (or nuclear wars). A nuclear arms race between the United States and Russia or China is not in the U.S. national interest (because there is nothing to gain beyond deterrence), and could actually increase the risk of deterrence failure (and the unthinkable outcome of nuclear war). As Morgenthau wrote, “history shows, if history shows anything, that all nations have been governed at times by fools and knaves, and even a combination of both. That was bad enough before nuclear weapons existed. But imagine a fool or a knave or a combination of both in the possession of nuclear weapons, and nuclear war becomes unavoidable. So it is the almost inevitable danger of actual nuclear war, inherent in the dynamism of a generalized unlimited nuclear arms race, that makes nuclear arms control and in the end nuclear disarmament a question of life or death for all mankind.” The fierce importance of his words may be truer today than ever before.