Trump Can't Win a Trade War Against Everyone 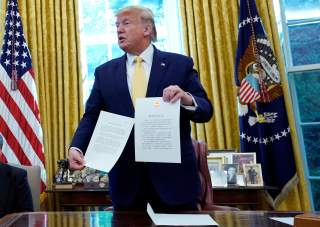 Despite recent media speculation over a ceasefire in the trade war with China, U.S. tariffs are still scheduled to increase in less than a month from now. But it’s a useless endeavor, because it’s not accomplishing its goal if changing China’s unfair and dangerous trade practices. In fact, it’s just hurting Americans—the trade war with China is on track to kill nearly one million American jobs by 2020.

The reality is President Donald Trump can’t make China change by himself, never mind if he loses reelection in 2020 due to a trade war-recession. So, Trump needs a better plan. He needs to end the trade war with China and drop his tariffs on American allies in exchange for more pressure on China.

It’s no secret that American workers are doing better today than they were when President Trump took office. In fact, wages are growing faster, and unemployment is near an all-time low. But not everything is good news. America’s economy is slowing down, the stock market is increasingly volatile, and it’s impossible to ignore the warning signs of a coming recession. The interest rate on long-term bonds is now below that on short-term bonds—a situation that has preceded every recession since World War II.

The tariffs are to blame for the slowdown. After all, China is America's primary trading partner, and Washington slapped them with tariffs ranging from 5 percent to 25 percent on nearly everything the United States imports from them. And if that wasn’t enough, Trump has also imposed tariffs on 14 percent  of Indian imports. Moreover, Washington’s tariffs also impact all washing machine imports and most aluminum and steel imports, including those from the European Union.

Trump’s logic behind the Chinese tariffs is understandable. He’s trying to force them into curbing practices like the stealing American intellectual property, and spying on Americans for commercial and political purposes.

But why enact tariffs against allies like the EU? Trump justifies tariffs as a negotiating tool to get others to lower their own tariffs as well as “a powerful way to get companies to come back to the USA.” But this strategy has failed on both counts. China, the EU, and India have not lowered their tariffs, they’ve raised them. Furthermore, his trade war is destroying steel industry jobs and costing Americans billions of dollars in higher prices.

All the while China isn’t budging, no matter how often they tease negotiation. In fact, Beijing is targeting Trump’s electoral base with their tariffs so the President loses the 2020 election in favor of a Democrat with a softer stance on China.

Trump needs to change course to keep the economy booming and to improve his reelection chances. This means dropping the tariffs he imposed on China and, instead, resuming the U.S. complaint against China in the World Trade Organization (WTO) for its theft of intellectual property. Additionally, Washington should file as many more complaints as necessary.

The WTO would attempt to settle the dispute and, if there’s no agreement, it would appoint a panel whose members are agreed upon by all parties. Nearly two-thirds of disputes don’t even end up needing a panel. If this one does, then the panel would ultimately issue a ruling with a set of recommendations for China.

China will implement WTO recommendations for two reasons. First, a WTO ruling allows Chinese leaders to save face by showing they didn’t cave to America. Second, if all else fails, the panel can authorize sanctions against China. This is why America should increase the stakes on China by rallying its main allies such as Australia, Canada, the EU, India, Japan, and others to join this legal complaint. Together with America, these nations account for approximately half of all Chinese foreign trade, a share that Beijing won’t ignore.

Trump will have to negotiate with these allies to get them to join America’s complaint. His first step should be to drop his recent tariffs on them, and ask for their support by lowering previously-existing tariffs.

This plan has a better chance of working to change China’s behavior, and it would make Americans better off. Lifting the tariffs imposed on China alone could further reduce the unemployment rate in America to less than 3 percent by the end of 2020, and doing the same on American allies would fuel America’s economy even more.

Trump will need to exercise his bragged negotiation skills to get allies to join in standing up to China, but he will also need to show constraint in dealing with allies. This is because creating a united front against China’s trade practices will not be easy or quick. If it fails, at least ending the trade war will have helped America’s economy and got him reelected in 2020. And if China complies with the WTO ruling, it would be the biggest victory for free trade and American trade policy in decades.