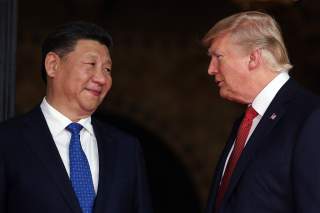 Donald Trump’s administration is gradually losing patience with China. Over the past week, it adopted a new and more confrontational posture towards Beijing, including possible tariffs on steel. These moves mark a reversal from the president’s earlier approach to China, which sought to recruit the People’s Republic as a partner in solving regional issues, most notably on North Korea.

As a candidate, Trump took a critical tone on China. Speaking about America’s trade deficit with the country at a May 2016 rally in Indiana, the New York billionaire declared, “We can’t continue to allow China to rape our country.” Throughout the election season, he promised to outmaneuver Beijing if elected. “You can win against China if you're smart,” he told a South Carolina audience in July 2015.

Upon taking office, however, Trump appeared to prefer collaboration over confrontation with Beijing. After meeting with the Chinese president at Mar-a-Lago in early April, Trump expressed optimism about finding common on North Korea and trade. Beyond positive words, the president backed away from some of his tougher campaign proposals in order to cultivate China. He decided against labeling the People’s Republic a currency manipulator, citing the need to gain its support on North Korea.

However, relying on China to make major headway in North Korea was always a long shot. The Chinese are reluctant to put any real pressure on North Korea since they have a strategic stake in the survival of the regime. Eric Gomez, a Cato Institute defense and foreign policy studies analyst, says, “North Korea is a nice physical buffer between U.S. forces based in South Korea and China’s border.” This security interest restrains China’s willingness to do anything that may lead to the collapse or destabilization of the state.

Moreover, even if that were not the case, China does not possess the leverage over North Korea that Trump appears to believe it possesses. Gomez asserts, “China’s ability to peacefully guide Kim Jong-un towards a position of acceptance with the United States is greatly overrated.” He points to the 2013 execution of Jong Sang Thaek, Kim Jong-un’s pro-Beijing uncle, as evidence of North Korea recalcitrance towards its biggest benefactor. In the Chinese calculus, arm-twisting could potentially backfire, prompting the hermit kingdom to go completely rogue.

When China failed to live up to the Trump administration’s hopes on North Korea, the president and his team did not hide their frustration. Following Otto Warmbier’s death, Trump tweeted his disappointment about China’s assistance on North Korea on June 20. The next day, Secretary of State Rex Tillerson expressed a similar sentiment as his boss, telling the press that China has “a diplomatic responsibility to exert much greater economic and diplomatic pressure on the regime if they want to prevent further escalation in the region.”

Along with censure, Trump’s cabinet has taken some steps that will undoubtedly ruffle some feathers in Beijing. Yesterday, the Treasury Department instituted sanctions against a Chinese company and two citizens of the Peoples’ Republic for their connections to North Korea. Additionally, the Treasury’s Financial Crimes Enforcement Network called for a Chinese bank, which reportedly assisted North Korea acquiring international funds, to be penalized. This move comes on the heels of a State Department report that downgrades China over its failure to combat human trafficking and references its usage of North Korean laborers as a big factor in the decision.

More broadly, this administration is following its predecessors’ footsteps by strengthening ties with China’s regional rivals. Prior the Trump’s meeting with Narendra Modi, his team agreed to approve the sale of twenty-two Guardian MQ-9B drones to India, thereby better enabling it to monitor China’s moves in the Indian Ocean. In a move that is infuriating Beijing, the Trump administration gave its blessing to $1.4 billion arms deal for Taiwan.

However, Trump’s recent geopolitical maneuvers have not been restricted to arms sales. At the recent joint press conference with Modi, Trump emphasized America’s participation in the Malabar naval exercise with Japan and India and, echoing Secretary of State Rex Tillerson, said that the era of strategic patience is over. David Brewster, Senior Research Fellow with the National Security College at Australian National University, says that the naval exercise represents “great practical and symbolic importance for the growing alignment between those three countries.” While he stresses that the Malabar exercise is not an “exercise in containment,” he warns that the more China “tries to undermine the rule based order the more it brings these countries together.”

At the same time, Trump has not abandoned all hope for cooperation with China. As recently as a June 22 meeting with Chinese State Councilor Yang Jiechi, he expressed an interest in working with China on its One Belt One Road Initiative. For a president who has changed his approach to China once before, it is not inconceivable that he will do so again. For now, however, a newly assertive tone is not only being enunciated but also followed by the Trump administration.