Trump Delivers on His Promise to Tank the Iran Deal. Now What? 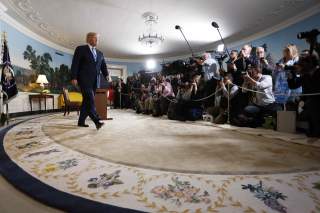 President Donald Trump had a stern, concerned look on his face when he stepped up to the lectern to deliver what was perhaps the most significant foreign policy decision of his presidency thus far. He wanted to send a clear, powerful and unambiguous message to the Iranian government and to the officials from the previous U.S. administration that spent years negotiating the Joint Comprehensive Plan of Action (JCPOA), an agreement the current president blasted as “was one of the worst and most one-sided transactions the United States has ever entered into.” The message could not have been any more straightforward: unlike previous presidents who make promises and fail to uphold them, Donald Trump makes and actually delivers them.

None of us should be surprised about Trump’s decision to withdraw the United States from the Iranian nuclear deal. Anyone paying even the slightest bit of attention to this issue could easily see Trump’s animus, disgust and hatred for the JCPOA. During the first few months of his presidential campaign, at the same time when the U.S. Senate was debating the nuclear accord, Trump proudly participated in an anti-deal rally on Capitol Hill. In his typical brash manner, the then New York real-estate tycoon commented that he had “never seen something so incompetently negotiated—and I mean never.” His remarks didn’t get any better as the campaign wore on; Trump excoriated former Secretary of State John Kerry for giving away the store and being railroaded by Iranian negotiators, referring to him as a “baby” who didn’t know what he was doing in a room-full of adults. And as Commander-in-Chief, Trump stuck the dagger in the agreement in both word and deed. “The fact is that this was a horrible, one sided deal that should have never, ever been made,” Trump said. "It didn’t bring calm. It didn’t bring peace. And it never will.”

The big question looming over the Trump administration’s discussions about the Iranian nuclear agreement was never about whether the president would pull out. Indeed, if the most optimistic among us thought for a moment that the White House would provide the Europeans with a little more time to finalize a better package with tougher terms on IAEA inspections, Tehran’s ballistic missile program, and the JCPOA’s sunset provisions. They were disappointed as soon as Trump opened his mouth. Notwithstanding the valiant attempt by Brian Hook, the State Department’s planning chief, to brainstorm with the Europeans in order to come up with a good-enough consensus that he could present to Trump, the address that was delivered today was all the evidence one needed that the president was not at all interested in a compromise. Trump’s approach to negotiation is literally “my way or the highway;” if you don’t cave and give me everything I want, then I’m walking away and punishing you. These hard-line tactics may work when your opponent is a small business owner looking to move into your building, but it is rarely effective with adversaries that take pride in resisting western dictates. And there is no country more in-tune with that description than the Islamic Republic of Iran.

With Washington now out of the JCPOA, where does this leave the United States in relation to its European allies? And what exactly is the Trump administration’s Plan B?

Transatlantic relations are already shaky for a variety of reasons, but Trump’s decision to leave the nuclear deal will only make the relationship harder to manage. To be fair, the relationship between the Americans and Europeans is not going anywhere; there are still a multitude of foreign policy issues that bond Washington, London, Paris, Berlin and Brussels together, from mopping up the remnants of the Islamic State to ensuring that the North Korean nuclear issue is resolved peacefully. Yet French President Emmanuel Macron, U.K. Prime Minister Theresa May and German Chancellor Angela Merkel will not appreciate Donald Trump discarding the months of painstaking diplomacy European diplomats engaged in. By withdrawing from the agreement and re-enacting U.S. sanctions on the Iranian economy, Trump has thrown more sand in the transatlantic gears at a time when many on the other side of the Atlantic—rightly or wrongly—view Trump with trepidation.

Just as concerning is that the administration does not appear to have a strategy or a backup plan in a post–JCPOA world. If Plan A was maintaining America’s participation in the JCPOA and continuing to hold the Iranians to account through an extensive network of IAEA verification and monitoring, Plan B apparently consists of sanctioning the Iranian regime so hard that they come crawling back to the negotiating table, hat in hand. Trump was confident that the resumption of U.S. secondary sanctions on Tehran’s oil, banking and financial sectors will force Iran’s leaders rip up their nuclear infrastructure, root and branch, as the only remedy for some economic relief. But, given Trump’s decision, why would Supreme Leader Ayatollah Ali Khamenei—a man who has a demonic view of America to begin with—allow Iranian officials to ever negotiate with the United States on anything ever again? That question was left unanswered.

The Iran hawks circling Washington will write op-ed’s praising Donald Trump’s announcement today as a bold and courageous move by a Commander-in-Chief who will no longer settle for terrible multilateral agreements. The rest of us will see this decision for what it is: a brand new international security crisis self-imposed by the United States that could very well get worse before it gets better.

Image: U.S. President Donald Trump departs after announcing his intent to withdraw from the JCPOA Iran nuclear agreement in the Diplomatic Room at the White House in Washington, U.S., May 8, 2018. REUTERS/Jonathan Ernst​