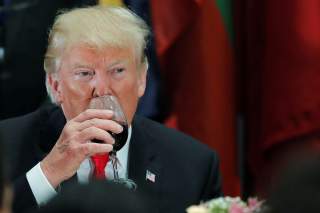 On substance, Donald Trump’s second address to the United Nations General Assembly as president Tuesday didn’t disappoint. Critics attacked Trump’s sleepy presentation, and a laughter-inducing gaffe about his own presidential performance threatens to be long remembered. But the gravamen of the speech thrilled much of the president’s hardline base.

The prose itself was redolent of his chief speechwriter, Stephen Miller.

“Inside everyone in his great chamber today . . . there is the heart of a patriot that feels the same powerful love for your nation, the same intense loyalty to your homeland, the passion that burns in the hearts of patriots and the souls of nations has inspired reform and revolution, sacrifice, and selflessness, scientific breakthroughs and magnificent works of art,” Trump said.

“Our task is not to erase it, but to embrace it, to build with it, to draw on its ancient wisdom and to find within it the will to make our nations greater, our regions safer, and the world better,” Trump said.

At the core, however, the speech was not so much Bannonite or Millerist. It was Boltonite.

“We withdrew from the Human Rights Council,” Trump reminded the room. “The United States will provide no support and recognition for the International Criminal Court. As far as we are concerned the ICC has no legitimacy or authority. . . . America is governed by Americans.” Nothing encapsulates John Bolton’s views better than these statements.

Trump launched broadsides on four fronts: Iran, China, Russia and Venezuela. His remarks were surely music to the ears to his core hawkish troika in attendance—Secretary of State Mike Pompeo, U.N. Ambassador Nikki Haley and Bolton. Trump’s national security advisor returned to New York this week during the week of the GA. It is his first trip back as a government official after a scorched-earth tenure in Haley’s role a decade ago. All indications of late are that Haley is following in Bolton’s footsteps.

Trump’s remarks were emblematic of an administration that, on policy, is fairly hawkish. Many expected Donald Trump’s tenure to be isolationist. Wrong. He has proved more nationalist than non-interventionist. And it’s why his tenure has been such a prime opportunity for Bolton, always a nationalist outlier in the internationalist, neoconservative George W. Bush administration. “That is one reason the United States will not participate in the new global compact on migration. Migration should not be governed by an international body, unaccountable to our own citizens,” Trump stated on Tuesday.

Critics of the Trump-Bolton vision claim the administration picks its spots, while abandoning traditional U.S. support for liberal democracy, even rhetorically. Trump praised India, Israel, Saudi Arabia and Poland on Tuesday; detractors argue those nations have followed a path of “illiberal democracy” in recent years. “There is Saudi Arabia where the king and crown prince are pursuing bold new reforms. There is Israel proudly celebrating its 70th anniversary as a thriving democracy in the holy land. In Poland the great people are standing up for their independence, their security, and their sovereignty,” Trump said. “There is India, a free society (of) over a billion people, successfully lifting countless millions out of poverty and into the middle class.”

“Congrats, India. You’re now lumped alongside Saudi Arabia, Israel and Poland as a would-be Trump friend,” said Ishaan Tharoor of the Washington Post. Defenders of the president’s tact claim the emphasis on Trump’s nationalist notes serve to occlude the essence of Tuesday’s address. “Trump UN speech was not ultra-nationalist,” said Jordan Schachtel of Conservative Review. “Patriotism is a unifying force that leads to respect among nations. US not walling off, but advocating for realism, [respecting] sovereignty [and] protecting world order.”

“Sovereignty” was the key word for the Heritage Foundation. “The President stood up for U.S. interests, and made it clear that America will protect its sovereignty, its borders and its friends,” said Nile Gardiner of Heritage.

Robert Kagan insists in the New York Times that “America First” has won. But it’s also true this is an administration pursuing regime change—or near-regime change policies—against two rogue actors—Iran and Venezuelawhile pursuing a hawkish policy line on Russia, China and Assad’s Syria. It would seem the administration is picking its enemies a la carte.

An exception is North Korea, where the administration continues to operate on two tracks. Trump is sometimes outright laudatory of leader Kim Jong-un, while his hawkish troika of Pompeo, Haley and Bolton deploy more bellicose language. It might not matter. All indications are that Pompeo will be flying back to Pyongyang for more talks soon.

Direct discussions with Trump continue to be the gamechanger for nations currently on the administration target list that want off. New talks with the regime in Iran would appear to the most logical candidate. The U.S. president indicated on Tuesday that he is open to Tehran following the same trajectory with him as Pyongyang did this past year.

“I hope we have a similar trajectory. I think Iran should be something that happens,” the president told reporters after the speech.

But Iran sees itself as the aggrieved party following U.S. nullification of the Joint Comprehensive Plan of Action (JCPOA).

Iranian president Hassan Rouhani delivered a blistering rebuke to Trump. “It is unfortunate that we are witnessing rulers in the world ride public sentiments and gain popular support through the fomenting of extremist nationalism and racism and through xenophobic tendencies resembling a Nazi disposition,” he said. Iranian government statements routinely seek to portray the United States, not Iran, as the nation outside the bounds of international norms. Trump said he won’t meet with Rouhani but deemed him an “absolutely lovely man.”

It could get truly heated as September draws to a close. On Wednesday Trump chairs a UN Security Council meeting.

Image: U.S. President Donald Trump sips Diet Coke from his wine glass after a toast during a luncheon for world leaders at the 73rd session of the United Nations General Assembly in New York, U.S., September 25, 2018. REUTERS/Carlos Barria