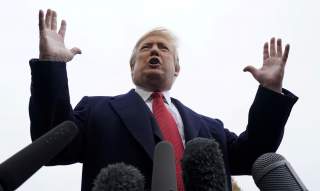 A frequent criticism of President Donald Trump is that he has undermined the “rules-based” liberal international order that the United States installed after World War II and subsequent generations of American leaders maintained. Unfortunately, there always has been far more image than substance to that international system. In reality, the U.S.-led (indeed, the U.S.-dominated) liberal international order has not been all that liberal, nor has it been all that orderly.

The rules-based aspect is extremely selective, if not hypocritical. The United States and its Western allies frequently lecture other countries about violating proper international norms. During the Cold War, Washington repeatedly denounced the Soviet Union for interfering in the internal affairs of other countries and committing outright acts of aggression. U.S. leaders excoriated Moscow’s brutal crackdowns in East Germany (1953), Hungary (1956) and Czechoslovakia (1968). Later, Washington fumed about the Soviet invasion and occupation of Afghanistan and even lower-profile Kremlin meddling in such places as Nicaragua, El Salvador, and Angola.

Similar hectoring has continued into the post-Cold War era directed at a noncommunist Russia. Washington responded angrily to Russia’s war against Georgia (even though evidence indicated Georgia initiated the fighting) and reacted with utter fury when Vladimir Putin’s government annexed Crimea. China and Iran also are prominent targets of U.S. criticism for “disruptive” behavior.

Yet the United States and its Western allies have repeatedly meddled (or worse) in the internal affairs of other nations. The CIA and its British counterpart MI5 orchestrated the 1953 coup that overthrew Iran’s government, and the CIA did the same the following year in Guatemala. In both cases, the violations of the standards the West established were especially brazen and inappropriate, since the ousted governments were democratic. The United States was implicated in numerous other coups or coup attempts, including in Indonesia, South Vietnam, and Chile.

The milder forms of U.S. meddling have been even more frequent. Studies indicated that Washington has interfered in elections and other domestic political affairs in more than eighty countries, including some two dozen, full-fledged democracies since World War II. The most recent instance was the flagrant U.S. (and European Union) interference in Ukraine to encourage demonstrators to oust the elected, pro-Russian president before the end of his term.

Both the United States and its allies have committed acts of military aggression in blatant violation of supposed international norms. Turkey invaded Cyprus in 1974 and occupied some 37 percent of its territory—an illegal occupation and de facto annexation that continues to this day. The United States and its NATO partners forcibly detached Serbia’s Kosovo province from Belgrade’s jurisdiction by launching a seventy-eight-day air war. And Washington led the wars to overthrow Saddam Hussein’s government in Iraq and Muammar Gaddafi’s in Libya.

The Kosovo episode is especially illustrative of U.S. and Western hypocrisy regarding a rules-based international order. Not only did the American-led North Atlantic Treaty Organization (NATO) launch an offensive war against a country that had not attacked any member of the alliance, but the war's aftermath underscored the selective application of rules. The post-war occupation of Kosovo was under the auspices of the United Nations. When Kosovo's leaders wanted to declare the province's outright independence, the Western powers faced a problem. It was certain that both Russia and China would exercise their veto power on the UN Security Council to prevent that outcome. The United States and some (not even all) of its NATO allies simply bypassed the Council and approved Kosovo’s declaration of independence on an ad hoc basis. Western actions regarding Kosovo highlighted the reality that those countries follow the “rules” they officially proclaim only when it suits their interests and goals.

The supposedly “liberal” aspect of the international order has been as sporadic and self-serving as the orderly component. Washington has been quite comfortable collaborating with oppressive and vicious regimes when it suited the objectives of U.S. policymakers. When the CIA overthrew the fledgling Iranian and Guatemalan democracies, the successor governments were dictatorships that committed horrid human rights abuses. Likewise, Washington preferred a succession of military dictatorships in South Korea over potentially unpredictable and left-leaning democratic factions. The same preference for “friendly dictators” was evident regarding such countries as Taiwan, the Philippines, Argentina, Nicaragua, and Chile.

That preference did not end when the Cold War did; it still is apparent from Washington’s response to the Egyptian military’s ouster of democratically elected President Mohamed Morsi. Moreover, that attitude is even clearer from Washington’s extremely cozy relationship with Saudi Arabia and its Gulf allies and clients—some of the most brutal, autocratic regimes on the planet.

A rules-based, liberal international order has seemed to apply only to the United States and a select number of its allies—primarily in Europe and East Asia—in their relations with one another. It has not been liberal or rules-based regarding the West’s behavior toward outside powers. Those relationships have been as pragmatic and even downright amoral as anything Machiavelli could have advocated. Additionally, Donald Trump has displayed a troubling personal fondness for authoritarian leaders and values. His foreign policy has exhibited even less concern for the views and preferences of other countries—even close U.S. allies—than his predecessors displayed. But he has not wrecked the liberal international order. That order never really existed in the way its advocates portrayed.

Ted Galen Carpenter, a senior fellow in defense and foreign-policy studies at the Cato Institute and a contributing editor at the National Interest, is the author of eleven books and more than seven hundred articles on international affairs. His latest book is Gullible Superpower: U.S. Support for Bogus Foreign Democratic Movements (forthcoming February 2019).