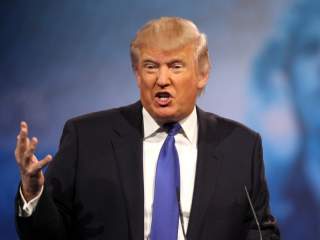 Few voters will make final decisions over whether or not Donald Trump pretended to be his own publicist or carried on like a rich playboy between marriages a generation ago. But his vice presidential selection is enormously important, both in terms of whether Trump can gather the GOP behind him, and whether he can be perceived broadly as a plausible president.

Trump’s own comments have been down the middle—he has specified that he wants someone with government experience who will help him cement the fissures in the GOP. But as if to demonstrate how broad such guidelines are, last week two surprising suggestions from serious Washington journalists were injected into the conversation.

One, by TNI editor Jacob Heilbrunn, was that Trump could calm the party’s troubled waters by selecting Marco Rubio as his veep—which would “enable a Trump-neocon rapprochement. . . [and] go a long way towards ending the schism created by his rise.”

Others nearer the Trump sphere have mentioned Rubio too, with an eye towards softening Trump’s perceived anti-Latino image and appealing to moderate or establishment Republicans. Political comics might have a field day riffing off Rubio’s campaign comments about the size of Donald Trump’s hands, and by every seeming indication Rubio is a long way from being ready to join such a ticket. Still, Heilbrunn is probably correct that a Rubio selection would considerably soften the neoconservative resistance to Trump.

A variant on this idea was put forth by Eli Clifton on Lobelog, this time by recommending Arkansas Senator Tom Cotton. Like Rubio, Cotton is a neocon protégé, a foreign-policy hawk who has recently been busying himself in the Senate trying to put barriers in the way of successful implementation of the Iran deal. Unlike Rubio, the young senator seems to be actually lobbying for the role, pouring cold water on Bill Kristol’s plans to run someone as an anti-Trump third-party candidate, and letting it be known that he would welcome being chosen by Trump.

If you consider these suggestions from Trump’s perspective, it’s clear that bringing on board a young U.S. senator, either Rubio or Cotton, who is very well thought of by the hawkish wing of the party, would probably bring him some favorable comment in the Weekly Standard and Washington Post editorial pages, as well as other venues. That would be helpful, to a point.

But Trump would then lose at least some of those who supported him because he was the least neoconservative candidate in the GOP field. Trump, the guy who said he could at least try to get along with Putin; Trump, who regularly answered questions about how he would stabilize the Middle East by pointing to America’s massive infrastructure decay and debt; Trump, who didn’t run shrieking from the slogan “America First;” Trump, who emphatically denounced the Iraq war and claimed with some plausibility to have opposed it from the outset—that part of Trump’s appeal to voters would vanish. Of course it’s difficult to estimate how much Trump’s margin of victory came from those stands, but it can’t have been negligible. He was, after all, the sole Republican who regularly promised a change in direction from the Bush/Cheney foreign policy. In a general election, he would be able to make Hillary’s support for wars destabilizing the Middle East (Iraq, Libya) a live issue—an area where, as Bernie Sanders has shown, the Democratic front-runner hasn’t even begun to find a way to defend her record. The choice of Rubio or Cotton would, in a single stroke, forfeit such lines of attack.

But there’s another equally vital reason not to choose Rubio or Cotton: what if Trump wins? A hold on the vice presidency would bring the neoconservatives back into the center of executive decision making. A vice president hires a staff of about two hundred—ample opportunity to bring into the administration a new tier of aspiring Douglas Feiths and Paul Wolfowitzes. The vice presidency would become, under such circumstances, a competing power center within the Trump administration, its staffers awaiting eagerly Trump’s retirement from the scene. They would be clearly next in line behind a president in his seventies. The substantial neoconservative media echo chamber would ensure that it would be Rubio’s or Cotton’s aides who were quoted, or received favorable profiles—not Trump’s. The neocons would have the capacity to oppose any unwanted Trump diplomatic initiatives from inside, leveraging exponentially their effectiveness. Meanwhile neoconservative maneuvering for the “next” administration would begin on day one of a Trump presidency. Neither Trump nor the country needs that.

There’s no reason Trump should treat Rubio or Cotton as enemies; in all likelihood, they have long political careers ahead of them, and won’t necessarily be neoconservatives forever. History is instructive on this point: for quite a while in the early seventies, Daniel Moynihan was Norman Podhoretz’s closest political and intellectual friend and a leading neoconservative; they grew apart a few years after Moynihan’s first senate election, and the New York senator emerged eventually as an unpredictable and eclectic centrist voice, disappointing the neocons by favoring arms control with the Soviet Union, and later opposing the expansion of NATO towards Russia’s borders.

In a decade, Cotton or Rubio or both might wind up in an analogous posture. But for the moment, the two are among the leading Senate representatives of a bellicose intellectual faction which rejects everything Donald Trump stands for, and their selection would rip up the coalition he has cobbled together. Their ideas about foreign policy—no matter how much media power is arrayed behind them—are failed ones, and are widely understood to have failed. Trump should do some ideological outreach with his veep selection, but Rubio or Cotton would be a bridge too far.