Trump Doubles Down On The China Trade War 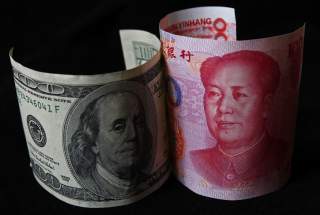 President Donald Trump is threatening another round of China tariffs, this time 10 percent on the remaining $300 billion in Chinese goods that are not yet subject to punitive tariffs. The new tariffs should go into effect on September 1, barring a change of heart on the part of the president or some real action on the part of the Chinese.

Trump’s aggressive push on tariffs has thrown the country’s expert class into a tizzy, with pundits predicting a severe shock to the American economy, blaming the trade war for every blip in stock prices, and warning of the potential for runaway inflation as consumers pay the price for Trump’s tariffs.

Meanwhile the economy is employing record numbers of people, inflation is running well below the Fed’s target rate, and stock markets are slightly up since the beginning of the “trade war” in April. The data simply refuses to satisfy the pundits’ appetite for economic carnage.

With the economy refusing to cooperate with their “gloom and doom” narrative, America’s pundits are now arguing that economic pressure is no way to get a trade deal from China. When a Chinese Communist Party newspaper tells them that “China will never give in to pressure,” they believe it.

And who knows? Maybe they’re right. But if China doesn’t give in to pressure, then its manufacturing base will continue moving to Vietnam and India. Less labor-intensive assembly work will move to Mexico, which has now displaced China as America’s top trade partner. China will lose its unique position at the center of global production networks, and with it much of its leverage over global politics.

All of these trends are in America’s national interest. And Trump’s trade war benefits America’s allies, too. In fact, the only country in the world with an interest in China holding all the strings of global value chains is China. If the Chinese don't realize that, then they’re in for some real surprises as the trade war drags on.

The United States, at worst, has not been affected by the trade war. Vietnam, India, and Mexico are clearly winning the war. Meanwhile the European Union will benefit from any improvements in Chinese economic practices that result from the trade war. Ditto post–Brexit Britain. The only one losing is China.

If China were the poor, hapless victim of American aggression, then this might be troubling. But it is China that has been breaking the world’s trade rules for the last two decades, not the United States. And everyone agrees (even the Chinese) that China’s President Xi Jinping has been intent on leveraging China’s economic muscle into global political influence. When an expansionist totalitarian police state with no respect for the rule of law demands special concessions in the global trading system, then it’s hard to have much sympathy.

Rarely has a country’s political class been so determined to undermine the success of their own government and promote instead an atmosphere of sensitivity toward the needs of its greatest geopolitical adversary. America’s pundits are absolutely correct to argue that China’s leaders want to “save face” by appearing not to lose the trade war. And they are just as absolutely wrong to argue that the United States should accommodate this desire.

Everyone in the trade war debate seems to be forgetting that America had a deal: back in April, before the trade war turned from cold to hot, the United States and China reached a broad agreement on “forced technology transfer and cyber theft, intellectual property rights, services, currency, agriculture and non-tariff barriers to trade.” China apparently agreed to the deal, but refused to agree to any enforcement mechanisms. That’s what happens when China’s leaders try to “save face”: they agree to a deal that is, in reality, no deal at all.

Trump’s tariffs are intended to bring China back to the negotiating table. If he fails, then China will suffer. That’s not in China’s national interest, but China is run by a self-appointed clique that routinely puts its own interests ahead of the country’s interests. What Trump should pursue is the American national interest, and that means doubling down on the trade war. If 1989 was the historical moment to squeeze the Soviet Union, then 2019 is the historical moment to squeeze China. Trump is right not to let that moment pass without a deal.