Trump, Eisenhower and Russia: A Chance for Peace 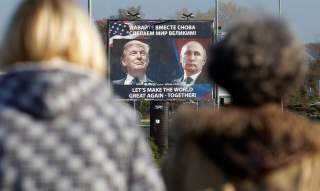 On the Washington Post op-ed page in October 2017, Mikhail Gorbachev urged “reversing the downward spiral in U.S.-Russian relations” that now dangerously imperils world order. He entreated our leaders “to return to sanity” and initiate a “full-scale summit on the entire range of issues,” focusing especially on controlling weapons of mass destruction.

Gorbachev’s clarion call harkened to a very similar plea by President Dwight D. Eisenhower almost sixty-five years ago when U.S. relations with the USSR were even more fraught with danger than they are today with Russia. In a remarkable speech titled The Chance for Peace, which he delivered on April 16, 1953, six weeks after Stalin’s death, Eisenhower urged the two superpowers to radically change direction. “Every gun that is made, every warship launched, every rocket fired,” Eisenhower declared, “signifies, in the final sense, a theft from those who hunger and are not fed, those who are cold and are not clothed.” He advocated a reduction in “the burden of armaments now weighing upon the world,” and offered to negotiate with the Soviet Union over the size of both countries’ military forces. For Eisenhower, “this [current massing of armaments] was not a way of life at all” and he challenged the Kremlin to wage “a new kind of war, . . . a total war, not upon any human enemy, but upon the brute forces of poverty and need.”

The historic context in which this speech was delivered made this a true act of political courage. McCarthyism was assuming increasing virulence, the Soviet Union’s repressive domination of Eastern Europe was at its height, and Cold War tensions remained very high, with the Korean War still ongoing. As noted by scholar Joshua Rubenstein in his book, The Last Days of Stalin, “[f]or many of Eisenhower’s admirers this speech remains among his most politically significant, ‘certainly one of the highlights of his presidency,’[quoting a top aide]. . .The American press responded [to Eisenhower's proposals] with deep enthusiasm. Newsweek said that it ‘lifted hearts in the entire free world.’” (pages 173–74)

Like Eisenhower six decades earlier, President Trump also advocated during his campaign that this nation should adopt an entirely new approach to Russia. Citing the trillions of dollars expended in the Iraqi war and other foreign initiatives, President Trump argued that the U.S. should jettison the foreign policy of his predecessors which so antagonized President Putin and his cohorts. Instead, monies devoted to wasteful wars and attempts at regime changes should be redirected to U.S. domestic needs, including modernizing infrastructure and assisting U.S. workers adjust to new economic realities. Indeed, when candidate Trump became president-elect last November, many hoped for the emergence of a new, constructive and amicable relationship with Putin’s Russia.

Sadly, as the first anniversary of his election approaches, relations with Russia continue to deteriorate and no near term improvements appear possible. In the view of many, the July vote in Congress (419 to 3 in the House and 98 to 2 in the Senate), stripping President Trump of discretion to reduce sanctions against Russia, effectively freezes the U.S.-Russian relationship. There is the real possibility that the United States will only regain the ability to reverse the current debilitating “downward spiral,” as Gorbachev wrote, when the Department of Justice concludes its inquiry; and even then, only if Special Counsel Mueller’s investigation vindicates President Trump of complicity with Russian operatives or of any other alleged illegality relating to Russia. The resulting paralysis in the relationship could last for many more months, if not years.

We believe that such a stalemate must be avoided at all costs, and is not preordained. There is too much to lose by failing to address the consequences of a continuing drift in U.S.-Russian relations, allowing menacing problems to fester. These include: the real potential for accidental war inadvertently triggered by the lack of effective government-to-government dialogues at military and civilian levels, with catastrophic results; military confrontations in Ukraine involving the U.S. or its allies, with unforeseen escalations; destabilizing measures by Russia to further lower the threshold of its own planned use of nuclear weapons; and a host of other very significant matters that require priority attention. Even entirely peaceful collaborations may fall by the wayside, as evidenced by the Russian Duma’s recent threat to prohibit the United States from accessing the International Space Station on Russian space vehicles, the only means now available to do so.

The following path is offered as a way out of the present—and very ominous—impasse:

First, the White House should actively and creatively reach out to congressional leaders of both parties and forge a consensus on proposals to be advanced in negotiations with President Putin. The distrust that now exists in Washington can be assuaged, at least in part, by means of a jointly conceived program for approaching the Russians. From the perspective of the United States, the various parties are generally on the same page respecting U.S. objectives—or can be led to that point—on most of the substantive issues to be resolved.

Second, President Trump should publicly announce an overarching vision for our relationship with Russia, incorporating many elements of President Eisenhower’s courageous “Chance for Peace” speech. “Turning swords into plowshares” themes may serve to unify, and even excite, the disparate, and deeply divided, elements of American society. Liberal Democrats, traditional Republicans, and evangelical supporters of President Trump will likely find inspiration in Eisenhower’s stirring rhetoric of the 1950s, as adapted to current circumstances. Announcing such a policy can be anticipated to “lift hearts in the entire free world.”

Bold steps such as these have been taken by President Trump’s predecessors in dramatically changing our relationship with Russia, even when mutual mistrust was at a high level, and have achieved considerable successes. In 1972, President Nixon led the way in reducing nuclear arsenals through the Strategic Arms Limitation Talks agreement of 1972. This was accompanied by the landmark U.S.-Soviet Trade Agreement and the creation of a Joint Commercial Commission, both of which ushered in a new era of economic cooperation. After President Reagan’s groundbreaking meetings with Gorbachev in Geneva and Reykjavik, a momentous treaty was signed in 1987 to eliminate intermediate and shorter-range missiles. This was followed during the first Bush, Clinton, second Bush and Obama administrations by treaties to impose further and very substantial limitations on both countries’ nuclear arsenals. As highlighted by President Eisenhower, who worked with the USSR as an ally in World War II when our soldiers met as “triumphant comrades in arms,” both Russia and America have everything to gain by redirecting resources to peaceful purposes, and joining together “to turn the black tide of [current] events. If we failed to strive to seize this chance, the judgment of future ages would be harsh and just.”

Third, Gorbachev’s call for a summit between the United States and Russia should be seriously pursued, and the scope should be broadened to encompass major issues now burdening the relationship. Gorbachev recognized: “It will not be easy to cut through the logjam of issues on both sides. But neither was our dialogue easy three decades ago. It has its critics and detractors, who tried to derail it.” The agenda should include efforts to resolve the 2014 Ukrainian and Crimean crises, as well as newly injected concerns arising from Russian meddling in the U.S. electoral process.

Fourth, shortly after President Trump was elected, the authors of this article set forth specific proposals on how to resolve, or at least contain, the Ukrainian and Crimean problems. Those proposals still remain quite viable, in our view, and merit further review. The essential features were: (a) that Russia and the West “agree to disagree” for the indefinite future on the diplomatic status of Crimea; this was the essential status accorded to the Baltic States from 1940 through the demise of the USSR, and permitted peaceful coexistence throughout the Cold War era; (b) that the status quo in Donbas as part of Ukraine continue, with an effectively enforced ceasefire; and (c) that a multibillion dollar aid package be assembled from international sources directed to economic recovery in Ukraine.

Fifth, as part of the summit between Presidents Trump and Putin, a full and frank exchange on Russian involvement in U.S. domestic elections must be addressed. Rules should be adopted to avoid undue interference in the internal affairs of each country, with reciprocity and preservation of the integrity of each country’s body politic as the agreed-upon objective.

In approaching this issue, which has destabilized the relationship so bitterly in the post-election period, the United States must maintain a proper perspective. In the past, both the United States and Russia have interfered covertly, and sometimes publicly, in the political affairs of other nations when they deemed strategic interests were at stake. In that regard, the United States has expended billions of dollars since the collapse of the Soviet Union in assisting a network of nongovernment organizations in Russia in promoting freedom of press and speech, religious tolerance, an independent judiciary, absence of corruption, and other values long prized in Western societies. Americans viewed such involvement as benign, motivated by humanitarian concerns. However, fostering such democratic values in Russia has not always been welcomed by many quarters within the Russian establishment, who attribute malign motives to the United States, including intrusive meddling in Russia’s internal affairs and suspicions of regime change. As Graham Allison and Dimitri Simes noted in their analysis, which was published in the National Interest, as “a recent superpower still nostalgic for its past glory, Russia is particularly sensitive to efforts to shape its domestic process.”