Trump and Erdogan: No News Is Bad News 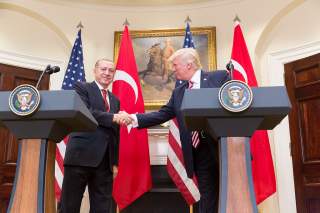 Turkish president Recep Tayyip Erdoğan’s highly anticipated meeting with President Trump this week in Washington had decisionmakers bracing for fireworks. What they got was an absolute dud.

While the specific details of what was discussed have not fully emerged, American officials released a collective sigh of relief even before Erdoğan’s plane left the United States. What could have been a showdown between two allies never happened, and in its place, Turkish officials complained about the Russian leaking scandal overshadowing their critical meeting.

The chorus of analysts in Washington who predicted a “collision course” between Turkey and the United States over the Trump administration’s decision to arm the Kurds in Syria, a group Ankara considers terrorists and an existential threat, proved to have been too pessimistic. Meanwhile, analysts from Turkey who hoped for a “reset” in relations with Washington were proven too optimistic. Instead, the two leaders played nice, seizing the opportunity to build personal ties, which both leaders value. The timing and journey of Erdoğan’s trip is particularly instructive. Beginning earlier this month, Erdoğan met with President Putin of Russia to discuss outstanding bilateral issues, after which he left to Beijing to meet with President Xi of China to discuss the “One Belt, One Road” initiative and finally flew straight to Washington to meet with President Trump, completing his global tour—his first trip since having narrowly won a controversial referendum in Turkey.

Trump, who had ingratiated himself by being the first Western leader to call to congratulate Erdoğan after the referendum, was not able to reap the policy benefits over critical issues such as arming the Kurds of Syria, Fethullah Gülen’s extradition for his alleged role in Turkey’s failed coup attempt, and other outstanding issues. While Turkey’s Western orientation as a NATO ally and European Union–bound democracy have increasingly come under pressure because of domestic events in Turkey, Erdoğan hoped to showcase a burgeoning bromance with Trump that could overcome this narrative and also offer himself as one of America’s closest allies.

Instead of making an impact on these serious issues, most of the time spent in front of the cameras was lost to the U.S. media firestorm on Trump’s troubles with Russia. This unfortunately reinforces a widening perception gap between Ankara and Washington that no level of personal relations between the two leaders can bridge. Turkey is critical for America’s fight against ISIS and America First policy in the Middle East, but not in the way Erdoğan might imagine. Rather than being a primary driver of U.S. policy, Turkey can be a major spoiler, as Trump will undoubtedly learn as he heads to Saudi Arabia to deliver a speech on Islam and Israel to reinforce his Judeo-Christian values while trying to navigate the political potholes that litter his Middle Eastern policy path.

Without a coherent strategy on Turkey, which straddles Europe and the Middle East and sees itself as a great power that can influence global events from the Mediterranean to the Great Wall, U.S.-Turkey relations are doomed to be less than the sum of their parts.

Despite incredibly strong business-to-business, government-to-government and military-to-military ties, U.S.-Turkey relations have lacked the strategic glue to overcome the Cold War inertia that set this relationship in motion. A new strategic framework or “model partnership” was not forthcoming from Trump, nor did he seem to want to champion the U.S.-Turkey relationship in Washington, leaving Erdoğan to opportunistically engage whenever convenient in a way that neither Putin or Xi would dare leave for such a cunning leader.

What comes next in U.S.-Turkey relations will most likely be driven by events in Turkey and in its regional neighborhood, rather than in Washington, which is a missed opportunity. The missing soft-power links of people-to-people exchanges and society-level engagement with innovative entrepreneurs and investments in one of the fastest-growing demographic and economic markets in Eurasia would have been low-hanging fruits for a master dealmaker to take on as his own.

More troublingly, as Turkey flirts with Russia and Iran about a solution in Syria or contemplates Chinese missile-defense systems within a NATO framework, the West is losing ground due to its own lack of engagement with Ankara.

A renewed focus on hard-power concerns in defeating ISIS or regional solution for Syria would have made an equally convincing show of a strategic relationship that is currently drifting. U.S.-Turkey relations are too important to be overshadowed, no matter how difficult a partner Erdoğan may prove to be or how loud the noise in Washington can get. If this visit was any indication, we have a long way to go before a coherent strategy can be proclaimed.

Joshua W. Walker, PhD (@drjwalk) is Senior Vice President at APCO Worldwide, a Transatlantic Fellow at the German Marshall Fund of the United States and formerly worked on Turkey for the U.S. State Department.