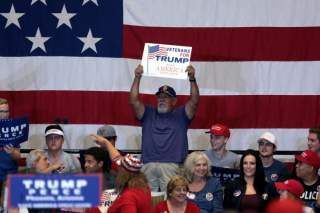 Establishment Republicans won’t stop saying or doing stupid things this election season. One after another, they have declared their hatred for Donald Trump or endorsed Hillary Clinton. Those who have not stooped to such unseemliness have little to brag about either, as many of them have repeatedly failed to defend their party’s nominee or undermined him at every turn.

Each time, establishment Republicans eagerly proclaim that they are more decent than the man chosen by a record number of GOP primary voters and supported by 83 percent of self-identified Republicans. Yet, while objecting to Trump’s unconventional style and rhetoric, the Trump haters have no appreciation or answer for the grave issues he raises.

Trump’s refusal to stay quiet upon being attacked by the Muslim parents of deceased Army Captain Humayun Khan unleashed a torrent of anger and self-flagellation on the right. One former senior Republican official, announcing his support for Hillary, said that Trump was “a bigot, a bully, and devoid of grace or magnanimity.” Soon afterwards, Sen. Susan Collins (R-Maine) and dozens of former national security advisors for former Republican administrations declared they could not vote for Trump either.

While Americans of all political stripes can agree that presidential aspirants should keep their mouths shut when criticized by a Gold Star family, patriotic citizens do not need to blithely ignore pressing national security threats just because they touch on sensitive issues like race, ethnicity, and religion.

At the Democratic National Convention in Philadelphia, the Khans pointed to their son’s sacrifice to condemn Trump’s call for a temporary ban of Muslims into the United States. In the unfortunate kerfuffle that followed, almost no one—certainly not the cravenly GOP establishment—bothered to point out that the Islamic radicals that Trump wishes to ban do not exist in a vacuum.

In fact, many come from countries that subscribe to radical Islamic views that breed terror. Let’s look at Pakistan, the country of origin for the Khans. There, 84 percent of the population supports sharia law, which subjugates women as second-class citizens and outlaws homosexuality as an offense punishable by death. Admitting immigrants and refugees who hold these views—at a time when homegrown radicalization and lone-wolf terrorism is on the rise in the United States—looks a lot more like the idiotic policy that Trump wishes to change rather the feel-good religious tolerance that Hillary Clinton and others are trying to preach.

In fact, Pakistanis make up the largest number of foreign individuals convicted of terrorism and terror-related offenses in the United States since 9/11. They are not alone of course: citizens from other places where terror reigns, such as the Palestinian Authority, are featured prominently on this convict list as well.

The Khans may be model Americans, and their son died a hero, but the rest of us have every right to demand security measures that will offer protection from potential jihadists who wish to destroy America. In that light, Trump’s proposal to ban or restrict immigration from terror-prone Muslim countries is nothing to be ashamed of.

Democrats and mealy-mouthed Republicans like to call Trump a racist and a demagogue, but they cannot dispute his claim that radical Islam is fundamentally incompatible with Western values and institutions.

Unfortunately, the GOP establishment’s squeamishness does not end with just one issue. Speaker Paul Ryan’s views on the Black Lives Matter movement shed much light on the collective hypocrisy.

When asked on CNN if he would describe the movement as divisive, the speaker declined. The is the same man who never misses an opportunity to label Trump as racist and divisive, even though unlike protests organized by the Black Lives Matter movement, Trump has never called for police officers to be killed or fried “like bacon.”

Not surprisingly, during the GOP primaries, 14 million voters opted for Trump’s bluntness and authenticity over objections from establishment figures like Ryan. Regrettably, the establishment has shown not one iota of willingness to reflect on their own failures, and have preferred to believe that Trump clinched the nomination in a distasteful manner from voters with distasteful views.

As it turns out, what many GOP voters find distasteful are, among other things, the following: being branded by their political leaders as racist, xenophobic and mean-spirited for wanting to uphold the rule of law and secure America’s borders; being lectured by out-of-touch elites about the benefits of free trade when those elites have never known the humiliation of being laid off from manufacturing jobs in their fifties; being told that they have no business saying anything about Islam except that it is a religion of peace, even after Islamic terrorists repeatedly slaughter innocents at home and abroad.

This makes no difference to Republicans who consider themselves too decent to vote for Trump. They would prefer to criticize Trump’s rough-and-tumble business practices without paying any attention to Clinton’s national security and ethical scandals involving Benghazi, the Clinton Foundation or her private email server. Similarly, they would prefer to become indignant over Trump’s comments about women than to recall that Hillary has in the past repeatedly enabled her husband’s abuse of women, including threatening and attempting to silence a woman that Bill allegedly raped as attorney general of Arkansas.

In this momentous presidential election, millions of Americans have found Trump’s bombast—along with his flaws—entertaining, charming and even endearing. What we are now discovering is that the very imperfect Trump has brought out the true colors of phony Republicans who clearly care far more about their own vanity than the electorate they now openly disdain.

Ying Ma is deputy director of the Committee for American Sovereignty, a pro-Trump super PAC, and author of Chinese Girl in the Ghetto.