Trump Faces a GOP Mutiny on the Russian Bounties 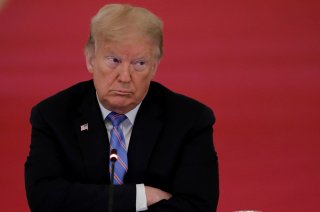 Here we go again. The Trump administration is mired in a fresh battle over intelligence reports and Russia. The latest controversy is centered on the reports that a GRU unit authorized bounties to the Taliban to target American soldiers. The reaction in America to the revelation was instantaneous and swift. Rep. Liz Cheney, who appears to be trying to distance herself from Trump, demanded that the White House explain why nothing was done. The Lincoln Project ran an advertisement with a Russian voiceover calling Trump an agent of the Kremlin. House Speaker Nancy Pelosi and other leading Democrats demanded that fresh sanctions be imposed on Moscow.

Trump’s response was to declare that the mutiny on the bounties was a deep state hoax aided by the New York Times. It was the Russia investigation all over again. He declared on Twitter, “The Russia Bounty story is just another made up by Fake News tale that is told only to damage me and the Republican Party. The secret source probably does not even exist, just like the story itself. If the discredited @nytimes has a source, reveal it. Just another HOAX!”

The administration was blindsided by the initial story. But now its begun to fight back. Yet another memo has been leaked to—where else?—the New York Times. It was recently composed and seeks to defend the administration. The National Intelligence Council has drafted a two-and-half-page document dated July 1 that says the CIA and the National Counterterrorism Center had “medium confidence” that a GRU unit was handing out bounties to the Taliban. It seeks to emphasize the uncertainties, doubts, and general haze surrounding any accusations of Russian perfidy in Afghanistan. But the new memo apparently wants to shift the burden of proof on the bounty issue from the administration to its accusers.

So, what does it all add up to? The truth is that, more often than not, intelligence reports serve as a form of war by other means. Intelligence is never foolproof. The CIA went into convulsions when it was headed by George H.W. Bush and he authorized the creation of a Team B to analyze its assessments of Soviet behavior and weapons buildup. More recently, the Iraq War became a gigantic debacle for the CIA as George Tenet sought, as far as possible, to accommodate the desires of vice-president Dick Cheney. To say that the intelligence was cooked would be to insult chefs everywhere. It was broiled to a crisp as the CIA created a record of Saddam Hussein’s weapons of mass destruction program. To act as though the CIA is some sacrosanct temple of intelligence purity defies the historical record.

At the same time, the brouhaha over the bounties plays into the larger narrative of Trump as unwilling to confront Moscow. It would be idle to dispute that Russia wants payback for the humiliation and suffering that America inflicted upon it during the 1980s, when Washington sent Stinger missiles and other weaponry to drive Moscow out of Afghanistan. But Trump’s critics are alleging that he lacks the cojones to respond to any Russian aggression, large or small. His failure to focus on the issue, we are told, was no accident.

Still, Trump doesn’t focus on any foreign policy issue, whether it’s North Korea, Venezuela, Taiwan, Libya or Syria. He’s basically indifferent to the rest of the world. The notion that he would listen to briefers, let alone actually read official documents submitted to him defies credulity. This isn’t a line of defense that administration officials appear eager to embrace: “This president, I'll tell you, is the most informed person on Planet Earth when it comes to the threats that we face," White House press secretary Kayleigh McEnany declared on Tuesday. But as former national security adviser John Bolton observes in his new memoirs, “I didn't think these briefings were terribly useful, and neither did the intelligence community, since much of the time was spent listening to Trump rather than Trump listening to the briefers."

The larger issue is that Trump has never made a sustained case for improving relations with Russia. He’s talked about it. He’s met with Vladimir Putin. He muses about expanding the G-7. But he takes no practical action. In fact, his own administration is staffed with officials who don’t share his views, including Secretary of State Mike Pompeo, who is a well-known Russia hawk. So is National Security Adviser Robert C. O’Brien.

When it comes to Russia policy, Trump has unequivocally failed both abroad and at home. He has not improved relations with Moscow. Nor has he made an effective case that improving relations with it would benefit America. The bounty story has not delivered a political knockout blow to Trump, but it has wounded him. The upsurge of anger over the bounty issue demonstrates that if Trump loses the election this fall, the GOP would promptly return to its openly hostile stance, denouncing Joe Biden for being soft on Russia.