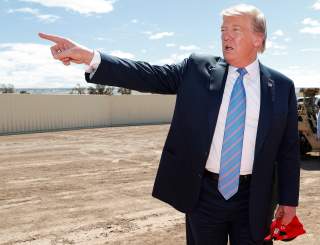 Whether on China, Iran, or Venezuela, the Trump administration’s consistent refrain is “maximum pressure.” Mexico is no different. Thursday evening President Donald Trump announced a new series of tariffs on all imports from Mexico. This is in response to the ongoing migrant crisis along the southern border which has seen over a hundred thousand people enter the United States every month. “Mexico’s passive cooperation in allowing this mass incursion constitutes an emergency and extraordinary threat to the national security and economy of the United States,” the president claimed in an official statement.

To incentivize the Mexican government into preventing migrants from reaching the U.S. southern border, a 5 percent tariff will be placed on all imports starting on June 10. Trump is doing this by invoking presidential authority under the International Emergency Economic Powers Act, which became applicable after his declaration of a national emergency in February. The tariff will subsequently increase 5 percent every month until it reaches 25 percent in October. It will remain at that level until the Trump administration decides the Mexican government is acting enough to prevent migration.

“If you look at it from an investor’s point of view and a corporate point of view, what we have in Mexico is the export, one of the high exports of illegal aliens,” said Peter Navarro, Director of Trade and Manufacturing Policy, who concluded Mexico should stop this “criminal enterprise.” Other administration officials were not so gung-ho; CNBC reports that both Treasury Secretary Steve Mnuchin and Trade Representative Robert Lighthizer opposed the new tariffs, while Advisor to the President Stephen Miller pushed for their implementation.

“President Trump's imposition of tariffs on Mexico reminds me of the joke about what you call a thousand lawyers at the bottom of the ocean: a good start,” said Chris Buskirk, editor of American Greatness. “Mexico not only fails to protect its own borders, it actively encourages the human trafficking, which includes modern-day slavery, across its territory and into the United States. That's unconscionable and it must stop. It's immoral and it harms not only the people involved but American citizens and the American nation.” Buskirk told TNI that the new tariffs are just “a very modest step that the president could increase quickly if the Mexican government continues to allow an assault on our southern border.”

“The use of tariffs as a means of protecting American interests has a long history that includes Washington, Jefferson, and Lincoln, and one that, wisely used, should continue to be a part of every president's arsenal,” Buskirk concluded.

Others believe the tariffs are not only ineffective but destructive to the American economy. “President Trump's threat of new tariffs on Mexican goods to goad the Mexican government into stopping immigration into the United States is just plain bad policy. If the U.S. government cannot stop the immigration, what makes him think the Mexican government could?” asked Mark Thornton, a Senior Fellow at the Mises Institute. “Plus, it hurts Mexican workers and American consumers (who actually pay for the tariff in the form of higher prices).” This morning the Dow Jones Industrial Average dropped 300 points.

Furthermore, Thornton doesn’t believe the Trump administration is addressing the core motivations for the mass migration. “The reason people from Central America are risking their lives to get into the United States is our own ‘War on Drugs’ which has caused failed states in Central America, with drug cartels threatening the lives of the people, police, and legal officials in those countries,” he told TNI.

The drug war was apparently not far from President Trump’s mind. “In order not to pay Tariffs, if they start rising, companies will leave Mexico, which has taken 30% of our Auto Industry, and come back home to the USA. Mexico must take back their country from the drug lords and cartels. The Tariff is about stopping drugs as well as illegals!” he tweeted this morning.

While protectionism enjoyed a long history in the Republican Party, it’s been economically out-of-fashion for decades. Congressional Republicans have criticized Trump’s attempts to revive this dormant legacy since his campaign. “Trade policy and border security are separate issues. This is a misuse of presidential tariff authority and counter to congressional intent,” said Senator Chuck Grassley (R-IA), Chairman of the Senate Finance Committee. “Following through on this threat would seriously jeopardize passage of USMCA [United States-Mexico-Canada Agreement], a central campaign pledge of President Trump’s and what could be a big victory for the country,” worried Grassley.