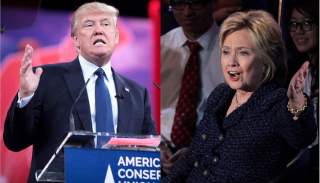 A former Reagan administration official had just one piece of advice for me before the first debate between Hillary Clinton and Donald Trump. “Watch it with the sound off,” he suggested—not because he disapproved of what the two candidates would say, although he did, but because what most viewers would take away from the debate wouldn’t be an argument or policy but just a visual impression.

I didn’t heed my friend’s advice—I kept the sound on—but the visual contrast between Clinton and Trump was nonetheless striking. She wore solid red. He wore a dark suit with a blue tie and an American flag lapel pin. It was a safe choice on Trump’s part: the lapel pin has been part of the professional politician’s ensemble since 9/11. He had worn an assertive red tie in several Republican debates, but last night he went with a soft blue, as if signaling that he was cooling down his inflammatory image. Clinton, on the other hand, was all red. Sartorially at least, the candidates seemed to be trying to break away from the stereotypes that defined them: Trump as a wild man, Clinton as an unsteady leader.

Once the debate began, however, it became clear from the candidates’ words and manner just how little had changed. Trump had not accepted the conventional wisdom that told him to moderate himself for the general election. He returned again and again to his core themes of crime, immigration, and what he insisted were bad deals cut by America’s leaders with trade rivals and Iran. Trump freely interrupted Clinton, and during the earlier part of the debate he seemed to have the momentum—certainly he had more sharply defined and polarizing themes than Clinton did. Throughout the latter part of the debate, however, Clinton grew increasingly confident. She had had trouble at the outset articulating persuasive themes of her own, but fighting Trump over specific issues and actions—from America’s NATO commitments to Trump’s refusal to release his tax returns—she projected confidence. Trump turned the tax question around as effectively as anyone could, promising to release his returns when Clinton released the emails she kept on her private server as secretary of state. But in fighting back against Trump, Clinton won the audience’s sympathy, to judge from the hoots of approval that repeatedly greeted her as the night wore on.

Clinton sympathizers in the media declared her the hands-down winner as soon as the debate concluded. Even pundits in Trump’s corner, what few there were, were apt to pronounce Clinton the night’s winner. But then, expert verdicts had been similarly unkind to Trump after each Republican debate—and nevertheless, viewers and primary voters drew a different conclusion. During the primaries, too, there was often a difference between Trump’s performance at the start of the debate, when the contrast he presented with the standard-issue politicians on stage made him stand out as a dominant figure, and his performance later on, when the novelty had worn off and Trump had to engage his opponents on issues that they knew better. But were viewers last night paying as much attention during the second half of the debate as during the first? Or did Trump’s controlling performance at the start define him in the eyes of viewers as the candidate forceful enough to occupy the Oval Office—the one who could set the terms of the debate? Expert opinion was with Clinton, but the public may (or may not) come to a different conclusion after a few days: Trump has, after all, pulled off more surprising upsets.

However the polls come out in the weeks ahead, Trump has changed the national conversation in startling ways. Here last night was the Republican nominee demanding more burden-sharing from America’s allies and questioning NATO’s relevance a quarter century after the fall of the USSR. Yet even as Trump raised points that should have been debated years ago, he proposed unrealistic answers: “I think we have to get NATO to go into the Middle East with us,” he said, “in addition to surrounding nations, and we have to knock the hell out of ISIS.” He insisted that he had never supported the Iraq War, a fact that he claimed Sean Hannity could confirm from private conversations at the time that conflict began. Yet he also lambasted Clinton and the Obama administration for withdrawing U.S. troops from Iraq.

Clinton, for her part, defended the Iran deal and underlined the damage that even a hint of faltering support for U.S. allies could do. “I want to reassure our allies in Japan and South Korea and elsewhere that we have mutual defense treaties and we will honor them,” she said. “I know that this campaign has caused some questioning and worries on the part of many leaders across the globe. I've talked with a number of them. But I want to—on behalf of myself, and I think on behalf of a majority of the American people, say that, you know, our word is good.”

Clinton was not only defending her own record as a former senator and secretary of state, she was assuming an incumbent president’s usual role of defending the strategic consensus in Washington. Trump, on the other hand, gave voice to both a revisionist right that rejects any American mission as policeman of the world and a hawkish right that insists that the United States can swiftly and effectively crush any danger with military force. The election is becoming a test of public support for the Washington consensus. And the fact that Trump has come this far is a sign that public support for that consensus—on trade, war, and immigration—has already eroded to a much greater degree than anyone in Washington dares to admit. Clinton may persuade voters to elect her over Donald Trump, but persuading the public to continue supporting the global economic and strategic order that her husband was instrumental in affirming after the Cold War may prove to be a much tougher challenge. And Trump, whether he wins or loses in November, is forcing Washington to confront its failures. The Middle East is not the only place where Washington has failed to win hearts and minds.