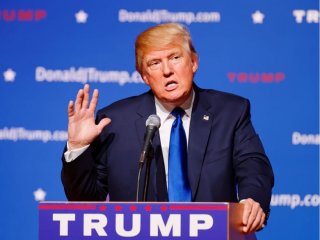 This will change when I am president.

To all our friends and allies, I say America is going to be strong again. America is going to be a reliable friend and ally again. We’re going to finally have a coherent foreign policy based upon American interests, and the shared interests of our allies. We are getting out of the nation-building business, and instead focusing on creating stability in the world. Our moments of greatest strength came when politics ended at the water’s edge. We need a new, rational American foreign policy, informed by the best minds and supported by both parties, as well as by our close allies. This is how we won the Cold War, and it’s how we will win our new and future struggles.

First, we need a long-term plan to halt the spread and reach of radical Islam.

Containing the spread of radical Islam must be a major foreign policy goal of the United States. Events may require the use of military force. But it’s also a philosophical struggle, like our long struggle in the Cold War. In this we’re going to be working very closely with our allies in the Muslim world, all of which are at risk from radical Islamic violence.

We should work together with any nation in the region that is threatened by the rise of radical Islam. But this has to be a two-way street – they must also be good to us and remember us and all we are doing for them. The struggle against radical Islam also takes place in our homeland. There are scores of recent migrants inside our borders charged with terrorism. For every case known to the public, there are dozens more. We must stop importing extremism through senseless immigration policies. A pause for reassessment will help us to prevent the next San Bernardino or worse – all you have to do is look at the World Trade Center and September 11.

And then there’s ISIS. I have a simple message for them. Their days are numbered. I won’t tell them where and I won’t tell them how. We must as, a nation, be more unpredictable. But they’re going to be gone. And soon.

Secondly, we have to rebuild our military and our economy.

The Russians and Chinese have rapidly expanded their military capability, but look what’s happened to us! Our nuclear weapons arsenal – our ultimate deterrent – has been allowed to atrophy and is desperately in need of modernization and renewal. Our active duty armed forces have shrunk from 2 million in 1991 to about 1.3 million today. The Navy has shrunk from over 500 ships to 272 ships during that time. The Air Force is about one-third smaller than 1991. Pilots are flying B-52s in combat missions today which are older than most people in this room.

And what are we doing about this? President Obama has proposed a 2017 defense budget that, in real dollars, cuts nearly 25 percent from what we were spending in 2011. Our military is depleted, and we’re asking our generals and military leaders to worry about global warming. We will spend what we need to rebuild our military. It is the cheapest investment we can make. We will develop, build and purchase the best equipment known to mankind. Our military dominance must be unquestioned.

But we will look for savings and spend our money wisely. In this time of mounting debt, not one dollar can be wasted. We are also going to have to change our trade, immigration and economic policies to make our economy strong again – and to put Americans first again. This will ensure that our own workers, right here in America, get the jobs and higher pay that will grow our tax revenue and increase our economic might as a nation. We need to think smarter about areas where our technological superiority gives us an edge. This includes 3-D printing, artificial intelligence and cyberwarfare.

Finally, we must develop a foreign policy based on American interests.

Businesses do not succeed when they lose sight of their core interests and neither do countries.

Look at what happened in the 1990s. Our embassies in Kenya and Tanzania were attacked and seventeen brave sailors were killed on the USS Cole. And what did we do? It seemed we put more effort into adding China to the World Trade Organization – which has been a disaster for the United States – than into stopping Al Qaeda. We even had an opportunity to take out Osama Bin Laden, and didn’t do it. And then, we got hit at the World Trade Center and the Pentagon, the worst attack on our country in its history.

Our foreign policy goals must be based on America’s core national security interests, and the following will be my priorities. In the Middle East, our goals must be to defeat terrorists and promote regional stability, not radical change. We need to be clear-sighted about the groups that will never be anything other than enemies. And we must only be generous to those that prove they are our friends.

We desire to live peacefully and in friendship with Russia and China. We have serious differences with these two nations, and must regard them with open eyes. But we are not bound to be adversaries. We should seek common ground based on shared interests. Russia, for instance, has also seen the horror of Islamic terrorism.

I believe an easing of tensions and improved relations with Russia – from a position of strength – is possible. Common sense says this cycle of hostility must end. Some say the Russians won’t be reasonable. I intend to find out. If we can’t make a good deal for America, then we will quickly walk from the table.

Fixing our relations with China is another important step towards a prosperous century. China respects strength, and by letting them take advantage of us economically, we have lost all of their respect. We have a massive trade deficit with China, a deficit we must find a way, quickly, to balance. A strong and smart America is an America that will find a better friend in China. We can both benefit or we can both go our separate ways.

After I am elected president, I will also call for a summit with our NATO allies, and a separate summit with our Asian allies. In these summits, we will not only discuss a rebalancing of financial commitments, but take a fresh look at how we can adopt new strategies for tackling our common challenges. For instance, we will discuss how we can upgrade NATO’s outdated mission and structure – grown out of the Cold War – to confront our shared challenges, including migration and Islamic terrorism.

I will not hesitate to deploy military force when there is no alternative. But if America fights, it must fight to win. I will never send our finest into battle unless necessary – and will only do so if we have a plan for victory. Our goal is peace and prosperity, not war and destruction. The best way to achieve those goals is through a disciplined, deliberate and consistent foreign policy.

With President Obama and Secretary Clinton we’ve had the exact opposite: a reckless, rudderless and aimless foreign policy – one that has blazed a path of destruction in its wake. After losing thousands of lives and spending trillions of dollars, we are in far worse shape now in the Middle East than ever before. I challenge anyone to explain the strategic foreign policy vision of Obama-Clinton – it has been a complete and total disaster. I will also be prepared to deploy America’s economic resources. Financial leverage and sanctions can be very persuasive – but we need to use them selectively and with determination. Our power will be used if others do not play by the rules. Our friends and enemies must know that if I draw a line in the sand, I will enforce it.However, unlike other candidates for the presidency, war and aggression will not be my first instinct. You cannot have a foreign policy without diplomacy. A superpower understands that caution and restraint are signs of strength.

Although not in government service, I was totally against the war in Iraq, saying for many years that it would destabilize the Middle East. Sadly, I was correct, and the biggest beneficiary was Iran, who is systematically taking over Iraq and gaining access to their rich oil reserves – something it has wanted to do for decades. And now, to top it all off, we have ISIS.

My goal is to establish a foreign policy that will endure for several generations. That is why I will also look for talented experts with new approaches, and practical ideas, rather than surrounding myself with those who have perfect resumes but very little to brag about except responsibility for a long history of failed policies and continued losses at war.