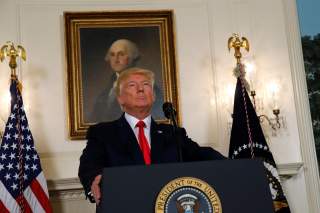 When Trent Lott was forced out as Senate Republican leader nearly fifteen years ago, I applauded the move.

Lott’s initial statement that “we wouldn’t have had all these problems” if Strom Thurmond’s Dixiecrat ticket had prevailed in 1948 was forgivable—he was clearly paying Thurmond, a longtime Senate colleague, a lighthearted compliment on his hundredth birthday rather than endorsing racial segregation. Yet the Mississippi Republican’s inability to convincingly disavow segregationists after several days of controversy was unforgivable, at least for someone who wanted to lead a major party at that late date.

President Trump now has a similar problem with the weekend’s events in Charlottesville, Virginia. It is not that everything he has said is wrong: from his careful, prepared statement on Monday, to his ill-considered press conference rant on Tuesday, you can find the right words about racism and hate groups.

But for someone who wants to lead the Republican Party, much less the nation, in 2017, an unequivocal denunciation of neo-Nazis and Ku Klux Klan members ought to be an easy layup. Trump is instead compiling a highlight reel of air balls.

If Trump wanted to parse which rally participants were misguided but earnest Southern-heritage activists versus white nationalists (this event was so clearly organized by racists that this distinction is not made as easily as in other cases), or condemn the lawlessness of left-wing counterprotesters, he had to first make clear to any fair-minded person that he was appalled by the bigotry on display. He failed this test.

Trump’s testy confrontation with his “fake news” antagonists compounded the problem. When the president is passionate or angry, it shows. His most detailed repudiation of the racists in Charlottesville, who left one woman dead, was read calmly from a teleprompter. Trump’s indignant insistence that the media was misinterpreting him, even as there was “blame on both sides,” was fiery and intense.

Which sounded more like Trump’s outrage over radical Islamic terrorism or MS-13—his comments about left-wing violence and how the press was getting him wrong, or his rejection of white nationalists and other racists? The same believability question bedevils Trump’s rote criticisms of Russian interference in the presidential election, compared to his spirited characterizations of the Russia investigation as a “hoax.”

To make matters worse, buried underneath the bluster, Trump made some legitimate points. There is a violent, illiberal left brewing in the country, as mainstream liberals themselves have increasingly recognized. “Antifa” could soon emerge as its most visible manifestation. Pace Mitt Romney, they are not all mere opponents of bigotry; contra Jeffrey Goldberg, they are not storming the beaches at Normandy.

It is not clear that the rejection of all American historical figures complicit in the country’s original sin of racism will stop with the Confederacy, even if that is a logical line to draw. That sin did not begin—nor did it end—with the Civil War, as today’s most advanced progressives will be the first to tell you.

Some of these progressives have historically had no problem lumping “very fine people” in with racists and neo-Nazis long before Trump was a major political figure, dismissing even some of the GOP leaders now taking issue with the president as white supremacists. “Paul Ryan traffics in racism because the Republican Party is a racist organization,” a writer for a left-wing website argued in 2014. “The calculus is not complicated.”

In their telling, conservatism intentionally or not seeks to conserve white supremacy.

Trump lacks the moral authority to make any of these points effectively. He has botched almost every racially charged controversy to come up since he has entered politics—plus a few that came up long before then. He essentially began his political career by peddling a false conspiracy theory about his predecessor, the first black president of the United States. Alt-right leaders have endorsed him, even if he doesn’t return the favor. And his rhetoric does not lend itself well to leading a nuanced discussion of any kind.

But the symbiotic relationship between illiberal elements on the left and right is real, even if the moral equivalency implied by Trump’s statements is not. In its hardest core forms, the alt-right seeks to revive old racist ideologies while using the language of the newest forms of identity politics. Left-wingers who want to smash property, disrupt public talks and impose speech codes cite alt-right racists as the clear and present danger that makes their tactics necessary.

Both movements are still marginal. But the scene in Charlottesville, a departure from the more typical event in which twenty racists are shouted down by a hundred or more counterprotesters, raises fears that they are growing—and that the president of the United States has no idea how to avoid fanning the flames.