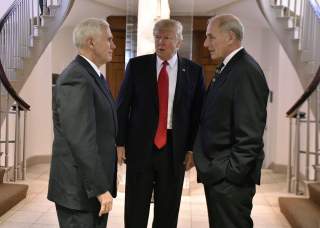 For two weeks, the White House has unleashed a foreign-policy blitzkrieg, and Washington’s chattering classes are shocked and, if not awed, at least perplexed.

CNN calls Trump’s actions a “u-turn.” Bloomberg opts for the more mathematical “180 degree turn,” while the Washington Post goes with “flipflop.” Meanwhile, pundits switched from decrying the president as an isolationist to lambasting him as a tool of the neocons. Amid all the relabeling, explanations of an “emerging Trump Doctrine” have proliferated faster than North Korea’s nuclear arsenal.

Here’s my take on what’s going on:

• No, there has been no big change in Trump’s strategy.

The actions that flustered those who thought they had pigeon-holed Donald Trump simply reflect the impulses that have driven the direction of this presidency since before the convention in Cleveland.

At the Center of the Storm

Where is the head and heart of the president’s national-security team? Ask that question a year ago, and the answer would have been simple: General Mike Flynn, Mayor Rudy Giuliani and Senator Jeff Sessions.

Today, Flynn is gone. Giuliani never went in. Sessions is still a crucial voice in the administration, but his duties as Attorney General deal only partially with foreign policy and national-security matters.

The new team centers round Jim Mattis at the Defense Department, Rex Tillerson at the State Department, John Kelly at the Department of Homeland Security and H. R. McMaster in the West Wing—ably assisted by Nikki Haley at the United Nations. Trump barely knew these people before the election.

There is little question that the new team’s character and competence affected the White House response to the recent string of high profile events and activities—from presidential meetings with Egypt and China and Tillerson’s tête-à-tête with Putin, to the ominous developments in Syria and North Korea. Though on the job for only about dozen weeks, the new administration handled a lot of action on multiple fronts quite deftly. Much of that can be credited to the maturity and experience of Trump’s senior national-security team.

But how the administration responded was purely Trumpian—reflecting an impulse that transcends the makeup of his foreign team or other White House advisors.

Since the early days of the campaign, one thing has been clear: trying stitch together an understanding of Trump’s foreign and defense policy based on Trump’s tweets and other off-hand comments is a fool’s errand. That has not changed since the Donald took over the Oval Office.

That is not to say that none of Trump’s rhetoric matters. He has given some serious speeches and commentary. But pundits err when they give every presidential utterance equal merit. A joint address to Congress ought to carry a lot more weight than a 3 a.m. tweet about the Terminator.

But especially with this presidency, one needs to focus on White House actions rather than words to gain a clearer understanding of where security and foreign policy is headed. Do that, and one sees emerging a foreign and defense policy more conventional and more consistent than what we got from Bush or Obama. Still, a deeper dive is necessary to get at the root of Trump’s take on the world and how it fits with recent actions like the tomahawk strikes in Syria and the armada steaming toward North Korea.

I briefed Candidate Trump and his policy advisors during the campaign. I organized workshops for the ambassadorial corps during the Cleveland Convention and worked with the presidential team through the inauguration. Those experiences let me observe how the policies from the future fledgling administration were unfolding. Here are some observations that might be helpful in understanding the Trumpian way.

At the core of Trump’s view of the world are his views on the global liberal order. Trump is no isolationist. He recognizes that America is a global power with global interests and that it can’t promote and protect those interests by sitting at home on its hands. Freedom of the commons, engaging and cooperating with like-minded nations, working to blunt problems “over there” before they get over here—these are things every modern president has pursued. Trump is no different.

What distinguishes Trump—and what marks a particularly sharp departure from Obama—is his perception of what enabled post–World War America and the rest of the free world to rise above the chaos of a half century of global depression and open war.

Obama and his ilk chalked it all up to international infrastructure—the UN, IMF, World Bank, EU, et al. For Trump, it was the sovereign states rather than the global bureaucracies that made things better. The international superstructure has to stand on a firm foundation—and the foundation is the sovereign state. Without strong, vibrant, free and wealthy states, the whole thing collapses like a Ponzi scheme.

Trump is an arch nationalist in the positive sense of the term. America will never be safe in the world if the world doesn’t have an America that is free, safe and prosperous.

That belief is at the heart of Trump’s policies designed to spark an economic revival, rollback the administrative state and rebuild the military. It lies at the core of his mantra: make America great again.

Even the strongest America, however, can’t be a global power without the willingness to act globally. And that's where Trump's declaration of “America First” comes in.

What it means for foreign policy is that the president will put the vital interests of the United States above the maintenance of global institutions. That is not an abandonment of universal values. Every American president deals with the challenge of protecting interests and promoting values. Trump will focus on American interests and American values, and that poses no threat to friends and allies. In many cases, we share the same values. In many cases, what's in America's vital interest is also in their interest—and best achieved through joint partnership.

Here is how those animating ideas are currently manifesting themselves in Trump's strategy:

A strategy includes ends (what you are trying to accomplish), means (the capabilities you will use to do that) and ways (how you are going to do it). The ends of Trump’s strategy are pretty clear. In both talk and action in the Trump world, it boils down to three parts of the world: Europe, Asia and the Middle East. That makes sense. Peace and stability in these regions are vital to U.S. interests and are under assault. The United States wants all three parts of the world to settle. It is unrealistic to think all the problems can be made to disappear, but it is not unrealistic to significantly reduce the potential for region-wide conflict.

The means are more than just a strong military. Trump believes in using all the instruments of power, hard and soft. He has unleashed Nikki Haley on the United Nations. He has ordered Rex Tillerson to revamp the State Department so that it is focused on the core tasks of statecraft and the effective and appropriate use of foreign assistance. He wants an intelligence community that delivers intelligence and doesn’t just cater to what the White House wants to hear. And he has ordered Homeland Security to shift from being politically correct to operationally effective. Further, it’s clear that Tillerson, Kelly, Mattis and Sessions are all trying to pull in the same direction.

The ways of the Trump strategy are not the engagement and enlargement of Clinton, the rearranging of the world by Bush, or the disengagement of Obama. The world is filled with intractable problems. Trump is less interested in trying to solve all of them in a New-York minute and more concerned about reducing those problems so that they give the United States and its friends and allies less and less trouble.

Recent activities in the Middle East are a good example. The bomb strike on Syria was not a prelude to regime change or nation-building in Syria. It was a warning shot to Assad to cut it out and stop interfering in U.S. efforts to finish off ISIS, stabilize refugee populations and keep Iraq from falling apart. Engagement with Egypt was to signal America is back working with partners to stabilize the region and counter the twin threats of Islamist extremism and Iran. Neither is a kick-ass-and-withdraw operation. These are signs of long, serious engagement, shrinking the space in which bad actors can operate.

The U.S. regional strategies for Europe and Asia are the same, and it seems clear that Chinese and Russian leaders have gotten the message. In the wake of recent meetings, both countries have reacted by treating Trump with the seriousness he has demanded. Others get it too. I’ve talked to many foreign officials who have come through Washington, DC this year and they have all told me that they got the same impression: this administration is about resolve and persistence. Still, no strategy is without risks and pitfalls. This one is no different. Here is how Trump might screw up or be upended by a smarter or luckier enemy: