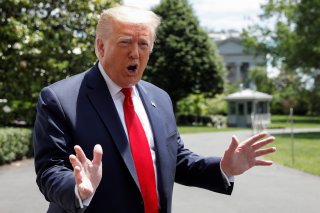 Donald Trump vowed to end American carnage when he took the oath of office in 2016. Instead, he is accelerating it. Three crises—the pandemic, the economic collapse, and racial strife—are delivering successive hammer blows to America that his fecklessness is compounding. Trump is blatantly refusing to address any of them—other than to issue inflammatory, sometimes self-contradictory, tweets. As Princeton University scholar Julian Zelizer observes, “We have a President who, unlike either Lyndon Johnson or Richard Nixon, doesn't seem to care about governance. Our commander-in-chief is far less stable than either of these men and seems willing to say and do whatever is on his mind.”

Perhaps Trump can turn the current chaos to his benefit. In the past, civil rights protests have cost Democrats at the polls. But the problem with thinking that this is 1968 all over again runs up against one big factor. Whatever he may be, Trump is no Nixon. Nixon was shrewd and calculating. He was also not president in 1968. It was Lyndon Johnson, Jr. who had to deal with America’s burning cities in the aftermath of the assassination of Martin Luther King, Jr. The Democrats suffered a grievous blow from which they never fully recovered as white, working-class voters fled the party.

Trump, like Johnson, is president, not an insurgent candidate. If the protests continue all summer, it will stand as an indictment of his failure to ensure that the law and order he likes to huff and puff about actually exists.

So far, Trump has been all over the map on the issue, snarling about “vicious dogs” one moment, sounding conciliatory about the protests at another. The fact is that Trump likes to portray himself as Mr. Ruffy Tuffy, but he has no coherent policy. Forget quelling the riots. He doesn’t even seem capable of delivering a national address from the Oval Office.

Currently, Trump is trying to have it both ways by focusing on Antifa, which he is seeking to brand a terrorist organization, rather than focusing on the rioters writ large.  Can the tumult really all be laid at the doorstep of Antifa?

Some of Trump’s top advisers are apparently warning him that he is courting further trouble with suburban voters if he is unable to show that he can end the rioting. What Trump’s advisers apparently have in common is failing to understand that it isn’t a matter of upping the rhetoric. Rather, it’s about taking tough and responsible action to quell the looting and larceny, which apparently extended to stealing not only televisions, but also ice cube trays from a business in Los Angeles. These aren’t demonstrators; they’re hoodlums. As St Paul, Minnesota mayor Melvin Carter noted, “there's folks in the street who are there to burn down our black-owned barbershops, to burn down our family-owned businesses, to burn down our immigrant-owned restaurants and it is very clear to me those people are not driven by a love for our community. And there is no way you can argue those actions are designed to produce a better future for our community, quite the opposite."

It’s not as though America’s foreign adversaries aren’t profiting from the chaos, either. Trump looks weak. Leaders abroad know it. German chancellor Angela Merkel rebuffed his invitation to a G-7 meeting this summer. The Russian Foreign Ministry issued a statement warning American police against attacking journalists: “We consider it unacceptable for U.S. law enforcement officials to use rubber bullets and tear gas against journalists after they presented a press card.”  And China is increasingly emboldened, declaring that it will “smash” any attempt by Taiwan at independence and threatening liberties in Hong Kong.

Worse is to come. Former FDA head Scott Gottlieb noted on CBS News’ Face the Nation, “There’s going to be a lot of issues coming out of what’s happened in the last week, but one of them is going to be that chains of transmission will have become lit from these gatherings.” Yet Trump has already made it plain that he has no further interest addressing the coronavirus pandemic and wants to pretend that it’s business as usual. It won’t work. What Dimitri K. Simes aptly referred to as a “perfect storm” in the National Interest magazine shows no sign of letting up. If Trump continues to go AWOL, he’ll soon find the political storm clouds becoming even more ominous for his reelection.