Trump Has a Shot at Arab-Israeli Peace 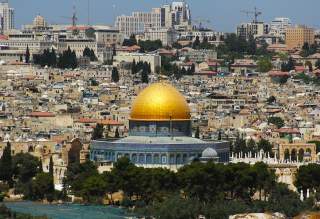 The president of the Palestinian Authority, Mahmoud Abbas, is heading to Washington, DC this week for talks with President Donald Trump. Incredibly, despite escalating crises in the Korean Peninsula and in U.S.-Russian relations over Syria, as well as huge obstacles confronting the president’s attempts to implement his agenda on health care, immigration, the tax code and the construction of a wall along the U.S.-Mexican border, he finds time for Palestinian-Israeli peacemaking. Moreover, in a span of a few weeks his chief negotiator, Jason Greenblatt, has already made two trips to the region: the first focused on canvassing the views of leaders in Jerusalem and Ramallah, and the second aimed at garnering support for peacemaking among Arab leaders.

Indeed, it sometimes seems as if every note of caution the president is given, reminding him that success in this realm has eluded all his predecessors, only motivates him further to attempt the impossible. In this context, it also seems that the many commentaries in the printed media recommending that the Trump administration encourage Israelis and Palestinians to take small steps to avert another eruption of violence, or to improve the atmospherics for future negotiations, are all beside the point. President Trump does not do “small stuff”—he is not energized by sophisticated and detailed suggestions for incremental steps. Instead, it is the prospect of concluding a “Big Deal” against all odds that seems to excite the president and ignite his imagination.

Most experts regard Trump’s talk about achieving a breakthrough in Arab-Israeli peacemaking as reflecting his inexperience and arrogance. But is this necessarily so? Is it not simply possible that Trump’s unconventional approach to policymaking and policy implementation might work, especially since all efforts to apply conventional remedies to the conflict have failed? And is it not possible that some of what most students of the presidency regard as Donald Trump’s weaknesses and shortcomings may prove to be assets when attempting to resolve this seemingly intractable conflict?

The suggestion that President Trump’s unconventional approach might succeed should begin by ascertaining why the Arab-Israeli conflict has proven so resilient to all attempts to resolve it. The first step is to acknowledge that for at least the past fifteen years, the problem has not been a shortage of ideas. From the December 2000 Clinton Parameters to the detailed understandings reached between unofficial Israelis and Palestinians in the framework of the 2003 Geneva Initiative, no stone has remained unturned and no idea has remained unexamined in the quest for solutions. Rather, the problem has been Israeli and Palestinian leaders’ lack of courage and willpower to implement these solutions in the face of the opponents of peace in their respective domestic scenes.

The second reality to acknowledge is that, in the realm of the Israeli-Palestinian conflict, the problem has never been an inability to agree on the details of the deal. Indeed, the conflict has repeatedly violated the truism that “the devil is in the details.” Here, the opposite has been the case—the devil has been in the principles, while the solution can be found in the details. The problem was not agreeing on the details of a practical solution to the Palestinian refugee problem; there are book-length proposals for complex packages of resettlements and compensations. Instead, the difficulty was with the Palestinians’ demand that their refugees’ “right of return” be acknowledged and preserved. Likewise, the problem has not been in the details of sharing control over the various neighborhoods of greater Jerusalem. Instead, the problem remains how to address both sides’ claims for exclusive sovereignty over the Holy Basin. If formulas can be found for addressing these two largely symbolic principles, then expert teams can reach agreements on the practicalities involved.

These first two realities inform the third: whenever the two sides’ leaders have wanted to avoid making the tough decisions that peacemaking required, they have drowned one another and their American mediators and facilitators in endless details. Indeed, many such details did not even concern the components of any proposed deal. Instead, they involved the conditions for negotiations, allowing if not actually inviting endless quarrels about settlement construction freezes and prisoner releases.

The fourth reality is that, regrettably, there never has been a bilateral solution to the Israeli-Palestinian conflict. This is because the solutions to some of the most difficult issues are not in the hands of the two main protagonists. The Palestinian refugee issue cannot be settled without the participation of certain Arab states in which hundreds of thousands of Palestinian refugees currently reside. Israel’s security concerns cannot be addressed bilaterally, because the Palestinians are too weak to meet Israeli requirements in this realm. And with Jordan and Saudi Arabia taking a keen interest in Jerusalem’s Holy Basin, and with Morocco holding the Jerusalem file for the Organization of Islamic Cooperation, no purely bilateral Israeli-Palestinian solution to this issue was ever implementable.

The final reality hampering a resolution of the conflict involved something that Israelis and Palestinians did agree upon but only to their detriment: namely, that their negotiations would be based on the principle that “nothing is agreed upon until everything is agreed upon.” As a result, the negotiations have become hostage to the most difficult issues, and the agreements reached regarding less demanding items were never implemented. One most important consequence of this disastrous principle was that neither the Israelis nor the Palestinians would ever see their negotiators’ endless talks resulting in any positive change on the ground. This, in turn, resulted in pessimism among the populace on both sides—pessimism that proved toxic, as neither side was willing to suspend its disbelief in the hope of ending the conflict.

Yet these realities do not mean that the obstacles to a Palestinian-Israeli deal are insurmountable. Instead it means that a deal can be reached only if the playbook on which all previous efforts to resolve the conflict is “repealed and replaced.” Replaced by what? The following are seven commandments that President Trump can adopt without difficulty, because they accord with his instincts, his temperament and his unique character.

Commandment 1: The president should avoid any expert calls for additional meticulous preparatory work. There is nothing unknown about this conflict—it has been already thoroughly and exhaustively studied and researched. The calls for further preparations are only intended to avoid difficult decisions.

Commandment 2: Invite the parties to the negotiations table by setting a date and a location for the talks. Most importantly, the president should avoid engaging in any discussion on conditions for these negotiations—a distraction that Israeli and Palestinian leaders have elevated into an art form. The parties will show up at the set location and time, because a “no show” would result in the president using his ultimate weapon for shaming those who would not show up: his Twitter account.

Commandment 3: The president should avoid the parties’ attempts to drown him and his administration in endless details. He should remember that in this conflict, the devil is not in the details. There are enough experts—a thriving Israeli, Palestinian, American and European peace industry—to work out the details once an agreement on the principles is reached. Indeed, it is especially in this realm that President Trump’s weakness could serve him well: his now-famous impatience and inattention to detail would allow him to firmly and credibly reject all attempts to drown the process in an ocean of details.

Commandment 4: Repeal and replace the principle that “nothing is agreed upon until everything is agreed upon.” Instead, as a successful businessman, the president should stress the importance of adopting a can-do mentality, and insist that the greatest enemy of peace is pessimism, and that such pessimism can only be reversed by an agreement to implement immediately any understanding reached, so that publics on both sides can see tangible evidence of progress.

Commandment 5: The president should follow his instincts and go for the “big deal,” not only by involving the leaders of key Arab states—Egypt, Jordan, Saudi Arabia and the Emirates—but by doing so in a fashion that would bring these leaders to “own” the process. This is important not only because important pillars of any Palestinian-Israeli peace do not have a bilateral solution, but also because the Palestinians are too poor and too weak to offer Israel meaningful inducements to make the concessions required if peace is to be concluded—only the neighboring Arab states can do so.

Commandment 6: Mobilize the U.S. defense community to garner the support of the defense communities of Israel and of America’s Arab allies for the “big deal.” This is of critical importance, because for Israeli and Palestinian leaders to gain public acceptance of the deal, their citizens would need to be assured that the deal would not place their safety and security in greater jeopardy. And it is only their own defense communities that populations will trust to provide such assurances.

Commandment 7: The president should reject any Israeli or Palestinian leader’s claims that he or she cannot “sell” the concessions needed to conclude the deal to his or her constituencies. Who better than America’s forty-fifth president to compellingly respond by saying: “Really? I know something about marketing. Let me show you how you can sell this deal.”